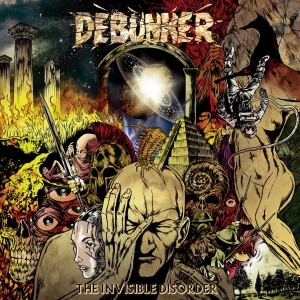 In the late 80s, thrash metal was king. Metallica, Megadeth, Slayer, Anthrax and (slightly later) Sepultura ruled the scene, but there were literally hundreds of other bands languishing in the second division whom churned out records that have stood the test of time: Testament, Kreator. The UK’s Metallica obsessed Xentrix, Annihilator…the list goes on. With a great musical blueprint, thrash never seemed to get old…and then at some point in the early 90s, as far as the likes of Metal Hammer were concerned, it kind of burned itself out.

Some two and a half decades after thrash hit its peak, Portugal’s Debunker make their entrance into the world with a superb EP that presents five tracks that pay homage to great thrash. With ‘The Invisible Disorder’, Debunker bring a very nostalgic sound screaming into the twenty-first century, adding a few of their own flourishes, but never losing sight of a classic, classic blueprint.

With a truly impressive, dirty sound and thunderous downstroke, the intro of the title track gives a clear indication of Debunker’s chief interests and isn’t a million miles away from ‘Beneath The Remains’ era Sepultura. Lightening up just a smidgeon, the main riff then moves into the verse with a Metallica-esque speed and force. Instantly, guitarists Miguel Vaquero and Carlos Barros introduce themselves as a twin force to be reckoned with and the pace throws the listener square into the heyday of 1988. The vocals aren’t always as impeccable; Paulo Rodrigues has a definite aggression when it comes to performance, but isn’t necessarily the most melodic. His voice has an edge to it that – like Blitz Ellsworth of Overkill – could be make or break for some listeners. No matter, since the music really is first rate for the style. A slower instrumental breakdown gives cheeky nods to Sepultura’s ‘Arise’ and Slayer’s career-defining ‘Angel of Death’ and the featured solos could have come from the fretboard of Andreas Kisser during Sepultura’s more thrash-oriented peak. It’s all got a touch of retro cool, for sure.

With more superb drumming courtesy of Ricardo Texiera, ‘The Logical Zombie’ has a real thrust; his playing is truly unrelenting throughout, and the ease in which he drops in a few impressive stops often suggests he’s spent his formative years studying the greats and getting all the elements of metal drumming down pat. Again, the twin riffing is commendable, often straddling a fine line between Exodus and the more contemporary Trivium. The song itself is rather silly if looked at too closely, with Paulo in full wail for a chorus that possibly only makes sense to the band, but musically, this is a genuine belter. Fusing thrash with a few groove metal elements, ‘After The War’ shows a genuine love for ‘Chaos AD’ era Sepultura with Debunker bringing as much crunch as speed – there are no surprises, but the interplay between Ricardo Texiera’s drums and Joaquim Texiera’s strangled basslines provide the heart of a thrashfest that’s thoroughly enjoyable, before ‘Redshift’ takes a similar mood and heavies it up with the kind of chugging bottom end found on the greatest Machine Head albums. Paulo shouts and belts his lungs with little restraint, while an equally unfussy harmony vocal on the chorus drives home the natural approach to the recording. It doesn’t bring much different from those earlier tracks, but it never needs to. The riffs are great and the power in the rhythm section is more than obvious. Better yet, a shreddy guitar solo shows a brilliant tone and technique, with the fretboard bashing given extra colour via a little wah wah. Provided you’re happy to accept the vocals for what they are, you’re golden…

Last up, ‘Blindsided’ throws out an intro that’s slightly inspired by Metallica‘s ‘Hit The Lights’, before launching itself face first into a thrashy riff that’s bolstered by some superb double bass drum thunder. Finally shifting into a great, uptempo metal riff, the band adopt a darker sound than before, blending the old-school thrash with a muddiness that’s occasionally a tiny bit closer to metalcore. Paulo’s vocals, often incredibly slurred and gruff, struggle somewhat with the heavier sound, growling and wailing but not always hitting the bigger notes – something most obvious on a chorus that’s broad enough to suggest a more Helloween-styled melody – but he sounds like he’s having a great time. Everything else, though, much like every other number, comes straight from the top drawer. The riffs are unrelenting, the drumming is almost an equal to the younger Igor Cavalera and the featured solos absolutely shred. Musically speaking – as if there were any doubt previously – Debunker are an incredible force; a frighteningly tight unit.

Looking at this self-released collection, sure, the vocals are occasionally a bit on the wobbly side, but few ever seemed to mind Blitz Ellsworth’s lack of finesse or Max Cavalera’s heavy accent, did they? It’s the music that matters most – and in terms of thrash, this has so much in its favour. With a few face-tearing solos and a speed that’ll snap the neck of the most demanding thrash fan, for those who still hold those albums from the first wave of thrash close to their blackened but still beating hearts, Debunker could well reawaken a little youthful spirit.