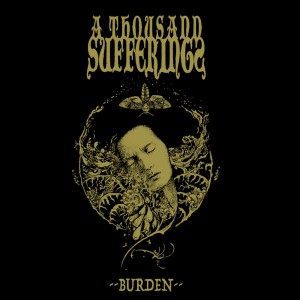 ‘Red Is Redemption (Bloodletting)’ quickly gives listeners a fair idea what to expect for the duration. Opening with a deep grumbling sound created by overdriven guitars and a cranked bass, A Thousand Sufferings churn a very slow riff. Churning is a most accurate word here as the slow pace has plenty of attitude but isn’t a riff you could summon up any more enthusiasm for than a slow repetitive head nod. Changing chords, an even darker sound comes through – a more classic stoner-ish doom tone – and with that, there’s no mistaking this band have a genuine ferocity and intent in what they do. Musically, nothing much changes for almost five minutes and then comes the best part: the arrival of a slightly bendy riff that sounds like someone trying to inject a groove into the sludge, before everything retaliates by heading into something ever more sludgy. Although the end mix is uber-sludgy, thus befitting the music, a lead guitar occasionally cuts through with an old and almost bluesy tone adding the strongest melody carried within this ten minute workout. Almost as a kneejerk reaction to this, vocalist PJ ups his game: previously, he’s sounded like a black metal shouter, but following a huge roar he now sounds like a black metal shouter whose channelling an evil overlord, his almost barking, spoken delivery sometimes rather cartoonish. That probably wasn’t his plan, but added together, everything here works effectively.

‘Black Is Burden (Lamentation)’ at first amps up the black metal aspects via a thin guitar chugging a metallic sheen, but those wanting deep and dark doom should be set to encounter even bigger thrills than before. The heavy parts are heavier, the bass is cranked for oblivion and the vocals, buried deeper, lend a much darker and ominous presence. The heaviness is superb, but on this track, it’s the quieter sections that really push the potential in A Thousand Sufferings’ brand of Euro-doom. A huge proportion of this track is devoted to a painfully slow and gothic interlude, with Jurgen’s soaring guitar lines sounding like tortured cellos, while the drums – sounding as if they were recorded outside during field work – add an unfussy and empty thud. It’s great to hear bassist Nico asserting himself so much more, too, with a thunderous sound that adds a lot of weight. During the track’s second half, everything comes together for several minutes of more traditional doom, as a heavily repetitive riff and equally repetitive vocal line punch over and over, before an almost grinding, black metal influenced lead guitar drives everything to a big feedback drenched close. It’s one of those numbers that’s so all encompassing on the senses that the ten minutes somehow feel like half that and by the end – provided the vocals haven’t put you off, it’s obvious you’ve been in the presence of some top-class doom.

‘Blue Is… (Remembering Treasures)’, at first suggests something a little mellower, with soaring guitar lines emerging unaccompanied. The tune is repetitive but pleasing, and once it’s sucked you in, A Thousand Sufferings introduce a heavy riff with such a bang, it could cause a minor heart attack. A brief foray into black metal unleashes the band’s most furious side with a faster attack, but the original tune lurks beneath always lending a contrast. With a scratchier voice than before, PJ isn’t always the easiest to listen to, but pretty soon, the band retreat to their preferred slower riffing. This track isn’t quite so pure in its doomier intents as some; there’s a load of mid paced chugging, growly vocals and more black metal quasi-orchestrations right until the point everyone explodes in an angry climax, seemingly burning themselves out before the halfway mark. From there, it’s a speedy vault-face into an extreme world of slow, dirgy riffs that either approximate Black Sabbath’s title song played even slower or the Melvins being typically obtuse. Tackling some of the album’s slowest ever riffs, the expanding space between each chord allows a ringing distortion to add to the intensity, before huge drums fill space. The more extreme edge of the sludge scale, this is a tough cookie…a very hard listen, unless in the right frame of mind, but it’s suspected that’s exactly what A Thousand Sufferings were aiming for. If you can make it past the funeral doom of the mid section, things later revert to the black-doom hybrid sound to create a base for a closing guitar solo, but by that point, there’s a sense that A Thousand Sufferings’ best work has already been laid down.

With the riffs pounding and so often unrelenting, never letting go of their squeeze on the senses, this is extremely intense – even the quieter bits. The vocals mightn’t always be entirely agreeable, but the arrangements are so well put together that the music makes up for any other shortcomings. Often more Cathedral than Witch Mountain, and with each track on ‘Burden’ just as brilliantly heavy as the one before, this disc has plenty to recommend fans of most things of a metallic, sludgy nature.