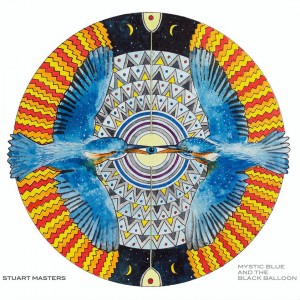 A virtuoso of the acoustic guitar, Stuart Masters creates a sound that’s been likened to Nick Drake and Syd Barrett. It seems odd that so many artistes would be compared to Barrett, given that his rather scant post-Floyd output borders on the disturbing. Aside from just about managing to string a few chords together, Barrett could all too often be heard mumbling through nonsensical lyrics he seems to only barely remember. This fourth release from Masters, the wonderful ‘Mystic Blue & The Black Balloon’, is nothing like Syd. It’s sometimes possible to hear why comparisons have been made to Drake, however, for Stuart is very fond of a finger picked style and almost pastoral moods – but the combination of his dexterous playing, loops and layered approach to most things is sometimes closer in spirit to another guitarist…and one from more recent times. It might be fair to say that fans of Matt Stevens will find an instant kinship with Masters and his complex soundscapes.

The title comes from two of the album’s compositions. ‘Mystic Blue’, a very rhythmic piece, sets a solid almost glam rock rhythm at its rear; it presents itself intermittently, and although lending a rather pointed beat, it never becomes obtrusive. It’s Stuart’s lead work that carries the tune and his finger picked melodies – settling somewhere between Bert Jansch, Steve Hackett and Matt Stevens – have a genuine buoyancy and a feelgood spirit. ‘Black Balloon’, meanwhile, is moodier, creating a quasi-melody by teasing with electronic sounds and a simple piano motif. Linking the two elements at first are lower notes in place of bass, before the sounds of soaring strings add an interesting and rather haunting counter melody. Its sparseness is key; it appears to unfold very slowly – the second part of the track even suggesting a soundtrack work. Both very different, but if played together, these feel very much of a piece – partly due to the lack of percussion, partly due to covering so much musical ground and feeling complete. In terms of hearing Stuart solo, ‘Outside The City’ really hits the mark. His loud, sometimes aggressive approach to the acoustic guitar during this track, really shows how just one man can become a full guitar orchestra; his muted strings and occasional slaps adding extra edge to the kind of busy melody with which Anthony Phillips might have teased.

For fans of a rockier style, ‘Humbug’ places clean guitar sounds over a booming, slightly distorted backdrop, before the acoustic rises from the swampiness and leads various multi-tracked guitars into a tune that (at least in places) uses harmonics in a way that shows a direct influence from Mike Oldfield’s more urgent moods. Descending into clattering midway suggests things could be derailed, but Masters quickly retrieves the main melody and hammers it home a second time for effect. Although one of ‘Black Balloon’s more immediately accessible offerings, it’s also potentially it’s weakest. There’s a strong tune, but has none of the world music elements that help the bulk of of this album appear so unconfined. With quiet droning sounds, punctuated by clean toned and high pitched guitar notes, ‘From The Deep’ is very soundtrack oriented and – as you might expect – gives a slow, swirling feeling of water, perhaps even sinking. The first three minutes does surprisingly little, but really captures the imagination; at the point where everything appears to come to a natural end, quiet bass notes provide a rhythm, the tabla a soothing melody. Masters then goes to work laying down some bright and tinkly sounds, almost as if channelling Matt Stevens. From something spacious, this number ends up with a surprising amount of depth – no pun intended – and much like the ebbing of the tide, provides no real closure… As the inevitable fade comes, you might just feel like this could have been endless.

A trilogy of compositions suggesting a centrepiece for the whole album, ‘Open Your Eyes’ begins gently with some simply gorgeous finger picked work interspersed with equally lovely chords that place themselves squarely between a high point of Drake’s ‘Five Leaves Left’ and the old Jimmy Page guitar showcase ‘White Summer’. The introduction of tabla increases the tempo, allowing Masters to busy himself with descending guitar runs, clean chord progressions and some lead work that mirrors that of a sitar. The second movement – or raga, perhaps, since there’s a very eastern focus – finds Masters unaccompanied, string bending and embarking on busy runs that evoke a late night mood, as if Matt Stevens had reworked Shankar for an acoustic loving progressive audience and is stronger than the first part. This is great, but it’s the third, combining shimmering melodies and a looped feel, that impresses most of all. Percussion free, Masters occasionally slaps at the strings to give an edge, but the main focus is that of a circular riff – a louder tone allowing the sounds of buzzing strings and frets to add extra interest. Overall, these three interlinked numbers really capture what ‘Black Balloon’ is all about: intricate musicianship, a broad musical outlook, but above all, melody. Those who love the eastern elements will also love ‘Freyja’, a number where the tabla takes on a bigger role; a few harder edges jostle for attention and the sounds of very English folky guitar work finds itself immersed in a Shankar-esque piece. Masters isn’t shy in his use of aggressive harmonics, and that alone sets this aside from some of the gentler tracks. The sounds of his strings are crystal clear throughout. In terms of guitar playing, it’s an amazing piece.

No amount of words – technical or otherwise – could replace the experience of actually hearing this work first hand. Most importantly, these tunes have a genuine sense of feeling over mechanics. Geared best of all to late night listening, this album has a similar sense of emotion, depth and heart that Bert Jansch’s playing often had, that Anthony Phillips could convey with sometimes the simplest of melodies and distinctive of tones…and all without Mike Oldfield’s often unnecessary grandeur. On this fourth outing, Masters has created a work that feels both contemporary and classic, almost timeless. Put it on, immerse yourself, enjoy. The balloon is ready to soar.