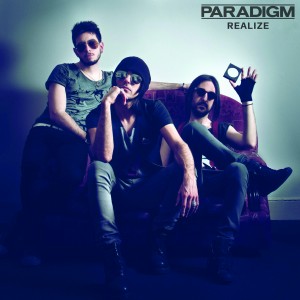 When a band has the balls to plug themselves as having “Muse’s raw power and the cinematic sense of 30 Seconds To Mars, fenced with Pink Floyd’s artistic approach” you’ve kind of got to love their fearlessness, but you know there’s a good chance you know they’ll never live up to their own hype. Press releases are often grand, but when such broad claims are made about a debut four track release, there’s every chance they’re just setting themselves up for a fall…and from a great height at that. London’s Paradigm are armed with a big sound – helped no end by producers Paul Corkett and John Cornfield (studio hands on works by Bjork, Muse, Robert Plant and The Cure, among others) – but aside from a few fleeting similarities to Muse in the guitar department, there’s little else that connects to those comparisons. Luckily, it’s Muse’s guitar crunch that inspires them and not Matt Bellamy’s godawful vocals…

Within seconds of lead track ‘Desire’, Paradigm’s brand of alt-rock crunches with a crispness, as shimmering guitars lay atop a heavy-ish riff. Pretty quickly this falls away to reveal a tough but warm bassline that recalls the 90s and provides the heart of the track. Over this, frontman Alex Blake drops into a honeyed croon that occasionally sounds like Nick Cave light, or even the darker moments of Old House Playground. Approaching the chorus, they’re keen enough to exploit a classic LOUDquietLOUD technique, and the voice raises from croon to rock belt, the guitars crash with intent and the main hook – although simple – more than does the job. During the latter part of the track, Blake even demonstrates some nifty lead guitar work. Melody, power and crunch – it’s all here…and has the hallmarks of a number that could be ten times better live. ‘Your Darker Side’ showcases a lighter side to the band at first, working a hard bassline over a clean lead guitar riff. An understated, croony vocal sounds great while heavy toms create a tough backline on the drums. It’s rocky – again, a little 90s in intent – and very radio friendly. Crashing into the chorus, the band take the opportunity to drive home a tough riff; something simple-ish, but something that delivers the goods. A louder vocal here works less well, but an edgy lead guitar break is soon on hand to entertain. In all, not as good as the opener, but ‘Your Darker Side’ shows that Paradigm really understand the importance of a good riff and easily digestible hook.

Following an intro that absolutely taps into a Muse influence, ‘Strangers’ falls into a soft groove that utilises multi-tracked guitars, echoing reverb and a very strong vocal. The baritone here shows Blake at his absolute best as he delivers each line in a manner that makes him sound like Nick Cave singing Black’s ‘Wonderful Life’. By the time the expected lead guitar break rolls around, the band switch gears and attempt something briefly rather funky, very much helping this tune sustain a breezy five minutes, before a heavy climax suggests a real power within this alt-rock trio. Despite the inclusion of a very busy bassline – indeed, most of Giulio’s best playing on this EP can be heard throughout this track – and the intermittent wall of guitars that borrows from Muse and Biffy Clyro showing Paradigm’s edge, it’s that voice that dominates and subsequently leaves an indelible impression. …And so, it’s lucky we get to hear even more of it during the closing number, ‘The Miracle’, which also features a very welcome piano part, before everything descends into punchy alt-rock. This again, shows a great melody within the band’s anger. Hearing Blake’s voice booming against a moody piano and stabbed and staccato guitar part is a joy – and he sounds more like Cave than ever, especially as he reaches the end of each line. Maybe this is the cinematic edge as promised: rest assured, though, it’s so much grander and more interesting than 30 Seconds To Mars, never once becoming reliant on a choir of whoahs for (over) effect. As Blake brings everything to a close, suggesting “the miracle is in [our] hands” and the music fades into a retro sounding echo, they’re in danger of leaving their audience wanting just a little more.

The combination of big riffs and dour voice works exceptionally well across each of these songs, sometimes as if Tindersticks had collaborated with Biffy Clyro. The sombre moods between the hefty riffs gives the material a sense of scope. Ignore the band’s own hype – listen for yourselves: based on these four tunes (three excellent, one merely very good), Paradigm have more than enough of their own talent and a collective melodic ear strong enough not to have to rely on ridiculously broad claims.