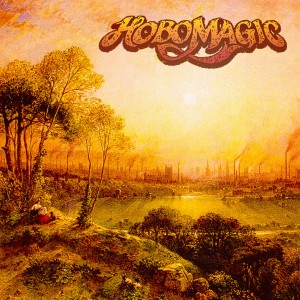 From Brisbane comes classic metal/stoner metal band Hobo Magic; a band deep into the sounds of early Sabbath and more than ready to shake their audience with a rather fierce bottom end. There are hundreds of bands out there churning out post-Kyuss riffage, of course…so many, in fact, that it’s easy for many of them to be overlooked, or indeed, lost in the noise. Fans of the style should make a special pilgrimage through the realms of the internet’s countless stoner bands to find Hobo Magic, for musically, they have something special that really sets them apart.

That something special is their choice of bass sound. It’s easy to crank up the overdrive and distortion and try and ape Scott Reeder, or the heavier parts of your classic Melvins LP; it’s far harder to pin point that threatening yet bluesy tone captured by Geezer Butler on Sabbath’s ‘Masters of Reality’, and yet, on parts of this album, Jake Bennett has done just that. The four and a half minutes of ‘Leader Deceiver’ are all that’s required to make this disc a coveted heavy riff fest. The opening guitar salvo borrows heavily from the kind of boogie edged tunes with which the Sabs experimented on ‘After Forever’ and ‘Sabbracadabra’, yet come dressed in a slightly heavier guise. This classic sound alone will please fans of classic metal, but it’s once the rhythm section kick in that the sparks really fly. Carter Veltmeyer’s drums are hard, with a lovely flat sound as per the 70s, but the warm dancing bass is the real killer. By retaining a bluesy slant among heavy and busy note progressions, Bennett ensures the music remains particularly fluid. The vocal is loud and naturalistic; Connor Mitchell’s chosen style comes across as rather shouty and carefree at first – showing an affinity to Melvins man King Buzzo. This briefly threatens to derail everything, but once your ears adjust, his booming retro style is a compliment to the heavy groove. Moving through the piece, the riffs are slow and crushing, the vocals dominant and mildly oppressive – in short, it’s classic, classic stoner, with the hard clanging ride cymbal and a busy dancing bass punctuating the end of each line. By the time the tune reaches it’s climax and the trio launch into some powerful grooves, Carter belts each line with gusto, before topping the tune with an impeccably played bluesy solo, going toe to toe with the bass, which has been beavering constantly pretty much throughout. ‘Eagle’ introduces an aggressive fuzz pedal and some killer blues guitar, as Connor tears hell from his fretboard in a style that drops somewhere between Hendrix at his most aggressive and Tony Iommi filling space during ‘Warning’. After a couple of minutes, the blues subsides and the grinding Sabbathy metal takes over. This allows for a great drum performance with some great snare work, piercing through deep bass. In the second movement, things pick up pace for furious soloing interspersed with a riff that’s a cheeky nod to Cream’s ‘Sunshine of Your Love’. Sustaining a full six minutes with their distorted blues, this trio sound unstoppable, defying any hard rock fans not to give a slow nod of approval as each note blusters from the speakers.

By track three, ‘The Lake’ it’s time for a reflective moment, as Hobo Magic trade in the huge riffs for twelve stringed acoustics and a musical soiree that’s more suited to the campfire. The overall tone borrows heavily from the Alice In Chains EP ‘Jar of Flies’ for the bulk of this trip, though perhaps seen and heard through the eyes of Corrosion of Conformity. Beneath the acoustics, Bennett brings a well crafted bass line – still of the electric variety – ensuring this slightly more nineties inspired workout still retains a huge debt to Geezer Butler. At the point where the song comes to a natural end, there’s a brief wander into some noodling atmospherics and then the band go all out with a heavy doom riff – allowing each musician to really cut loose. As before, the mix has an old fashioned and almost muddy sound, but is exceptionally well recorded for an independent release. Within this track, Hobo Magic bring a sense of all-round scope as well as a retro riff…and in doing so, prove they are as good as – if not better than – any other Sabbath-obsessed revivalists out there.

Another subtle-as-a-truck tribute to Black Sabbath informs the riff that powers ‘Walrus Tusk’, this time utilising a slightly lower budget sound for extra grubbiness. The bass is absolutely stellar in the way you can almost hear each note being plucked slowly as if in the studio space with them. The over-riding mood is doomy, like a cast-off from the first Down LP and while it could be argued it doesn’t score any points for originality, once again, it’ s a performance that just cannot be faulted. The vocals drip with attitude in the way they confront the listener, but more than ever here, Carter comes across as an absolutely superb drummer, bringing the fills of Bill Ward with flourishes of Dale Crover’s unhinged approach, resulting in a show-stealing performance.

The final pair of tunes bring more of the same, but if anything, are occasionally even heavier. The first half of ‘Wheels (Sludge Lung)’ sounds like the bastard sons of Goatsnake stealing Tony Iommi tones while a man shouts in a Kyuss-like manner. Heavy as it may be, Hobo Magic show a genuine class by ensuring the spirit of heavy blues outshines oppressive purest metal and beneath the crushing riffs, the bass retains its usual joyous fluidity and the string-bending during the lead guitar fills is top notch. Realising this might not sustain a full seven minutes, there’s time for a psych interlude en route. While not as spacious as ‘The Lake’, it still very much aims for the head and gives the feeling of being lost somewhere in the outback under a burning sun, and – once again – provides a great showcase for the rhythm section. Coming to a finish with some bluesy power trio grooves with plenty of oomph, this is Hobo Magic’s finest offering. Stretching to a full eight minutes, ‘Witchcurse’ at first reinstates the kind of swinging looseness that informed the opener – a great vehicle for all, with Carter’s guitar tones being particularly appealing – before launching into a heavier sound during the chorus. Interestingly, the vocals have a touch of the Hetfields in the way each line is over-pronounced, but combined with a crushing guitar part and clanging ride cymbals, it never ever feels forced. Much like ‘Wheels’, a spacier mid-section allows for a breather, before the big grooves kick back in for a great finish. In all, this number provides plenty of heads down no nonsense stoner sounds…and by the time it ends, you might find yourselves reaching for the play button straight away.

Move aside, Orange Goblin; be afraid, John Garcia; look on in awe, Electric Wizard…for these three Aussies are a match for anything you have to offer. In terms of old-school stoner rock – particularly that which is unashamed in it’s undying love for the first four Black Sabbath records – you’ll be hard pressed to find better than this. The vocals might be an acquired taste, but make no mistake, when played loudly, this album has all the makings of a future classic.