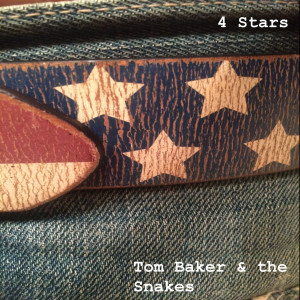 “Ah. What’s that, K-9? A huge sound coming from that far off nebula? Things might get rocky, so you’d better stay and guard the TARDIS.” It’s hard not to hear the name Tom Baker and not visualise a curly-haired, long-scarfed eccentric and his camp robot dog, isn’t it? Well, joking aside, here’s a different Tom Baker for you: a Boston native primed and ready to crack your skulls with a semi-raucous three guitar assault. To kick off 2016, Baker, sometime member of The Dirty Truckers, has teamed up with various other Boston alumni – fellow Trucker John Brookhouse (g/v); Gymnasium’s Charles Hansen (g), John Sheeran of Family Township (bass) and Watts’ tub thumper John Blout, all of whom are on hand to bring more than a touch of their own Stones obsessed style on three very sweaty and shamelessly retro numbers.

Things get off to a decidedly shaky start, however, with ‘Doll Eyes’ – a mid paced workout that should have been a belter. The guitar tones are superb, occasionally leaning towards one of The Replacements‘ slightly drunken affairs, overlaid with a sunny Soul Asylum-esque lead. Beyond the brilliant melody, the song kind of lumbers: the vocals aren’t so inspiring; a little too drawling, while a one-line chorus makes everything feel incomplete. Various spins make it sound better than first appears, but it’s easily The Snakes’ weakest track.

From here on in, though, the huge appeal of The Snakes – provided you dig the style and at least one of the bands involved – is more than obvious. Taking the blueprint of one of Tommy Stinson‘s Bash & Pop tracks, ‘High & Tight’ is a terrific bar-room rocker, a bit like experiencing a Stones vintage from 1974 retooled by a Minneapolis bar band. Tom’s scratchy voice is perfect for the job in hand this time around, while the collision of dirty rhythm guitar and clean ringing lead is pleasingly grubby. Stoking up the speed, ‘Waiting For Nothing’ tops everything with a raucous Watts-styled rocker. Throughout these three minutes, Baker bellows like his life depends on it; the guitars have a more than Izzy Stradlin cool and a busy, dancing bass suggests there’s often far more going on here than first appears. Factor in at least three smoking lead guitar breaks and this quickly becomes the EP’s stand out, streets ahead of ‘Doll Eyes’ and the sound of a band ready to work their audience into a mini frenzy.

‘Four Stars’ is pretty much everything you’d expect given the musicians involved. The Snakes wind up the sound of The JuJu Hounds caked in extra beer and perspiration, or perhaps even channel Gilby Clarke on some of his more Stones-centric rockers and when they get it right, do it better than most. These three songs team up various cult figures for retro fun and that general feeling of good times during the recording process really comes across. ‘Doll Eyes’ kind of misses the mark, but the other pair of tunes are almost guaranteed to thrill followers and admirers of Watts…and that’s enough to warrant the short amount of listening time required to soak up this trashy goodness.