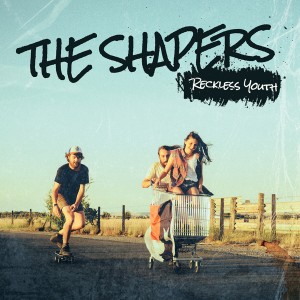 Since their formation in 2009, French punks The Shapers seemed to constantly be on the road. Their high energy melodic sound saw them travel the globe – including a visit to Thailand – and also score high profile support slots with classic bands Pennywise, NOFX, Face To Face and others, all without the aid of an extensive back-catalogue.

The appeal in the band is instant; ‘Can’t Forget’, the opening track of their 2016 EP ‘Reckless Youth’ provides the kind of incessant hook you won’t forget. A mid-paced alternative rock crunch informs a big sounding intro, and then tackling a punk-pop riff that encapsulates something familiar, The Shapers bustle with a great energy. The main thrust of the tune shares many traits with the early Sum 41, particularly in the way the chunky guitars drop into big riffs between throwing out staccato sounds with a punky ferocity. The vocal, meanwhile, is equally melodic, showing what MxPx might sound like with tough Euro accents. The use of drum loops near the end is a very unexpected twist, as is the inclusion of edgy, buzzing keys more akin to an industrial workout, but it all adds up to an interesting listen. Kicking off with a flat drum sound and the squalling sounds of feedback, ‘Secrets’ offers something a little different. An equally hooky chorus, this time featuring a dual vocal, makes the track an equally strong offering, but during the verse, a distorted vocal and choppy guitar adds a little new wave, while a brilliant pre-chorus finds The Shapers more in tune with garage rock sensibilities than straight up punk-pop. Three distinctly different moods glued together without sounding messy (largely thanks to a Hives-esque pre-chorus), this really shows off the range of talents within this trio…and then, as the track comes to a close, a swift key change and completely new melody sweeps in. In lesser talented hands, changing tack in such a way could be in danger of sounding like a bolted on afterthought, but here, bringing a further upbeat vibe, it’s the sound of a band pushing ever forward, and while it leaves the listener hanging just a little, it ends this particular track on a high.

Taking the Sum 41 edges from ‘Can’t Forget’ and creating something equally likeable, ‘Another Chance’ mixes shouting gang vocals with another strong chorus, this time with the bass pushed farther to the front. The chords come thick and fast – in terms of riffs, the slow crunching intro represents an EP high point – while ringing leads add to the energy. As with ‘Secrets’, the band are keen to not fall into too much of a predictable groove either; at the point where you’re either expecting a key change, a spiky guitar solo (or perhaps even both), that time is spent playing a sub-Nirvana style 90s throwback of a riff – this time very much sounding like it was intended for use somewhere else. It’s not too distracting, though, and once again helps give a fuller picture of The Shapers’ influences, but despite all the twists and turns, it’s the chorus that wins out – making a hat-trick of user-friendly hooks. A slight downtune gives the intro to ‘Youth Disaster’ a strong alt-rock edge, and once rattling almost militaristic drum lines and a tough melody take hold, it remains more emo/alt-rock than the previous tracks, this time showing a defiant love of later period Blink-182 in the way the vocals straddle the guitars, until eventually exploding into a shouty, multi-voiced climax. Fans of the style will certainly enjoy what they hear here.

In a complete change of mood, the other two numbers dispense with all things punky. ‘Lonely Moments’, a tune as wistful as its title suggests, brings acoustic guitar twiddles in a downbeat mood, it’s gentle approach reminiscent of a theme tune for a 1970s childrens’ TV show with puppets, while ”No Regrets’ showcases those acoustic moods in a more conventional style given the release in question. Bringing forth a crisp twin acoustic guitar sound and harmony vocals, this reflective tale of teen relationships that sounds like something culled from the New Found Glory back catalogue. A couple of smart lead twiddles top everything off nicely, bought to life by the mix which is so much more centred on the guitars than the vocals – which, in turn, sound a little rushed with their live in the studio feel – but, even so nothing ever rises above being pleasant. It’s not that its a bad song, per se, but The Shapers have already proven their mettle with the punky tunes and this – along with the instrumental – feels rather light. It is obviously important to the EP, bringing a further look into The Shapers’ range of talents, but it’s hardly likely to challenge the bouncy, full electric punk-pop in most listeners’ affections.

Hearing the band playing at full pelt, particularly on those Sum 41 inspired tracks, it’s very easy to see how The Shapers scored places on influential punk bills at such an early stage in their career, and this EP really captures their youthful spirit. If you like well-crafted punk-pop, big hooks and an all-round sense of vigour, then ‘Reckless Youth’ should be on your list of things to check out.