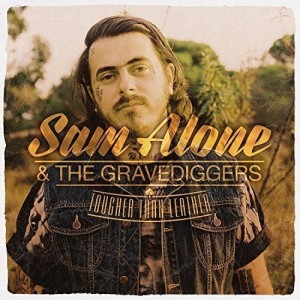 On this 2016 release, among other things, Sam Alone sets out to recount tales of blue collar strife. Armed with a booming voice and a guitar he calls his “working class rifle”, the Portuguese performer could possibly be accused of trying just that little bit too hard to appeal to the working class listener. And with an obvious love of Springsteen, his sounds are familiar sounds enough, but does he – and his band The Gravediggers – have what it takes to make an impression, especially treading a path so many have stomped down before?

Not instantly. ‘Believers & Renegades’, used as opening gambit, works around some heavy acoustic rhythms, an accordion sound, clanging bells and a voice that’s so loud that it’s positively distracting. Sam wears his influences so proudly upon his sleeve that it’s almost plagiarism, though without any real evidence of The Boss’s undeniable song writing talent. If anything, this uninspiring arrangement almost sounds like Adam Sandler’s impression of Springsteen – as bombastic and stupidly grand as flattering. Four minutes of this and it’s enough to make you not want to bother with the rest of the album – heavy handed doesn’t even begin to describe it. ‘Gardens of Death’, which follows, is better right from the outset. The music still has a well-worn blue collar Southside Johnny and Springsteen obsession that’s about as unavoidable as a mallet in the mouth, but there’s something in the arrangement that works more naturally. Firstly, the opening guitar riff – somewhere between something by Little Steven and Dire Straits circa 1980 (the year they worked with Roy Bittan and side one of ‘Making Movies’ was so obviously Broooce-oriented) – has a class and a tone that is uplifting. Secondly, the song’s main hook, although sounding rather ordinary at first, is one of those you’ll find lodged somewhere in your subconscious ready to strike several hours – or even days – after you’ve listened. The combination of melody and rhythm shows off the best from all concerned. Sam’s voice still represents “acquired taste”, but it’s perhaps fair to suggest that had this song appeared on Springsteen’s own ‘Working on a Dream’ it’d eventually become a fan favourite. In fairness, perhaps this should have been the opener…

Lifting the spirits with some good ol’ fashioned sacrilege, ‘God’s Not Around’ is a superb stomper – not a million miles away from Springsteen’s work with the Pete Seeger catalogue crossed with a bit of Mumford-esque gusto (sans banjo) – where the whole band appear in a perfect union. The hard strummed guitars are the best of buskers-ville; the hard back line makes good use of a snare drum and the gang vocals are spot on. It helps that the unison within the gang vocals takes some of the focus from Sam, but even then, he’s on hand with some great lyrics, touching on a direct theme of how higher powers are of no help in times of crises, culminating in the rather blunt pay off that “God doesn’t care!”. Energy, power and an impressive upright bass – it’s all here and it’s a strong indicator that this band are quite talented; it’s such a shame that most of the material on ‘Tougher Than Leather’ never quite matches this. ‘Shadow of the Hero’ kicks off with a rolling drum and bluster that sounds like the work of a rock ‘n’ roll band about to mangle a theme by Ennio Morricone, before dropping into some rather more predictable New Jersey blue-collar rock. In fairness, though, this manages to outstrip most of the tracks in terms of performance. Sam’s got bluster – though less than usual – Joao Ricardo plays some bluesy electric leads with utter ease and the hook is a hugely melodic one. Taking this from being a good track to a great one, guest vocalist Inês Miranda steps in for a co-lead vocal, her huge and curling voice bringing with it a kind of bar-room panache that’s certainly most welcome indeed.

‘Sacrifice’ makes best use of a strident acoustic guitar, sitting nicely against understated piano and pointed bass work. It’s a pity that such a naturalistic tune could not be put to a more effective end: beyond a couple of optimistic whoahs, there’s nothing else of any real melody. The lead vocal – a shouting and blustering affair suggesting “we struggle, we survive, time waits for no man” recycles one too many cliches at top volume, while the suggestion that there’s “no sun in the back yard” leans too far towards heavy handed metaphor and potential self-pity. Much better, ‘Gifted’ blends a stabbing, almost seventies rhythm and natural delivery and heartfelt lyrics; the end results aren’t always a million miles away from The Gaslight Anthem, though the pace occasionally feels a tad lumpen. Making up for the lack of lightness in parts of the arrangement, an understated lead guitar solo proves a high point as clean notes jostle in the right speaker channel and the stabbing piano rises to dominance. The gang vocals on the chorus, too, are strong enough to stand as one of the album’s better attempts at togetherness, even if the hook never quite manages the same indelible class of ‘Gardens of Death’.

Elsewhere, ‘Coffins & Dog Tags’ finds Sam opining on the horrors of war in a manner that sounds like a Nato Coles demo with some pretty scary off-key vocalising to boot and the title track tries too hard in the union bating Pete Seeger folk traditions via a dodgy Bruce impersonation…and yet, somehow, by the time this tune is almost done, it’s hard not to feel a soft spot for it! ‘Another Mile’ shows off a little Gaslight-esque jauntiness and has a surprisingly positive feel while being lyrically reflective (though lacks a good chorus), before ‘Crucify’ reverts to some obvious Springsteen-isms. These tunes are often well played enough, but ultimately, the latter has the potentially negative effect of making the listener pine after ‘Lucky Town’ instead. None of these numbers hold a place as being the album’s worst – the opener has that dubious honour in the bag – but it’s often clear that The Gravediggers are capable of more.

Some of these songs are perfectly rousing – a couple even excellent – and it’s always easy to hear where The Gravediggers are coming from. The poster child for “mixed bag”, most of this album starts to sound better after a few spins, but few could deny there are bands out there doing similar work in a superior fashion. Despite sterling efforts and best intentions, this fourth release really doesn’t hit the heights of either Nato Coles or The Gaslight Anthem at their best. ‘Shadow of the Hero’ and ‘God’s Not Around’ surely hint at far greater things, but when approached as a whole, ‘Tougher Than Leather’ is not so much working class as workmanlike.

[Although recorded in 2014 and released in Portugal that same year, ‘Tougher Than Leather’ finally got a belated UK release in the first quarter of 2016.]