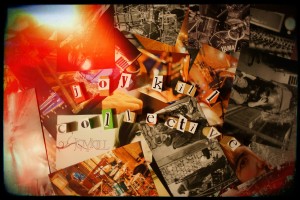 Joykill Collective are a collective in the genuine sense. Formed in the attic of a shared house, the band are not a band at all, but a gathering fronted by a man named Leif, whose primary interests appear to be music and left-wing politics. With friends, he created music, grew his own food in a rooftop garden and shared political ideals. This debut EP collects the Collective’s earliest recordings, four songs of heavy-ish, guitar driven indie rockers that often have a sinister edge, conveying the dark political times in which they were written.

Opening with thick, ringing chords and a dour voice, ‘Liberty Taker’ suggests we’re on route to a pseudo-gothic soundscape and then things swerve into a guitar driven, middling indie rocker that occasionally sounds like it is attempting to recapture the sounds nineties bands like Catherine Wheel, though does so without any of the sparks. On the plus side, there’s an attempt at a chorus and some quasi-harmonious whoahs trying hard to lift the spirits, but none of this distracts from the fact the arrangement is rather ordinary, to say the least. More interesting, though not as hooky, ‘Battle Cry’ sums up Leif’s vision via a “disaffected call to arms”, and even more swirling nineties sounds. There’s familiarity in the music, but it’s given a swooning extra layer with a collection of filters and multi-tracked guitars. Vocally, things often veer towards the naturalistic and – at first – you might just find yourselves feeling underwhelmed. Hearing it again is just enough to suggest the root of the musical idea is solid, even if the results aren’t always as striking as perhaps they ought to be…and eventually, this track’s hook, hitting hardest during the climax via a shouted refrain, gives at least half a feeling of urgency. But, as with the opener, even the best moments just aren’t sharp, or indeed, striking enough to make Joykill stand out among literally thousands of other bands. Both songs could probably be best described as bland and rather non-committal.

The second half of the EP shows a small improvement, although most of the musical ideas still struggle to reach their peak. Combining guitar drones and spooky rhythms, ‘Lies & Gold’ works a rather disquieting mood, where gentle vocals dominate. This is streets ahead of the rest of the material, suggesting Leif possibly knows a strong harmony when he hears it, that melodic edge providing a great contrast with the warm bass and intermittent soaring guitar sounds. With the arrival of a chunky guitar chord signifying a climax, there are surprising hints of Bruce Soord and The Pineapple Thief and the suggestion that this track is really going places…and then it stops. Unnaturally. Such promising beginnings and then an almost inevitable disappointment. Is this a musical reworking of how life sometimes lets us down, or is it that Leif just doesn’t have the conviction necessary to push his best ideas forward? It’s very likely the latter as – although an improvement – this has the feeling of being helmed by musicians who just weren’t ready to put these ideas on tape for the world at large. Although marred by a muddy sound, ‘Game Show’ has a huge metallic riff, resulting in something that sounds like another Bruce Soord composition fighting against a Biffy Clyro groove. It then all falls apart with some off-kilter clanking and although eventually recovers via a reasonable hook, there’s a nagging feeling things should have turned out better than they did. Like ‘Lies & Gold’, the vocals are a huge improvement on the earlier tracks and the main riff is solid, but a tendency to try and make things cleverer than they needed be makes this rather frustrating.

Joykill Collective have toured far flung corners of the globe under their own steam and also shared stages with Frank Turner, Skindred and Bullet For My Valentine. Looking at these facts in a very straight sense, it’s not really obvious how they ever scored those support slots. ‘Lies & Gold’ just about makes this release worth a cursory spin, but mostly, the songs just don’t grab the attention.