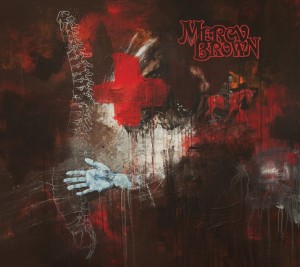 Mercy Brown’s debut album is a sledgehammer of a release. This Washington based band clearly aren’t keen to mess around; while not always the easiest of listens, this first full-length comes loaded with riffs the size of juggernauts, a production value so entrenched in bottom end that even the biggest riffs sound bigger still and their pneumatic rhythmic assault that’s like being repeatedly slapped in the mouth. They’re very much advocates of metal with a capital M and appear to have no time for the moulded and more mainstream bands that have so often filled the metal TV channels like Scuzz during the previous couple of years before this release.

After a lengthy intro of droning sounds helps build just the right amount of tension, ‘Birds’ explodes in a complete and utter fury, as triggers give the drums an uncompromising pneumatic edge while the guitars cut into some deep thrash. What’s more, anyone expecting vocalist Sara Hatchett to add a counter melody to temper things accordingly will find themselves on a hiding to nothing, for throughout the bulk of this track she possesses one of the most demonic growls ever – a voice that occasionally makes Arch Enemy’s Alissa White-Gluz sound positively angelic. With the band thrashing at full bore and a guttural roar to suit, this can quite wearing, even by extreme metal standards. However, what these guys have – a technique sometimes lacking in their closest peers – is the knowledge that just a little lightness has the potential to make the material even stronger, so by the time the chorus presents itself, Hatchett switches her style for a pseudo operatic cry. It’s just as difficult to ascertain any lyrics, but it’s quickly evident that this is a woman who possesses a genuinely impressive vocal range. In under five minutes, there’s every chance that Mercy Brown have either grabbed you or lost you. But…if, at first, this seems just a little too heavy, don’t give up, as there’s more varied material to be heard as the album progresses.

At the heart of ‘Hidden In Plain Sight’ – an instant standout – is a huge riff. Mixing a heavy downtuned almost stoner sound with the kind of riffs that made Machine Head’s ‘The Blackening’ a near-peerless work, Mercy Brown really capture a truly powerful sound. Against the riff, Sera chooses a clean vocal that in part sounds almost like spoken words – mixed very low – which she then contrasts with a hugely impressive, belting wail. Her style, not a million miles away from Nightwish’s Floor Jansen has a presence that captivates and sounds forthright without resorting to the style’s more typical traits. The rest of the band play heavily but often with a spaciousness that allows that vocal to cut through. With the second half of the number working some severe instrumental chops, though, the gloves are truly off: guitarist Chris Tanaka Canwell plays a succession of mangled and distorted notes by way of an inventive solo, thus leading the rest of the band into a frenzy of death metal grinding. The speed and ferocity of the players is impressive, especially thanks to a great production job that ensures each contribution can be heard clearly. The death metal traits take hold a little farther during the bulk of ‘Red & Yellow’, a number with a narrower appeal, but hearing a hissing and thoat-wrenching vocal pitched against some fantastic drumming, this is the sound band out to take on the world. The uncompromising style is made all the more impressive by the unexpected arrival of a chorus that presents a clean vocal – one of the album’s strongest – against a more alternative metal groove. That won’t be enough to win over those who look for clean vocals more often, of course, but with such a tight set up it’s obvious these guys do the death thing very well indeed.

For riffs and clean vocals, ‘News Complaint’ absolutely slays. The tunings suggest a groove metal love with a powerhouse riff that’s about as good as any as you’ll find. Against Canwell’s huge tones, Hatchett screams like she’s fronting an anarcho-punk outfit until Lundon Herndon cuts loose behind the drum kit and steers everything into a swirly mass of death metal anger. Dropping her voice to a menacing growl, Sera goes back to dominance and the band pulls a couple of minutes of top-class thrash out of the bag. There are at least four distinctly different moods within this one short track. This gift for variety and potential adaptability hasn’t gone unnoticed either: on the live circuit, they’ve shared stages with doom bands, death bands, industrial groups and more classic metal styled bands alike – even including supporting the mighty Machine Head. Combining some tough metalcore traits with solid, downtuned riffs, ‘One (The Edge of)’ really highlights Canwell’s harsh and heavy approach to the guitar, with many of his chosen tunings jarring against the lead vocal. Not to be outdone, Sera’s already forthright screams are multi-tracked against death metal grunts for that all important intensity. At the point where this could end naturally, Mercy Brown allow their listeners a glimpse of yet another musical trait; taking a guitar, a cranked amp and grumbling bass, they embark upon a couple of minutes’ worth of dark ambient droning. The effect is like hearing a work in progress for a horror movie, showing that there is just as much threat when Mercy Brown scale things back and attempt something quiet and atmosphere driven.

With more of a musical kinship with alt-metal and the djent style, the epic ‘Where The Fire Is’ allows bassist Josh Schultz to demonstrate his talents as he slaps out a huge sound that sounds like the intro to Faith No More’s ‘Falling To Pieces’ – only with enough oomph to make it sound as if being played by three bassists simultaneously. That bass lays the foundations for a shredding guitar line and some great drum fills. The slower and more menacing style rarely stretches beyond a hearty grumble which gets a bit wearing (especially given the six minute duration), but the decision to place something so heavy against a clean vocal shows utter conviction and sheer balls, which in some ways totally encapsulates the Mercy Brown musical ethos. The belt in the voice often sounds as if Sera is singing a completely different song…and it’s genuinely unsettling. [As a sidenote, it would be interesting to hear Mercy Brown’s take on ‘Surprise! You’re Dead!‘ They could pull that off, for sure.] The album’s strongest number, ‘Co-Dependent’ is sludgy, incredibly heavy and, by turns, surprisingly atmospheric. The guitars first present themselves in a jarring, discordant style – much like an intro from the Korn debut – but by the time the drums kick in, they shift to a hefty downtune and chug out chords in a deep djenting style, while the drums pummel rather relentlessly. Throughout the almost industrial sounding verses, the vocals veer closest to clean singing, with Hatchett tapping into a spooky vocal that’s made all the more other worldly by echoing effects. It’s an interesting counterpoint, like hearing a goth metal band reworked by a technically brilliant metalcore outfit. In this case, those atmospheric verses carry the whole number to victory – the chorus, a brief burst of thrashing that allows Hatchett chance to clear her throat seems a touch distracting by comparison. What becomes clear here, though, is that this number is so clearly a vocal showcase; nothing upstages Sera’s performance, right to the point where you’d expect a guitar solo might appear, but instead, the band descend into a spiral of death metal pneumatics and then give up and go home. This is the work of an adventurous band, keen to push their metalcore and death metal techniques in new directions.

The remaining material gives further insights into similar styled heaviness driven by a talented drummer, which for those keen on things at the more aggressive end of the scale should provide more enjoyable listening. One of the heaviest albums of 2015, Mercy Brown’s debut has some obvious standouts and when the band are at the top of their game, there is some great playing to be heard. It’s all pretty uncompromising, of course, with little to no chance of breaking through to a wider audience. That said, fans of Arch Enemy and The Agonist should very much feel at home.