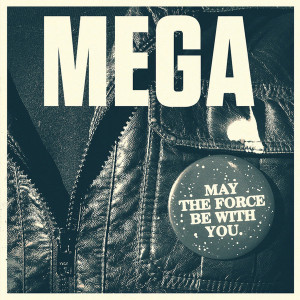 In tribute to the release’s Star Wars themed title, the fun ‘Jedi Knight’ does not disappoint. In just over two minutes, there are rollocking punky riffs a-plenty, kicking off with a timeless staccato rattle, before expanding into a four chord, crashy affair. Lyrically, a strong accent makes things occasionally hard to swallow, but sentiments like “I’ve got a light sabre, so the game is over!” place this on a par with Ash’s ‘Kung Fu’ in terms of dumb comic book fun. There appear to be suggestions that this Jedi knight isn’t a complete hero, he may even “make you cry”, so maybe it’s best not to always judge things on first appearances. A relatively harmonious chorus is on hand for extra uplifting listening, while loudly mastered guitars ensure a raucous end result.

In under three minutes, the band plough through ‘Subway To Hell’ and ‘All I Want Is You’, with garage-fuelled abandon. Initially, ‘Subway’ suggests it may have more then a passing resemblance with the likes of Screeching Weasel, but it pretty quickly asserts itself as a tune slightly more garage rooted, especially with the heavily overdriven guitar style. As before, it all hangs on a chorus, and here – despite none of the band being particularly polished in the vocal department – things swell into a relatively melodic hook; simple, direct and memorable – pretty much all you’d ask for. With a more sentimental slant, ‘All I Want Is You’ hits the mark, bringing a big chorus and gruff harmony to life. In under two minutes, the band assert their gifts for speed and tightness, though the production style may not always appear the most attractive to those looking for a cut ‘n’ paste Ramones tribute (although, one of the other tracks more than delivers in these respects).

Stoking up the quotient for staccato riffage, ‘Never Known’ brings out the big guns, mixing punky chops with a harsh ringing guitar rhythm, a punk ‘n’ roll lead and occasional forays into bottom end dirtiness. The most complex of this batch of tunes, the rock ‘n’ roll leads really catch the ear, while a more user-friendly vocal tackles a simplistic chorus hook. Bringing a slight sixties pop influence to proceedings, ‘See You In Slo-Mo’ is a touch more sugary, befitting of the repetitious hook, but is otherwise business as usual, while in terms of the sixties slant, ‘Never Wanna See You Cry’ fares much better, focusing more on strong harmonies almost throughout, much like one of the Ramones’ odes to love at the burger joint. For both melody and memorability, though, ‘Headphones Girl’ outshines them all, bringing a poppier slant to the song writing, without compromising any of Mega’s grubby DIY sound. The tones and harmonies borrow rather more strongly from the Ramones school of punk-pop, the song writing is strong and – while still accented enough to give away Mega’s geographical roots – the vocals are very assured. In terms of punk-pop, this trio of tunes really pleases.

‘Useless Song’ brings a tongue-in-cheek nod to the legacy of Joey & Johnny, opening shamelessly with a riff akin to ‘Beat On The Brat’, before settling into something more distinct. Beyond the opening riff – returning sporadically for good measure – this is a number which showcases the musical talent within Mega, more so than most of the other tracks. The main guitar riff is ragged but solid; the vocal harmonies once again present and correct, but a twin guitar lead filling the closing bars brings an element of the unexpected. With a tone closer to rock than punk, this approach really fills out the arrangement and ends things on a high.

Granted, Mega don’t really think outside of the box in terms of arrangements, but these eight tracks show them as really solid players on the DIY Europunk scene and ‘May The Force…’ brings approx fifteen minutes of high energy fun. Recommended if you like classic punk-pop delivered with a slightly rawer quality.