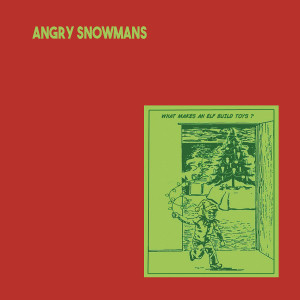 It’s hard not to take an instant shine to something that borrows a Minutemen album title and sleeve art and then uses it to its own advantage, but just one listen to the opening track ‘Bing Crosby Wrote Festive Christmas Songs’ (obviously a play on Minutemen’s own ‘Bob Dylan Wrote Propaganda Songs’) is all that’s needed before this EP becomes labelled an instant classic. Once you’ve finished laughing, lending a closer ear to the performance highlights a tight band. It takes some talent to even attempt to recreate a Mike Watt bassline, but Jeff B. Jingle does a bang up job, rattling his bass at breakneck speed, while frontman Old Saint Dick bellows in the manner of D.Boon rather effectively. In time honoured tradition and in a real homage to the original, it’s pretty hard to decipher any lyrics beyond the shouted title, but the performance is pretty amazing. Fans of the Minutemen will find this highly amusing while marvelling at the sheer audacity of it all. In twenty five seconds, a crass Meatmen inspired hardcore ditty hints at a possibility of a giftless yuletide (‘Naughty Children Suck’) before ‘Christmas Spirits Dying’ – a wry reworking of the lesser-known Zero Boys number ‘Civilizations Dying’ – allows more potential to stretch out. Just as the Minute- and Meatmen tributes show dexterity and speed, this shows a knack for a solid garage punk crunch. With a guitar tone and riff that sounds as if it could drop into Descendents ‘Suburban Home’ at any second, the band lurches through two minutes of fury, with Nick’s voice drawling like a cross between Paul Mahern and Darby Crash, but very occasionally developing a Misfits-esque croon. This live in the studio recording mightn’t be a focused as the Zero Boys’ own (non-festive) original and the lo-fi recording doesn’t always help the humour to come across as blatantly as it does on a couple of the other tracks, but it carries the sound of a pretty uncompromising performance.

For more hardcore thrills, Angry Samoans (an obvious and seminal influence) get torn a new one as ‘Steak Knife’ becomes ‘Sleigh Ride’ and then played at lightning pace, while Subhumans’ ‘Oh Canaduh’ (now ‘Oh Santa Claus’, with holiday lyrics to suit) sports a fat bass tone, a barrage of gang vocals, sleigh bells and a cheeky nod to ‘Jingle Bells’ for that extra festive necessity. It seemed unlikely that anything would better the Minutemen homage that kicked off this collection, but a rather juvenile reworking of Black Flag‘s ‘Nervous Breakdown’ trumps everything. The buzzsaw guitar intro is spot on while the unhinged vocal really captures the essence of a great Keith Morris recording. With a backdrop so familiar, it’s utterly inspired the way a vocal that was once about being truly on the edge now tells of the frustration of taking the decorations down once the festivities are over. If you love Black Flag and have a sense of humour – something oft missing from the Flag after Morris’s departure – this is destined to become a favourite festive ditty.

Novelty records are a funny thing. Not because they’re necessarily funny “ha ha”, but rather more because anything with a novelty bent is sure to wear thin fairly sharpish. Angry Snowmans are smart – their humour isn’t as clumsy as some novelty acts, their choice of source material is spectacular and their playing – in hardcore punk terms – is as good as any band taking their art 100% seriously, almost to the point where we feel we ought to know who these guys really are when doing their “day jobs”. This EP will see you through any festive faux-pas. It’s a short burst of fun, guaranteed to bring a sense of the stupid to any gathering…and if that’s not enough, their Black Flag piece rivals the aforementioned Toblerone tune for the absolute highlight of their on/off career.