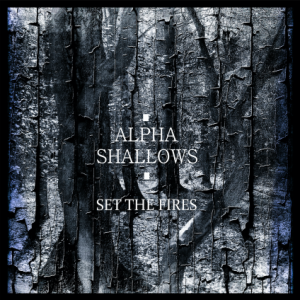 Alpha Shallows are an indie/alt-rock quartet from the north of England whom set about making some fairly weighty sounds on their debut EP. These four songs, always heavy on the guitars, often appear quite interesting in terms of creating a good balance between retro influences and something a little sharper and more distinctive.

Not going in lightly, ‘Temper’ presents a sprawling six minute workout that opens with discordant finger picked guitar lines and an occasional crashing chord. The heavy guitar chord, adding a slight post-rock edginess grumbles beneath the verse, while frontman Craig Walker marks an unsure presence, his gravelly voice rising and falling between a mumble and off-kilter cry. One of those love/hate voices, he really comes into his own when the chorus surfaces; the band increase the volume when going for all-out crashy alt-rock sounds, their output tough but not always melodic…yet always more melodic than their frontman, who wails in the manner of a huge, untrained foghorn. It’s a voice that threatens to kill anything of interest within these six minutes, which is a pity since the rest of the band are heard giving their all. Ben Hewitt carves a huge presence behind the drum kit and Paul Joice’s guitar leads wander between heavy distortion and scratchy almost avant-garde noise (as is the case with his featured solo).

Thankfully, things improve dramatically from then on. The title track kicks off with a superb drum line which bizarrely recalls the heady stomp of seventies glam rock crossed with the groove of Green Day’s ‘Longview’, while a loud and overdriven bass cranks out a great lead riff. For the verses, the guitars take a very low-key approach, occasionally throwing out quiet and clean tinkling noises, before everyone literally explodes into life for the chorus. What ensues is a great slab of bluesy rock, the players firing on all six. At times almost unrecognisable as the same players during the opener, Craig tackles each line with a booming confidence, clearly far better suited to the grubby, bluesy stance, while the main riff is an absolute killer – hard edged, accessible, strangely dancable. …And hearing this tune played with utmost confidence, you can sense that the band knows they’re on to a good thing. ‘Solace’ begins with some pleasing clean toned guitar work and a solid backline. The production, being of a great standard, allows for a great separation between the instruments to be heard. The main musical thrust recalls the work of a long forgotten band from one of those much loved Indie Top Twenty cassettes from the nineties, especially in the way the guitars and bass react to each other, while the vocals bring a downbeat gruffness akin to a Guy Garvey performance. Eventually peaking after about three minutes, the vocal subsides for a brief lead guitar break where, as before, Joice fills the slot with some hard rhythmic work in place of the more obvious vibrato or soaring sounds. Coming together for a last airing of the chorus, the natural and slightly northern tone of the vocal has a dour friendliness; the music, unfussy, well-structured and well played – this number captures the most melodic side to Alpha Shallows with ease. Perhaps it should have been used to open the EP?

Closing number ‘Flatline’ brings a lot of the band’s best traits under one musical umbrella. Taking an unsettling waltzing time signature, discordant guitars add to the unease, while Craig croons and mumbles and a bass throws out deep, heavy sounds. This is creepy, like an old indie band smoothing out the edges of the dystopian unease of Post War Glamour Girls…and then the magic really happens. Figuring the old nineties favourite approach quietLOUDquiet never really goes out of style, the chorus crashes in with real intent, and it’s a wordless behemoth of riffery that begs to be played loudly. That should be enough to win over a few old-school alt-rock heads, but the inclusion of an instrumental break that strongly recalls ‘Come Home’ and a couple of other moments from the Placebo debut, plus a repeated refrain of “you’re going to lose your soul” makes this a sure-fire winner. This is a great example of how things can turn around in a short space of time and how some bands shouldn’t necessarily be judged upon first impressions.

From distinctly wobbly beginnings and a tune where Alpha Shallows could easily be accused of just trying that bit too hard, ‘Set The Fires’ eventually settles into a musical space that pulls the best from jangly guitar music’s past. The results aren’t perfect, of course, but with this release, the band marks their arrival as a recording unit with at least three songs that show a great promise.