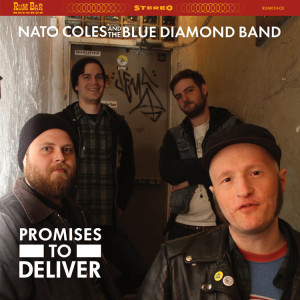 Imagine what a band might sound like if the new wave edge of Tommy Tutone collided with The Gaslight Anthem’s American rock… That would surely be cool, wouldn’t it? If that kind of rock ‘n’ roll floats your boat, then you need look no further than the 2013 release by Nato Coles & The Blue Diamond Band. On ‘Promises To Deliver’, Nato and company really bring the party. It doesn’t matter whether their listeners are in the highlands of Scotland, the middle of Greece or in a far flung corner of Australia, the musical sounds are so vibrant and heartfelt, that within a couple of tracks it’s like being transported to Springsteen’s beloved New Jersey or the heartland of blue collar America.

‘See The Lights’ throws their typical musical manifesto straight in your face with no messing around. A heavy drum beat introduces some particularly sharp rhythm guitar work, somewhere between a Springsteen cruncher circa 1978 and ‘Handwritten’ era Gaslight Anthem. …And then Nato starts to sing; although his booming style recalls Springsteen and Bob Seger in a bad mood, the whole picture is so sharp, it would seem churlish to sideline these guys as merely just a product of their influences. This opener comes with one of those hooky choruses you might find yourself stuck with on the bus…and the loud guitar breaks, man, they just give the band an extra edge. It’s not just a case of lightning striking once, either, as most of the tracks come with a similar intensity and yet more great hooks. ‘Julie (Hang On a Little Longer) has an intro that somehow manages to resurrect the sounds of Tommy Tutone – a vastly overlooked band – before hammering some clean and crisp chords that crank the excitement. Leading into the first verse, Sam Beer plays a mean guitar lead in a very retro style before Nato bellows his tale of longing. The resultant rocker has a really feel-good nature – the extensive use of staccato chords works well against the ringing leads and a deeper rock ‘n’ roll twang fills the little space which remains. Repetition of the title informs most of the chorus, but this alone proves catchy enough and with everything in and out in under four minutes, you really get the feeling that – like sometime labelmates Watts – these guys know their way around a retro rocker and truly understand that excess doesn’t necessarily impress.

Shoehorning in a slightly more country rock edge, ‘The True Blue Rocker’ occasionally has hints of the Gin Blossoms at their most forthright. A spacious riff topped by a great wandering lead reignites a similar natural flow as ‘Julie’, while a smoother vocal has potential to catch the ear of those less enamoured by the overt Bruce-love. Increased use of harmonies also makes this one of The Blue Diamonds’ more melodic affairs and retains a wholesome American vibe, which still results in a fun listen even though the chorus isn’t quite as great as some of the material. Wheeling out a strummed acoustic at first, ‘Econoline’ appears to show a softer side yet to the band’s craft, but before you can say “Asbury Park”, the pastel shades are kicked out the door by a heavy snare drum, huge jangling chords and a rousing gang vocal. With a huge whoah as backup, Nato begins a tale of being “shit outta luck” with his usual gusto and rugged charm. At the point where it might seem formulaic and you’ve been here before, the acoustics return…and a twin lead guitar straight from the Thin Lizzy school of rock lends things a very unexpected twist. With more gang vocals than you can shake a stick at and a rollocking solo to fade, this tune represents all of Nato’s tricks in one hit.

Kicking off with a strong riff that has more than a hint of The Only Ones alongside other early 80s power pop, ‘You Can Count on Me Tonight’ is yet another chorus heavy, staccato edged rocker, but its familiarity should not detract from the fact that Nato and company perform this stuff so well. In this instance, the chorus might rely just that little too heavily on the one line, but Beer’s guitar leads make up for that throughout. If anything, this pair of tunes make the band’s ethos plainer to hear with their simpler approach: take a little human interest, a rousinging riff, then shake vigorously – give your audience a good time. Unless, the whisky and the memories invite a voyage into self-pity, of course, to which ‘Hard To Hear The Truth’ comes dangerously close. With a rattling country two-step, we’re thrown straight into the eye of the relationship’s storm as the protagonist imploring “…hear me out a minute, don’t wak out the door, I need you more than anyone…”. Right from the get-go with the band settling into an obvious rhythm, this has less of an appeal than most of the album, partly due to its one-paced nature. However, in terms of country rockers. there’s still much to like for fans of the style: Cranberry rolls out a strong rhythm with his snare retaining a very natural style, Nato’s grumbling voice is the perfect fit for the material in hand, but it’s guest musicians Pam Laizure (violin) and Sara Pette (vocals) who really steal the show. Pette’s voice, especially, lifts this from a bog-standard hoedown to being a tune with a sweeter edge. If nothing else, it shows that The Blue Diamond band have more of a range than first appears.

Stepping up the retro rock and delivering the riffs at the kind of pace that recalls ‘Pleased To Meet Me’ era Replacements and the early Gaslight Anthem, ‘Late Night Heroes’ gives drummer Mike Cranberry a better workout while the more raucous style shows off all the hallmarks of a live show belter. After hinting at acoustics a couple of times, ‘Rudes and Cheaps’ does so yet again with a wholly acoustic first verse – perhaps revealing a couple of vocal limitations – before exploding into a punchy rocker. The rhythms are strong, the chorus stronger, but if measured against ‘Julie’ and ‘See The Lights’ it comes across as second division material. Careening lead guitars that revel in the same kind of sloppiness that makes Paul Westerberg’s work so lovable help out a little, but you’ll have already heard Nato performing better by this point. Bringing everything on the original LP to a halt, the title track melds the ongoing Springsteen obsession with an almost crashy Stones-esque bar-room brawl, the kind of tune that would also suit the aforementioned Watts. No surprises here; Nato and Sam’s guitar chops and some bustling rawk fill four minutes admirably…and leave you with just enough energy to hanker after more after they’re done.

Even taking a couple of flaws into account, this is a seriously good record. Like the best album the Gaslight Anthem never made, it comes with a high energy and sense of real attitude, but most of the time the song writing is smart enough for the material to never sound throwaway. While on the surface ‘Promises To Deliver’ might seem somewhat generic, the material is very well played, well produced and full of great hooks – for a good time listen, you couldn’t ask for more regarding the style. Grab it now.