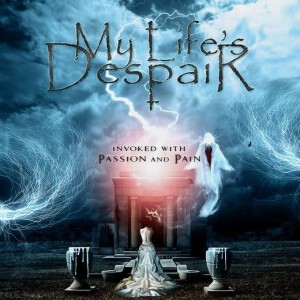 Having roots that stretch back as far 1994, My Life’s Despair is a doom and goth metal band centred around drummer/multi-instrumentalist Larshus. Although he spent a decade working with other underground bands somewhere between hatching his original idea for the project and the time of its actual fruition, it’s easy to hear that a lot of thought went into making things more theatrical than your average doom metal band. ‘Invoked With Passion and Pain’ is My Life’s Despair’s first full length and is a surprisingly enjoyable affair with some of the musical ideas showing a defiant sense of grandiosity that befits the album title.  Provided, that is, you’re happy to overlook the demo quality of the production, the thin drum sounds (possibly programmed) and just concentrate on the actual material.  This is one of those albums whereby it is best not to look at what it is, necessarily, but rather more what the band were aiming for.

Beginning with the sounds of a thunderstorm, a deep gravelly voice and a riff that sounds like Cathedral playing a the Black Sabbath title track, on ‘As Flames Ignite’ MLD wastes absolutely no time in attempting to fool the listener into thinking they’re getting anything but the purest doom. The arrival of the main vocal during that opening number– an uncompromising throat growler – then signifies the presence of a faster riff. Still as heavy, the guitars chug like the heaviest Machine Head dropping into something perfected by Paradise Lost and are a great representation of pure metal riffs. Larshus continues to growl, delivering a dark tale of loss and disappointment – or as much as the audible bits will allow, we can assume this much – his voice counterbalanced by a female operatic presence. The riffs alternate between the mosh-worthy and those with floor-staring opressiveness, whilst the (possibly) programmed drum track throws everything towards the pneumatic. In about five minutes, this has been a reasonable primer of most – if not all – of MLD’s key traits. Concentrating more on a slow, deep riff, ‘A Caress of Stars’ is doom from an even purer source. Keyboards lay a blanket of spooked out drones, but they’re no match for the twin guitar assault, where Larshus, joined by his collegue N.Sanity, crank out slow riffs and occasionally rise to something with more of a flourish, but never manage anything more brisk than sounding like My Dying Bride in a particularly mournful mood. Without compromising too much on the vocals, things have more of a clarity, with a lyric that conjures up various fantasy scenarios – the mention of shadows at dusk being rather evocative. At this point, if doom isn’t your scene, you’ll never be won over and it’s probably time to walk away and choose some lighter listening. ‘Patterns In The Sky’, meanwhile, seems a little safer – it has a great, demonically slow riff contrasted with a clean soaring guitar and a section with some excellently played bass pedals, but none of the quirks of the opening couplet. The brief teases of almost medieval semi-acoustic work seem to be restricted to intro and coda, never reaching their full potential. For dark doomy thrills and a bit of variety, your time would be better spent with a bit of early Opeth (‘My Arms Your Hearse’ is recommended) or perhaps something by Tryptikon.

It’s clearly a bit of a blip as far as safety is concerned, however, since ‘She Said Forever’ is absolutely amazing, cramming pretty much every element of the MLD sound into a hugely entertaining six minute workout. A clean guitar and cinematic piano brings the music very much into the realms of My Dying Bride, while we’re simultaneously dragged though a spoken intro with a snake-like black metal hiss of a voice, made ever more threatening by filters, before being dropped into a tune that’s arguably the album’s most accessible. The growling vocal is counterbalanced by more operatics, something not touched upon since the album’s very beginning; the rhythm section switch between pounding intensity and outright thrashing – both handled with ease and absolute professionalism – while the lead guitars, both downtuned and aggressive, bring more of the kind of soaring sounds associated with late 80s metal, represent some of the album’s finest playing. With a crooning voice, not a million miles away from early Mushroomhead work, ‘No Hope For Tomorrow’ has a distinctly 90s feel. Upon first listen, it seems as if it really doesn’t fit the album, but it’s soon clear that thanks to Mr. Larshus’s ongoing fascination with all things of a broken spirit, it retains the over-arching theme of loss, disappointment and ultimate negativity. The near funereal style is very much present, but the change in vocal added to the relative lack of crunch makes this somewhat of a musical palate cleanser In some ways, as the album’s quasi-ballad, it shows a strong melody, while in others (namely the voice), it still manages to maintain a marginal style. Neither ‘Regrets’ or the brilliantly titled ‘Beyond The Cosmic Laboratory’ add much that’s new to the album’s general mood, but the increased use of spoken vocals during the latter, alongside a well arranged riff contrasted by almost sci-fi soundtrack keys best represents the cinematic qualities of MLD’s heavy approach. Those who enjoyed the opening number will almost certainly love this.

‘Apparitions of the Sky’ employs more ethereal keyboard lines, invoking thoughts of second division gothic horror flicks, while a deep, slow riff and a whole range of vocal stylings plunge everything into full-on doom. At the heaviest end, Larshus sounds like a man clearing his throat played back at half speed, but even this doesn’t detract from the great music – equal parts Cathedral and Type O Negative – before the bulk of the piece quickens pace to scale a galloping metallic style that’s not too far removed from Slayer‘s ‘South of Heaven’. Spoken voices add a theatrical tone and soaring guitar lines bring unexpected melodies, thus bringing contrast with the heaviness. Alongside ‘She Said Forever’, this is the ultimate example of MLD’s musical craft. The attention to every detail – except perhaps the larger recording budget this really deserved – is more than obvious.

Those who dislike growling vocals probably haven’t the time or inclination to check out this release, but should such people happen upon it by chance, they might wish to head straight for ‘Dream Dimension’ a track which, as suggested by the title, is far more accessible all round. This lengthy instrumental never shifts from a slow and pulsing beat, and is chiefly a showcase for some great guitar work. Between them, Larshus and N.Sanity carve out lines that have a timeless quality, with a sound that has a classic feel without becoming steeped in wanton nostalgia. By the time the two-hand taps and twin leads take over, it’s more than impressed. The drum sound is perhaps a little thin, but the circular rhythm guitar parts and pleasing key changes, combined with those leads, makes up for that.

It’s never going to cross to a more mainstream metal audience (ie: those who look for clean singing), but in terms of style, this album presents an hour or so of near maximum doomy/melodic black metal goodness. The production values are a little lacking – possibly even a lot lacking, to be fair, but in terms of arrangements and potential epicness, ‘Invoked With Passion and Pain’ offers much to the listener looking for those heavier soundscapes and some intensive vocal darkness.