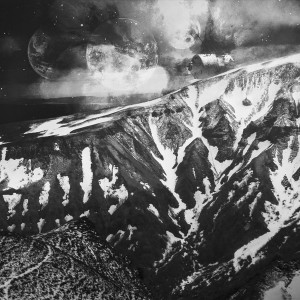 Herscher are practicioners of a rather mean and lo-fi brand of doom metal, the kind that’s so intense that makes your average doom band sound like they’re gearing up to play a few Boney M covers and then bed down for a late night at about 7pm. On the bulk of this third release, this French trio are so frighteningly robust, it’s a genuine challenge to get through the near forty minute playing time in one hit. Depending on how much you love your doom and sludge, of course, this could turn out to a be a very positive thing.

‘Old Lands’ gives the listener more than a fair idea of what to expect for the duration. Slowly cranking a riff that takes partial influence from Black Sabbath’s ‘Wheels of Confusion’, the bass is hugely distorted and churns each chord menacingly. It does so with a frighetning volume, easily compensating for the lack of guitarist in this band. The drums, meanwhile, are not flashy, preferring the heavy snared approach. Between them, these two musicians sound like they’re smashing their way through the slowest and doomiest Crowbar number, while being abetted by a relatively lo-fi production value. A few bars of this and it’s abundantly clear that Herscher are taking no prisoners. Even the addition of a keyboard – often used for effect rather than any discernible melody – doesn’t really lighten the tone. The vocals – an unexpected addition, since this has already showed all the hallmarks of being an instrumental affair – are similarly uncompromising. An incredibly low pitched rumbling voice, comparable at times to Edge of Sanity/Witherscape mouthpiece Dan Swano, this only increases the claustrophobic feel of Herscher’s sound. The riffs crawl past; the throaty roar sounds like a man out for revenge…and then, with no compromise, Herscher do the most obvious thing and fill a couple of minutes with a riff played at half the tempo of the first; a riff so slow it sounds like everything’s on the wrong speed, while the vocal exhales intermittently with a throat-clearing, black metal ugliness. This segues rather smoothly into some expertly played sludge metal which in turn draws out even more black metal growlings. Presenting seven minutes of sludge that could feel like half an hour if approached in the wrong frame of mind, ‘Old Lands’ is positively epic. Thankfully, this is perfectly balanced by the cut and thrust of groove-doom instrumental ‘Bandana’ taking place at the other end of the release – a number where Herscher sound like they’re working out the basis of a Royal Blood demo and adding an Orange Goblin-esque heaviness and flair. Although dominated by bass fuzz and a superb drum performance, the keyboards here make more sense, laying down oppressive, almost darkwave tones. In terms of sounding like strong players, these guys excel on this number, proving they are as adept in an almost jam-like environment as that of the purest doom.

Between these two disparate numbers comes approximately twenty five minutes’ worth of insanely heavy doom grooves. If you made it through ‘Old Lands’, then there’s more that’ll appeal; if not, you’ve got no chance of making it out alive. ‘Skulls River’ introduces drone rock elements to the table, but doesn’t ever shift the focus from the bass, which here throws out slow distorted chords with menace, occasionally allowing some fuzz to cut through. Somewhere underneath the incredible dirge, the cymbals rattle and clatter in a dystopian space rock shimmer, but those looking for an easy way into this tune may never find it. That initial, slow pounding bass eventually reveals itself not as an intro, but the whole piece! In short, this is a frightening seven minutes of musical destruction. Not even the Melvins at their most obtuse would go quite this deep. Luckily, ‘Petron’ employs a much more tuneful fuzz; the bass still comes with a speaker-breaking intent, but a strong riff allows for those all-important key changes to carry a semblance of melody. Like ‘Old Lands’, the slow and doomy approach comes up winning, while the deep neo-gothic voice just adds that little extra darkness. By the middle of this track, Herscher stumble upon a riff so dark and heavy that it probably didn’t really need keyboard distortion laid over the top, but they went there anyway. It results in one of the heaviest listens you might ever hear.

Dragging their preferred skull-pounding approach over the ten minute mark, ‘Apocatastase’ drones a singular chord repeatedly, punctuating with a bass flourish and a kind of melody that hints at ‘And The Circus Leaves Town’ era Kyuss. Having drawn the listener in far enough for them to think this’ll be a great stoner track, they then slow right down. Funeral doom intents, dark gothic vocals and a ride cymbal clanging like a tolling bell bring an atmospheric backdrop, while a distorted bass cranks the same riff over and over…and over and over. Are Herscher attempting to hypnotize their audience with these slow circular grooves? Maybe so, because you’ll get little more for a good while. Just the same, over and over, louder and louder – a simple musical motif that should sustain about a minute an a half, only played for a prolonged duration. Finally, shifting key into another stoner riff, the drums take a dominant role and the vocals chant spookily, while the bass hammers out a slow tune that invites maximum head bobbing. No light and shade here, of course, just varying degrees of eternal darkness. Getting through the whole tune in one hit can be a chore, but it feels oddly rewarding once that task is done. ‘Electric Path’, meanwhile, offers the sounds of a Hammond organ that sounds like it’s been mangled, than placed underneath a death rattle of a riff, so distressingly slow and scary, you might just ask yourselves if Herscher are taking the piss…and especially so once they’ve fused this ultimate doom rocker with the sounds of a man who sounds like he’s being hurt. Screaming voices, no discernable lyrics, just extreme pounding for almost as long as it would take Zeppelin to get through the whole of ‘Stairway To Heaven’… This makes most doom bands sound like lightweight, uncommitted wusses and is not for the faint of heart.

A recording that needs to be heard to be believed, Herscher probably don’t care whether you get them or not; they certainly don’t care much for actual melodies over heaviness. And yet, bizarrely, what they do is possibly quite brilliant. It’s never for the short of patience, but there’s little denying that – in sludge terms – you’d struggle to find a band more intense. These guys mean business.