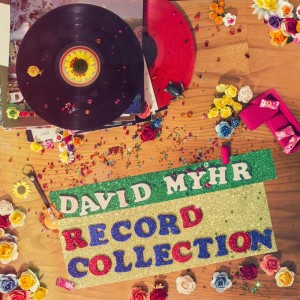 In 2012 singer-songwriter David Myhr (one time of The Merrymakers) released his solo debut ‘Soundshine’. That album was one of the best power pop releases of the decade – possibly even ever – with Myhr celebrating pop’s past, his love of McCartney and myriad 70s pop bands cutting through the core of each track. This follow up EP (issued in early 2014) rounds up a few extra tunes, each one delivered with a broad smile designed for that maximum feel-good factor.

The title cut originally featured on the Japanese edition of ‘Soundshine’. Teaming up with Japanese pop duo Puffy (aka Puffy AmiYumi), Myhr really taps into some superb retro sounds as he retells the tale of the earliest days of a relationship. Name checking classic pop records en route, the whole piece is a celebration of great pop music for Myhr, as he laments the absence of The Beach Boys, of Martha Reeves and timeless classics in his new love’s collection. He’s the pop of yesterday, she’s the hip hop of more modern times – he feels the relationship could never flourish under such a troubling circumstance. Musically, it’s classic Myhr with its hooky qualities and upbeat nature, but its more flippant lyrical approach makes it appear rather more disposable than most of ‘Soundshine’s original cuts..at least at first. It’s maybe a touch less “adult” than we’ve come to expect from the multi-talented Scandinavian, although musically, it still has some strong bones. Retro guitars ring almost relentlessly from the start and Puffy are on hand for a world of backing vocals as a harmony drenched chorus marries a sixties pop happiness alongside the slightly sarchastic punchline. A few plays guarantees this will stick. A second track recorded with Puffy is a step farther away from the norm. With an increased focus on the duo’s input, ‘Boom Boom Beat’ is less adult pop in the McCartney/10cc sense and far closer to a bubblegum track. With Puffy’s vocal input vastly increased, the Japanese duo open the piece with a wall of unaccompanied “yeahs” – returning to flesh out a chorus in a timely fashion – while Myhr steps away from his trusty electric piano and smooth vocal to tackle something tougher. Choppy guitars are rather more in keeping with Matthew Sweet and The Posies than Myhr’s usual fare, but he’s in the driving seat during a bridge section that defiantly tips the hat to The Beatles and British psychedelia. It’s three and a half minutes worth of enjoyable pop-rock on the surface, but if held up for too close scrutiny it doesn’t always show the singer-songwriter’s best side.

With a similar spikiness to ‘Boom Boom Beat’, most of the listeners’ attention will be drawn to some jerky guitar lines throughout ‘You Stole My Heart Away’, a number that’s more than occasionally closer to new wave than power pop. Listen closer, and you’ll discover some Squeeze-like harmonies lurking under its surface – often underused – and a great 80s style tack piano, sounding more in spirit of a Langer/Winstanley production than Myhr’s usual seventies grandness. Naturally, he goes for the jugular when applying a hook – and here the most simple of approaches employing a repetitive “ba ba ba” works fantastically. The end results could be compared to David Myhr covering Justin Kline…and although it’s quite spiky, there’s plenty for his fans to love. Those wanting to experience more of Myhr’s softer side will get consolation via a spot on cover of 10cc’s ‘The Things We Do For Love’, a recording which really showcases his vocal talents and a natural gift for arranging. True to the original recording, this comes with a faultless production and about thirty different multi-tracked layers, each one bringing power pop gold. A bouncy electric piano screams 70s, while Myhr’s lead vocal, meanwhile, is surprisingly sweet. The electric piano provides the perfect foil for his lead, but it’s the wall of backing vocals that are the most impressive. With enough overdubs to make Jellyfish feel inadequate, the multi-tracked voices weave in and out in a glorious retro haze and by the time the track fades, it’s hard not to wonder what magic Myhr could weave on other seventies pop classics: Pilot’s ‘January’ or Sherbet’s ‘Howzat’ are crying out for treatment in a similarly loving and grand fashion.

Last of all, this EP brings the return of something very familiar. Following the release of ‘Soundshine’, Myhr visited the UK and re-recorded a few tracks at the legendary Abbey Road Studios. With the bulk of the session unreleased at the time of ‘Record Collection’s release, Myhr allows an insight into the recordings via an alternate version of ‘Never Mine’. This particular Abbey Road recording had already had a public debut via Real Gone’s 2012 sampler some months previously, but it’s such a full and luscious sounding recording, it’s only fitting it should also have a home on an official David Myhr release. Perhaps more thoughtful than its ‘Soundshine’ counterpart, this recording allows his voice further space to explore; the bass is rich and the lead guitars in the left channel bring a rough yet melodic edge throughout. Backing vocals worthy of ‘Pet Sounds’ era Beach Boys and an echoing guitar solo add extra depth to an already great song. [Watch the video from Abbey Road below.]

Worth seeking out for the title track and the 10cc cover alone, although the lack of physical format is a little disappointing, ‘Record Collection’ is a fun and frivolous listen for anyone who enjoyed ‘Soundshine’, or indeed classic Jellyfish-infused power pop. Give this a place in your own record collection…it’s already guaranteed to include other things that please David Myhr after all.