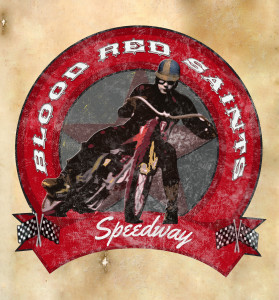 Blood Red Saints come straight out of the starting blocks with a full scale rocker. With no messing, ‘Kickin’ Up Dust’ has a driving approach that’s very much suited to the motorcycles which inspired the band name. In little over three minutes, each of the key aspects of Blood Red Saints is for there for all to hear: Godfrey wraps his voice around some tough but melodic lines – suggesting along the way that “life is a speedway” and “legends never fade”, without irony, but more importantly with none of the silliness of some of his European peers; Naylor’s bass pumps like a huge electric heartbeat and Revill’s grubby guitar tones give the riffs a reasonable crunch. Not to be outdone by a decent vocal performance, he also drops in an amazing guitar solo – the kind inspired by Pete Lesprance on the earliest Harem Scarem albums. The only weak link here is the drum sound; Pete Newdeck plays with the kind of measured approach that all good (and non-Scandinavian) melodic rock needs, but the sound has no oomph – it comes across as almost sounding like a well programmed machine… Still, you can’t have everything. ‘Mercy’ retains a fair amount of the rock from that opener, but the riffs are tempered with some chorus harmonies very much inspired by FM and Def Leppard. This is a good move, since for many listeners it should give the number an instant appeal. Yes, there are a whole world of filters smoothing those harmonies, but to get that classic late 80s sound, it’s a necessary evil and they lift an already good track into the realms of greatness. As before, the real star of the show is Revill, whose playing is first rate – this is a man who can do flashy but also understands the importance of style.

The album’s best track – hands down – ‘Wrapped Up In These Arms’ makes a bigger feature of the keyboards, but even the most retro synths in the world couldn’t stand up to the array of vocals splashed right across everything. Again, Godfrey shows he is a man who can carry a melody – the choppy guitar lines allowing him more space than before – and there’s another top riff, but everything pales in relation to the chorus, a hook so huge it could stand alongside the biggest choruses from the Aviator LP and the FM debut. It’s cheesy, it’s predictable, it’s straight out of 1985 – but it’s unlikely there’s a better AOR chorus to be heard on any other discs released at the tail end of 2015. Elsewhere, ‘Feels a Lot Like Love’ opens with a strong rhythm overlaid by some superb guitar tapping. If there was any doubt previously, this will be enough to convince any nay-sayers that Revill is a solid player. In some ways, this intro feels tacked on, since it doesn’t have too much of a connection with the rest of the track, but that’s hardly a complaint considering the bulk of this tune is huge on melody and even bigger on chorus, often hitting the listener (again) as a cross between early FM and classic Harem Scarem (somewhat unsurprising, given that the material was mastered by Harem Scarem/First Signal man Harry Hess). Rhythmically, it mirrors many an AOR classic, with Newdeck finally upping the ante with his drum sound; Godfrey, meanwhile, is in fine voice, clearly going with the moment and happy enough to deliver several melodic rock cliches during a top performance. The semi-acoustic ‘Unbreakable’ has hints of Trixter and Little Angels alongside the highly anticipated Leppard attack, bringing some great vocal arrangements. The harmonies sound very cool pitched against a hard acoustic rhythm and once a chunky electric riff drops in, there’s also a place for an all-too-brief solo that shifts everything firmly back towards a rock direction. They’re not reinventing anything here at all (of course they’re not), but this is a track that has plenty of the necessary ingredients to keep melodic rock fans coming back, for here, perhaps more than ever, we get to hear a band who clearly aren’t shy of flaunting some obvious influences…but thankfully still manage to sound vibrant when doing so.

No AOR disc is complete without a piano ballad and ‘Faith’ takes the mantle firmly with a simple arrangement that works a solid chord structure, over which the vocal sits somewhere between personal and accessible. The vocals sound as if they’ve been treated slightly (and perhaps unnecessary since Godfrey shows all the signs of being someone who could perform well enough without studio assistance), but it doesn’t detract too much from the overall picture. Those expecting everything to explode into a fist-clenched power ballad with ‘Everything I Do’ type solo and intent around the halfway mark will ultimately feel short-changed, though, as there’s no hint of reaching for that inevitable punch. Instead, the piano is complimented by a blanket of synths, the vocal rises and then…nothing. It’s the only track where you could possibly accuse Blood Red Saints of not consulting their AOR handbook, thus missing an obvious opportunity for a big finish.

With hints of FM and other Frontiers signings Find Me, ‘Best of Me’ and ‘Better Days’ offer two more top-notch slabs of rock. Nothing breaks from the tradition or predictability set by the other tracks (naturally), but on the latter, we’re given another standout due to the heavy use of keyboards and inclusion of a rather punchy pre-chorus. You could probably have half a stab at guessing how these numbers pan out – and most likely you wouldn’t be too far wrong – but it’s fair to suggest that there are hugely popular bands out there with sizable back catalogues and years of experience who would struggle to write anything this good any more. Maybe that kind of half-arsedness comes from having sold a lot of records and no longer having to win over your audience, but it shouldn’t take anything away from the fact that BRS aren’t short on first-rate hooks.

Since so much of the material seems so familiar right from first play, Blood Red Saints could perhaps be accused of working from a few too many tried-and-tested musical blueprints, but then again, that’s also why most of this debut is so good. With twelve tracks and no obvious filler – okay, eleven tracks and an intro – for fans of early Harem Scarem, ‘X’ era Def Leppard and FM, this is a release which will more than push all the right buttons…and then some.