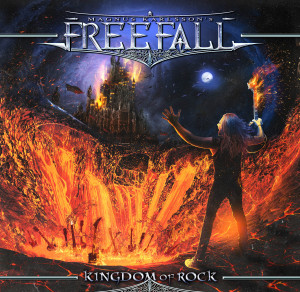 The idea that the magic strikes every so often seemed reason enough, then, for Karlsson to try a second time, especially since the list of vocalists he wanted to work with, in his own words, “just got longer and longer”. That very fact in itself is impressive, since the by this time the Primal Fear guitarist had already worked with Jorn Lande, Russell Allen, Mark Boals, Bob Catley, Bobby Kimball, Jimi Jamison (RIP) and Tony Harnell. …And above all else, the guest list of golden throats that graces 2015’s ‘Kingdom of Rock’ is impressive enough at times to reel in a good few hard rock fans, even if – once again – those end results aren’t always perfect.

Giant European bombast is very much the order of the day as the title cut thunders from the speakers, all pumping bass and bravado, with keyboard patches adding orchestral sounds for maximum power metal effect. But then, what else would you expect from a track featuring Jorn Lande on vocals? “We will rule the kingdom of rock! Turn it up, turn it up! Waaargargh! LAND OF METAL!” he opines, much like a cross between Ronnie James Dio and Brian Blessed. Naturally, he does so with gigantic self-belief, the only kind that such a silly performance requires. For the potentially embarrassing factors that face us at the beginning of this musical journey, there’s also stuff to like on this particular number: handling all instrumentation bar the drums (courtesy of Jaime Salazar on all tracks), Karlsson proves – once more – he has a very broad talent. His hard rhythm guitars have great melodic metal tones, his leads straddle the perfect balance between feel and flash and eventually even those bombastic keyboards seem like a wise enough choice. For those who enjoy Lande’s solo works and bands like Ring Of Fire, this should tick the right boxes as a piece of huge metal, as should ‘Angel of The Night’, a track which includes a guest performance by Pink Cream 69‘s David Readman. A man perfectly suited for the job in hand, his being in fine voice helps carry this number off with aplomb, but in terms of European melodic metal fare, to be fair, it’s also very well constructed. More sophisticated than the opener, it allows for a touch more melody, even if the over riding theme is that of bombast. The intro is superb, with galloping rhythms and twin leads so obviously tipping the hat to Iron Maiden’s forever enduring influence on metal – a musical theme reused in bridge sections to equally pleasing effect. The verse, meanwhile, grumbles with intent, Readman’s big voice complimenting lower key chops and horsey noises from Karlsson’s omnipresent guitar, but it’s the arrival of a big chorus allows Readman a real opportunity enough to display his talents. Equal parts melody and grandiosity, it’s a track Pink Cream 69 fans will adore, while those who enjoy old fashioned metal in a much broader sense will also find a great affinity within this classic arrangement.

Listeners hoping for something more in the AOR field also get their wish. ‘No Control’, a mid paced puncher featuring the legendary Joe Lynn Turner, is so fantastic that the rest of ‘Kingdom of Rock’ could be utter bilge and it still wouldn’t be the worst rock disc released in 2015. Ever the consummate pro, JLT is in great voice, booming yet always melodic, but it’s the combination of that voice – almost as good as it was almost a quarter of a century earlier – and a totally sympathetic arrangement, giving that one-two punch, that makes this track essential listening. The bulk of the music recalls classic Survivor delivered with a slightly bigger crunch; the lead guitars wouldn’t have existed without the twin lead groundwork perfected by Thin Lizzy and the chorus is huge – echoes of Tall Stories and Takara – ensuring this is a superb listen; gold stars all round, here. Keeping the AOR-ish edges in places, ‘Never Look Away’ includes some very pleasing key changes, a very assured pre-chorus arrangement and a huge shift into an equally sizable chorus, where Tony Harnell – helium balloon abuser and sometime TNT frontman – uses such an opportunity to belt at the top of his lungs. The tough riff makes for more decent listen and Karlsson’s solo is fantastic, but naturally it pales in comparison to the JLT offering. There’s every chance that Harnell’s ever-loyal fans will find this one of the album’s most essential listens, of course.

Always a welcome addition to many a melodic rock bonanza, Harry Hess lends his considerable talents to ‘A Heart So Cold’, an odd hybrid of a track that manages to meld a Judas Priest riff (circa ‘Turbo’/’Ram It Down’ with a Harem Scarem chorus. Those Scarem comparisons were almost inevitable, of course, with Hess topping a multi-tracked vocal arrangement. All this, combined with an even bigger solo, as Karlsson sweeps from majestic string bending to faultless twin lead sounds, proves why an all-star affair such as this will never be a complete waste of time, even if the output is hit and miss. Elsewhere, a weighty power ballad ‘The Right Moment’ (sung brilliantly by the largely unknown Rebecca De La Motte) comes across like a collaboration between Robin Beck and Evanescence. At first it feels as if this is going to be largely uninteresting, but a combination of melody and great voice wins out just enough to make it one of ‘Kingdom’s better tracks, even if in some ways the overall approach seems somewhat by numbers.

The rest of the disc doesn’t ever reach the heights of these tracks, however, with ‘I Am Coming For You’ (featuring Karlsson in a lead vocal role), showing off some reasonable melodies of a Mark Boals meets Geoff Tate variety but without ever reaching full potential; Tony Martin‘s ‘When The Sky Falls’ is yet another meat and potatoes stomper that feels like his thousandth attempt to recapture the sounds of Black Sabbath’s ‘Headless Cross’, and while ‘Out of The Darkness’ benefits from some strong leads and a more melodic chorus than the Lande affair, those who came hoping for some solid melodic rock might feel left aside. With the guitars hammering in a manner bombastic enough to rival Primal Fear’s output, this gallopingly fast Euro metal affair featuring Jakob Samuel (from The Poodles) is a touch wearing. To be fair, though, everyone here sounds as if they’re having a great time…even if their listeners may not all see the appeal.

Much like the first Free Fall project, fewer Euro-metal workouts and more classic melodic rock arrangements would certainly have been very much welcomed, especially as Karlsson demonstrates a definite talent for those. Even so, ‘Kingdom of Rock’ has its moments, and the best tracks should appeal to those not so much into the heavier side of things. So often interesting rather than classic, this disc is certainly worth checking out for Joe Lynn Turner, Tony Harnell and Harry Hess…but only if the price is right.