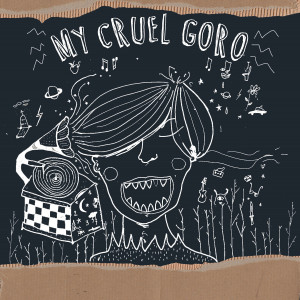 A multi-national trio of joyous noisemaking intents, the oddly named My Cruel Goro bring loud guitars and a boundless energy that’s potentially appealing to those who found themselves glued to the pages of Britain’s NME music rag back in the mid 90s. Perhaps not the guys who fervently followed the Blur vs Oasis spats, or those who patiently awaited news of the next Echobelly tour or were just casually looking to see if editorial policy meant that Morrissey was out of favour that week; more those readers and listeners who looked forward to new releases from Superchunk and were keenly following the progress of Ash’s recording career. Indeed, for those who still get a kick out of Ash’s noisier material – ‘Darkside Lightside’ etc – the three songs which make up this release should bring both a nostalgic charm and a sense of relief that a musical influence that’s some twenty years gone at the time of this release could still sound so vibrant.

‘Clash’ wastes no time in aiming for the head via a distorted guitar riff, its overdriven and fuzzed up sound totally begging for the volume knob to be cranked. Below the layers of heavy rhythm guitar, there are other important elements adding to the noise – a new-wavish keyboard noise and plenty of fuzz bass – but generally speaking, it’s all about that guitar, with MCG very much favouring the thrashing indie punk sounds as preached by Ash, the all too overlooked These Animal Men and S*M*A*S*H. The vocals, by contrast, are surprisingly melodic – at least at the points where they’re at least audible – yet still sympathetic to the overall sound. The whole musical picture is sharp; when the voice isn’t steering the riff, the band thrills with a distorted bass solo and in approximately two and a half minutes, really shows their mettle in as lean a fashion as possible. Beyond the distortion, there’s no padding here, the effect much like hearing an early Supergrass single played back through broken speakers. Allowing more space within the arrangement, ‘Crapford’ is even better, first showing Andrea Marcellini (bass) and Tomasso Adanti to be a strong rhythm section, before striking the perfect balance between energetic thrashing and user-friendly alt-rock sounds. Listeners should (again) hear unavoidable influence from the early Ash recordings, but also a little of the more lo-fi elements from the Ben Deily led Lemonheads of the late eighties. Factor in a shrill guitar – on course for a careening solo – and it ticks all the right boxes for fans of the style. Even if the lyrics don’t make an overall impression, the tune of the chorus may just hit the spot.

The most adventurous of the EPs songs ‘Glue Buzz’ marks a slight change in style. Punctuating the by now familiar fuzz guitars with a sharper riff, this allows the bass drum to cut through, while stops between the verses add a very welcome sense of the quirky. The verses are bouncy and infectious, loaded with the kind of attitude that conjures up images of pogoing in a small sweaty club; then just as MCG have you reeled in, they decide to embark on a four minute journey into a mid paced wall of sound that nods to early Lush and Sonic Youth. Keeping a keen ear to things occurring below the more confrontational parts, the sound of a tight unit can still be heard. The drums drop in some great, busy flourishes and the interplay with a grumbling bass and Andrea Maraschi’s shredding guitar makes it a fairly intense experience all round.

These three tracks mightn’t always score top marks for either originality or variety, but for retro spirit and sheer energy, My Cruel Goro come up fighting. Much like Leeds based Pavement wannabes Take Turns, US slackers HeyRocco (regurgitating bits of Nirvana, Smashing Pumpkins and Dinosaur Jr. with a shameless glee) and (best of all) Jennie Vee‘s full on love letter to Lush, this EP represents some of the more enduring and authentic homages to the world of 90s alt-rock. A fun listen, indeed.