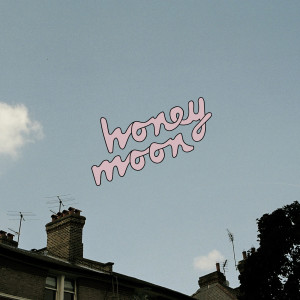 In terms of retro sounds, things rarely come any more assured and gorgeous than those of London based Honey Moon. On their debut EP, it’s as if the quartet have been sucked through a time tunnel back to 1967, to a time when fashion boutiques like Granny Takes a Trip were all the rage for the wealthy and hip in-crowd, a time when experimental music was still in its infancy, but more importantly, a time when music was becoming rather sophisticated. From there, they’ve learnt a great musical craft, transported it back to the present and layered it with a modern sheen and a few filters. The EP’s four tunes jangle with a lazy, blissed-out sense of cool; each of the players bringing something special to this short musical throwback.

Lead track ‘Ellie’ works a very pleasant riff over which the vocal moves from sounding very natural and during a tuneful verse to retro high tenor on a melodic chorus. Pleasant, in this case, is neither meant as understatement or back-handed compliment, for pleasant is exactly what it is – a throwback to decades gone by through post-modern eyes. Hearing this for the first time is to hear something quintessentially British, as if Norman Blake of Teenage Fanclub fame had retooled a Colin Blunstone performance in his own image. In short, this is superb alt-pop. It doesn’t stop there, either, since the woozy ‘Tripping (On The Thought of You’) follows suit in an equally classy fashion. The guitars ring with a sixties trill, while the measured work of the rhythm section dictates a satisfying mid-pace throughout. Although the tune is lovely, the vocals are on hand to leave the most indelible mark and some well arranged harmonies carry everything with a hazy confidence.

Tapping into an ever more vertiginous soundscape, ‘Waiting’ – the best of these four numbers – employs a few effects in the guitar department, occasionally giving everything an other worldly quality a la Cocteau Twins, but never loses sight of its unashamed melodicism. As the verse drifts and then changes key for a chorus that not only lends the release its most memorable asset, but unexpectedly sounds like very early Silver Seas (circa ‘Starry Gazey Pie’), there’s no doubt these guys not just talented, but something quite special. Frontman Jack Slater-Chandler’s voice is wistful, the music familiar yet somehow almost other-worldly. If you have a passing fancy for gentle dreampop or a thoughtful jangle, you need to hear this. ‘I Saw You In a Dream’ blends a slightly distorted guitar with a heavily phased voice, hammering home the quasi-psych elements of the band’s core sound, ambling gently until a pumping bass picks up the pace with an almost percussive style; the drums, quiet and unassuming, shuffle along always allowing the voice to carry the bulk of the melody. Again, despite the nineties dreampop slant, the moodiness and breathy qualities call to mind a Blunstone performance, perhaps as if the likes of Rain Parade gave a nod to his post-Zombies cult LP ‘One Year’. As this particular number reaches the inevitable climax, drummer Sam Roux steps from the shadows with a considered performance, holding the beat, thus allowing guitarist Zach Urich and bass man Peter Anderson a greater opportunity to increase their volume. All in relation to musical vision, of course: while becoming louder, they never lose that dreaminess that sets them apart from being just another guitar-based indie-pop outfit.

In an ideal world where the Cocteau Twins were less wilfully arty, Belle & Sebastian were neither drippy or just plain irksome, or Teenage Fanclub had loved the Zombies as much as The Byrds, they might sound a little like Honey Moon. The music runs deeper than mere homage to the sixties-through-nineties retroscope of course, and with a twist of their own style, this EP marks the start of what might be a wondrous journey for both band and keen listener.