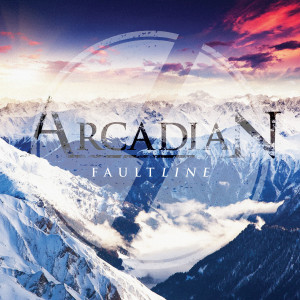 From Christchurch, New Zealand, Arcadian are a six piece alternative metal band with some really serious chops.  On their 2015 EP ‘Fault Line’ they bring six tunes that are guaranteed to impress anyone who loves their metal with an alternative slant that’s heavily downtuned with aggressive vocals, but most importantly of all, brings a frightening array of sledgehammer riffs.

With a keyboard drone, there’s an ominous air at the beginning of ‘Separate Paths’, with Arcadian leading us towards darkness with their deep ambient sound.  Having pulled us in, there’s an almighty crunch as the guitars begin a heavy onslaught – and it’s a great sound, with a hugely dropped tuning, the twin guitars tackle an oppressive djenty riff.  With that, those fond of this kind of sound will know they’re set for a pretty amazing twenty five minutes.  Moving into the verse, the dual vocals move between a melodic death growl and hardcore shoutiness, and as such, may be hard going for some, but there’s a superb amount of oomph in the delivery, as such a tune requires.  The bass is heavier still, while a twin guitar onslaught brings the best djenting sound this side of the mighty Chimp Spanner.  In many ways, the aggression and power are more important to this opener than any chorus or hook, with Arcadian looking to grab your attention as quickly as possible.  …In that respect, it’s a huge success.  Subsequent listens allow a couple of the subtler elements to take hold – like the near constant higher register guitar work that fills so much space – the fretboard work and tapping sounds are particularly impressive.  Vocally, too, the interplay between the two voices is integral to the overall picture, but it’s the heavy riff that’s king.  With that, Arcadian bring much more of the same during ‘Lower’ and ‘Running Scared’ – which, obviously, isn’t a bad thing. With the former tapping into an increased use of staccato riffing, sometimes sounding like they’ve welded the uncompromising thrashiness of We Came As Romans with a mangled interpretation of a Linkin Park chorus, it really shows the potential in their chosen sound, while the latter – a shorter piece – redresses the balance by focusing far more on djent themes.  The guitar sound is just terrific throughout and the force can really be felt with the heavier and louder notes breaking into a distorted boom on occasion.

On the title cut, a more commercial chorus brings a more obvious melody via a clean and slightly filtered vocal. The mood somewhat (again) like a much heavier version of early Linkin Park, but it’s not long before the growling takes over – in this case dropping some seriously confrontational hooks – and pretty soon, an array of voices engage in a battle of wills below a wall of sound.  Throughout the second half of the track, there are some fantastic touches – the reintroduction of the clean vocal over a faster riff is essential, but the older sounding, clean soaring guitar work provides a superb counterpoint to the deep and sludgy riffing, which all the while has never really sought any kind of compromise.  For an entry point into Arcadian’s musical world, this track certainly stands out – it has just enough of everything to please.   Stoking up some particularly aggressive muted chords, ‘Something For Nothing’ often hints at the heaviest works of Trivium taken to their most logical extreme.  The melodic death metal growls are impressive and perfectly pitched against riffs that shift between a classic thrashy sound and unapologetic djenting, while there’s room enough for another more melodic chorus.   As before, Arcadian show great musical prowess throughout, but it’s when reaching a climax that the various classic metal elements come together with real force…and those who still enjoy the pace of classic thrash, overlaid with complex lead work will find much to love here.

The music on this EP isn’t just meticulously constructed, it also has one of the best production jobs you’ll hear on an independent release.  It’s huge wall of sound might hurt if listened to on the earbuds, but listened to properly – ie: on a set of huge speakers with decent wattage – these tracks absolutely slay.  Throughout, it’s possible to hear each of the musical layers with clarity – and there’s so much going on.  ‘Fault Line’ is not likely to win over anyone who remains unconvinced by the alt-metal/djent subgenres, but there’s no denying that Arcadian are among the best in their field.    In all, this a highly recommended listen…and you can download it FOR FREE via the link below.