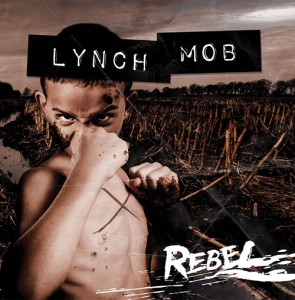 With ex-Dokken bandmate Jeff Pilson on bass and Brian Tichy (ex-Pride & Glory, Whitesnake) handling drum duties this time out, this line-up of Lynch Mob comes with a really tough rhythm section and the power in the band is more than obvious from the minute the band play their first notes.  With Oni Logan retained in the vocal department, there’s another link with Lynch Mob’s formative years, but naturally, 2015’s ‘Rebel’ has far more in common with ‘Sun Red Sun’ than ‘Wicked Sensation’.   The darker sound of their 2014 release is present almost throughout, but the energy in those songs is often lost in favour of mid-paced grooves.

Chosen as lead single, ‘Automatic Fix’ kicks in with a drum roll from Tichy and then gets stuck into a circular riff which sounds great at first, but has its obviousl limitations.  It has a sound with which Logan occasionally sounds at odds – at least to begin with – but the track gets moving, it’s not entirely without merit. The chorus is a reasonable one, provided you can cope with the cheesy factor (any hook that mentions rock ‘n’ roll is likely to have that “marmite effect”) and, naturally, George Lynch’s lead work is more than commendable.  The main sticking point here is the length – at six minutes, it outstays its welcome by at least three minutes and one chorus, especially as you’ve heard all it has to offer within about a minute and a half.  Slower and a touch heavier, ‘Testify’ lumbers with a huge riff – Lynch and Pilson clearly having a great time cranking things up. Pilson’s bass is in the centre, high in the mix and as such provides the tune’s best feature.  Beyond the slow groove, there’s nothing going on, but even so, Logan seems in good voice. Those who like a plodder akin to the slower elements of Tony Martin era Black Sabbath or Lynch Mob’s own ‘REvolution’ might get a kick out of listening to this, but for everyone else, the skip button won’t be far away.  Bizarrely, this is the album’s other single.  Seriously, what are Frontiers thinking?  Those single choices represent ‘Rebel’s dullest tunes.  …And, man, they’re dull with a capital D.

In a similar mood, bringing plenty of bottom end, but managing to stay buoyant, ‘Between The Truth and a Lie’ brings more of the same on the surface, its general feel hovering somewhere between ‘Dysfunctional’ era Dokken and the more groove-laden elements of ‘REvolution’.  The riff is an absolute monster – lacking in clean tone, maximum crunch – but it’s the contrast with the chorus, a little lighter with reasonable harmonies, makes it classic Lynch Mob and a huge step up.   A few plays allows that chorus to sink in…and once it does, this is a number that pushes all the right buttons.  In all honesty, this would make a far better single than ‘Automatic Fix’ or ‘Tetse Fly’ ‘Testify’…

Easily the stand out, ‘Pine Tree Avenue’ is very groove based, settling on a sound that’s not too far removed from the mid-90s work by Stevie Salas Colorcode.  Since Colorcode often featured Tichy in a key role, it’s possible that any similarities aren’t entirely coincidental.  His hard and heavy approach behind the kit is essential in providing the main groove here, with Lynch stepping up with a a natural and dirty tone.  The way this tune moves along is classic, with a natural swing; Logan is clearly relishing the space to deliver a great vocal, while Lynch is saving himself for the inevitable solo spot – and his solo is absolutely killer.  Taking a similar blueprint but stoking up the blues-rock elements, ‘Jelly Roll’ features another great vocal – this time bolstered by some great harmonies – and includes another great solo.  Not a million miles away from some of the material from Europe’s ‘Bag of Bones’ release from 2012 and should appeal to listeners who love stuff with an old school charm.  In truth, ‘Rebel’ is worth the price of admission for this and ‘Between The Truth and a Lie’ alone.

Elsewhere, ‘The Ledge’ brings provides welcome respite from the heavier riffs, but is in no way any lighter in tone. With it’s mix of clean toned guitars and low-key moodiness, it’s a slightly unsettling affair and, more than ever, Lynch and Pilson’s history with Dokken shines through – for this is a number that could easily fit among the ‘Dysfunctional’ material.  Slow and bluesy is the key, but there’s a spooky post-grunge air, as if Jerry Cantrell has influenced the overall tone.  Another offering that recalls mid-90s Dokken, ‘War’ thunders along courtesy of Tichy’s heavy no-nonsense approach, while dirty riffs provide a reasonable amount of crunch.  Easily one of the album’s pacier numbers, this allows Logan an opportunity to wail from the bottom of his lungs – and faced with plenty of long and belting notes, he makes easy work of the material.  In most other bands, such a performance would own this tune but Mr. Lynch has other ideas…  Honestly, the featured solo during this number is amazing – busy, complex, lots of frantic string bending in classic fashion, but often with a keen ear on melody, it’s almost as if Georgey-boy has looked back at his Dokken performances from thirty years previously and decided that’s what’s needed to finish this record.  He’s right, too – a couple more rockers in this fashion and ‘Rebel’ could have been one of the best Lynch Mob discs to date.  Never up their with Dokken at their best, of course, but those days are long gone.

This album presents (almost) wall to wall riffage – heavy enough to clear the cobwebs, yet just about melodic enough throughout to retain an old-school rock vibe. There are three or four instant classics for those who enjoyed ‘Sun Red Sun’, which should be enough to warrant a purchase.  A few faster songs certainly wouldn’t have been unwelcomed – maybe even a little of the fist-clenched power of Sweet & Lynch – but with a few strong choruses featured and George on hand for a handful of nifty solos (the one in ‘War’ is positively staggering), ‘Rebel’ does most of what you’d want from a Lynch Mob album by 2015.  Don’t let those singles put you off…