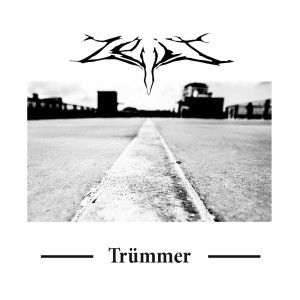 Formed in 2010, German metal duo Zeit set about expanding the boundaries of black metal with a distinctly DIY approach.  Following the release of their first EP, they expanded to a trio with the addition of a bass player – something pretty much essential in adding weight to their ferocious noise.  Their third EP, 2015’s ‘Trümmer’, brings five intense slabs of noise, not so much in the traditionalist black metal vein as much as an unholy hybrid of black metal, doom and grindcore. Naturally, that description has already piqued the interest of a few while simultaneously frightening the living scheiße out of the rest of you.

They’re not about to break the listener in gently, either. The title track winds the tension very tightly indeed, churning out slow, heavy riffage via a simple chord progression.  Following a slow fade in of distortion, the sound shifts into that of a metallic force, deep echoing, slow and brutal.  Throughout seven minutes, the intention never wavers, showcasing the slow and methodic interplay between lead guitarist Fur and drummer Win throughout its lengthy lurch.  For some, however, the show will be over from the minute Fur adds his vocal.  Not so much a black metal rasp (as per the rather brilliant Bast) nor a traditionalist death metal growl (as per the thoughtful Voice of the Soul, one of the best exponents of their chosen style you’re likely to hear), but instead, something far more threatening. Upon deciding that neither of those aforementioned very-extreme-yet-remaining-palatable approaches is nearly good enough for such a musical backdrop, he adopts a throat tearing, guttural rasp that sounds rather like a piece of industrial machinery that’s gone on the splutter.  Atop of an oppressive grind, he splurts out a noise that’s just so confrontational it’ll turn off all but the most committed.  …And, it’s in German, but not that you’d tell, of course.   By the time the track has gasped its last death rattle and collapsed into a wall of distortion – almost in the same manner which it arrived – Zeit prepare to confront their listeners once more.

If you were expecting them to follow with more of the same, then of course you’d partly be right, but for the most part ‘Splitter’ is superior at almost every turn. Eschewing the doom core for a classic death/thrash base, the three men are on fire as they blister through various bars of metal that sound like early Death with Motorhead’s Philthy sitting in on drums.  Here, Win shows off his skills behind the kit – and with various bass pedals and an intent to absolutely trash his snares his playing is an absolute frenzy.  This rhythmic attack is brilliant enough – especially when combined with some classic speed/thrash guitars – to distract from the vocal, but even that too sounds better when pitched against something with a lightning speed.  They don’t manage all six minutes at full pelt, and there’s room enough for a doom groove to fill time in the middle while the listeners pause for reflection.   Taking these skills and applying them to the truncated ‘Stillstand’, things work out fine – especially if you like extreme metal.  Fur’s choice of slower riff has a classic almost Sabbathy air and still sounds pretty masterful despite the drummer’s attempts at drowning out everything with a raw live sound.  That riff is good enough to forgive any vocal flaws, which by now are something more of a demonic black metal standard, even though it’s hard to determine whether there are actual lyrics…in German or otherwise.  A couple of brief interludes show an expansion of Zeit’s talents – an unexpected slightly grungy tone creeps in here and there, while the coda goes for full on pneumatic grindcore ugliness in a truly oppressive and forceful manner.

With a strong rolling guitar riff, ‘Groll’ begins in a surprisingly melodic fashion, sounding not unlike Iron Maiden’s classic ‘Transyvania’ (albeit played at double time). Even once the pneumatic drums take hold, its far more accessible than anything in the Zeit canon prior to this point.  Fur brings in a more traditional black metal rasp and for three solid minutes, the trio absolutely blister in an exteme metal scenario.  The quasi-melodic riff goes some way to making this the EPs best number, but more than that, this is the sound of a impeccably tight musical unit; the sound of three guys absolutely playing their hearts out and coming up with an absolutely winning formula.  Taking another cue from the more classic, the intro from ‘Moment der Klerheit’ adopts a circular riff that’s a throwback to late eighties and various death metal pioneers – and wisely between the deep husks of voice (perhaps telling us stuff of supreme importance) – it reappears throughout.  With more of a death/extreme thrash backdrop, it’s only the vocal that pins Zeit within the black metal sphere during this track.  In terms of crossing the boundaries into other territories of extreme metal, this is job expertly executed.  This last pairing seems so much more focused than the earlier tracks and as such brings the EP to an incredible finish.

With ‘Trümmer’, Zeit bring what is perhaps the biggest aural assault since Abaddon Incarnate dropped ‘Pessimist’ the previous summer.  Hard, fast, and raw…It’s pretty fucking brutal, but frankly, that’s why some of you will absolutely love it.