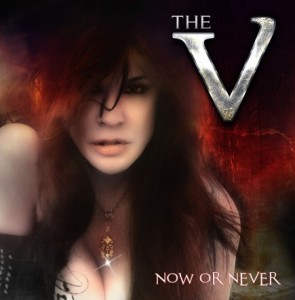 A strong indication of where the bulk of the album’s heart lies can be heard from the outset, with lead single ‘Again’ (penned by Stryper man Michael Sweet) beginning with an Iron Maiden-esque riff of some weight, before the band crash into a meaty, mid-paced rocker.  The opening guitar salvo appears intermittently throughout, but it’s the Dio-style stomp that wins out.  Freeman, meanwhile, powers through each line with gusto. Her voice has grit, but unlike those Benedictum records, thankfully, she’s almost fully reined in any growling elements allowing most of the belt in her voice to carry the tune.  A slightly stronger offering, ‘Now or Never’ at first sounds as if it’s going to happily recycle an old NWOBHM riff, but quickly drops into something a little funkier.   There’s nothing new to be heard here in the realms of old-school melodic metal, but it presents itself well enough.  Those who like the aforementioned Pesch, early Dokken or perhaps even the more mid-paced Accept tunes should find something to enjoy within this tough opening duo.

Bringing more sharp edged rock, ‘Love Should Be To Blame’ showcases V’s big voice on a Dokken-esque workout, perhaps less distinctive but a touch more melodic than the opening tracks, while ‘Kiss My Lips’ brings a big punch but, sadly, little flair.  What this lacks in complexity, it makes up for with ballsiness: bolstered by Leather Leone on husky backing vocals, the repeated chorus line is so dumb, it has a fair chance of sticking in your head whether you’d want it to or not.  These tunes represent the more basic elements of The V’s style – if you hanker for the hard rock of 1984, it’s okay, but for the more discerning melodic rock fan, there’s not much to get too excited about. Working around a meaty riff and pumping bassline, ‘Roller Coaster’ brings fist clenched rock in a kind of NWOBHM-glam hybrid.  While Freeman’s voice is at its strongest here – her metallic approach streets ahead of the overblown embarrassments that filled the previous Benedictum disc – it’s the the guitars win out with a equal blend of hard chug and melodic string bending.  The chorus, once again, is pure cheese – but if you can find yourselves in the zone and accept it at face value, it’s fun.

Faster than most of its peers within this collection, ‘Ready To Run’ is a belter of classic 80s metal standards. The end result sounds a cross between Saxon’s ‘Motorcycle Man’ and Dio’s ‘Stand Up & Shout’, and none the worse for that. The rhythm section thunder, the lead guitars squeal, and V sounds like the consummate professional throughout.  Also from the musical timewarp, the slow and brooding ‘King For a Day’ strikes the perfect balance between Dokken-esque sludgeriff (circa ‘Dysfunctional’) and strong vocal performance.  Freeman drops her voice accordingly sounding dark and menacing, rising for a chorus thus adding a necessary element of melody, while on the verses, Tony ‘The Cat’ Martin brings another rousing vocal.  Factor in a tasteful, yet rather busy lead guitar break and its becomes another celebration of the old-school that shows a bunch of musicians who clearly love what they do.  While the retro feel is likely to turn off listeners not wanting a journey through 80s metal, there’s little doubt that the end results aren’t reasonably striking for what they represent.

Those those not keen on old fashioned, stodgy metal riffs are advised not to throw in the towel, though, since it’s a couple of numbers nestled somewhere near the end of the disc that makes ‘Freedom’ really worth checking out. ‘Starshine’ brings something wholly unexpected to a Freeman-led project: a tune of purest melodic rock.  With clean guitars strumming and a killer AOR chorus, this hints at great tunes from the early 90s – Tall Stories, various things from the Now & Then stable – and as such is almost guaranteed to please many fans of the style.  There are a few filtered backing vocals adding an extra pop sheen, but these never detract from the overall enjoyment of the piece.  Tapping in to a clean and confident vocal, we hear V in a manner those Benedictum records would never allow, her voice – although gritty – has a passion and melody that helps this number really stand.  Almost equally enjoyable, ‘Below Zero’ brings some great lead guitar work alongside a choppy riff that pulls from a classic melodic rock inspiration. Over this solid backing, Freeman’s voice soars, often melodic although retaining a slightly metallic edge.  From strong beginnings, things really hit once the chorus appears, bringing with it a great sense of harmony.  Between the vocal hooks, twin guitars beaver in a way that appears (again) reminiscent of early 90s AOR, resulting in a number that’s well worth checking out.

While AOR devotees will not find much to like here beyond those two very melodic tracks, fans of a more obviously “classic metal” style will find a handful of enjoyable tunes. With appearances throughout from a cast of familiar faces – Dokken’s Jeff Pilsner, Stryper’s Michael Sweet and Symphony X man Michael Lepond bringing some sterling help alongside a couple of V’s own Benedictum chums – this is a record that turned out far better than expected. Sure, it’s not all gold and it’s about a factor seven on the old cheese-ometer, but you’ll have heard much worse – and often from those involved.