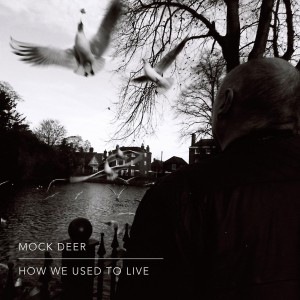 Mock Deer is a London based duo specialising in stripped down, DIY alt-folk sounds. Their second release, 2015’s ‘How We Used To Live’, recorded with members of Dead Flowers, is a sometimes low-key and often thoughtful affair. Its four songs almost place the listener in the middle of Mock Deer’s studio space, the recordings bring a natural live sound; it almost feels as if it’s allowing us access on private time as the musician spins timeless yarns with a smart, no frills musical backdrop.

Very much a release of two distinct moods, the rousing ‘Pork Chop Suits’ shows of the more aggressive side of Mock Deer. Leaning heavily towards a blues-folk stomp at first, there’s a heavy beat augmented by a few handclaps, multiple twanging guitars and a classic driving riff. Atop the groove, the voice sounds slightly reverbed as frontman Ricky Damiani hammers his way through each line with gusto. This is great, but it’s the middle of this number where the sparkles of Mock Deer’s real charm start to come through. Losing the beat, stoking up the ambling guitars, there’s a Daniel Lanois-eque haunting melody, over which the vocal shifts with an almost equal spookiness. ‘Gypsy Boys’ works around a finger-picked melody and some hard acoustic strings; although the musical melody is busy, it never detracts from the voice, which cries with an extreme confidence. Bringing in the drums, the number shifts into gear and incorporates the kind of jigginess present in so much twenty-first century alt-folk, with the rhythms rattling and guitars busying with finger-picked abandon. Although some may draw parallels with the million-selling Mumford & Sons – largely due to its rollocking old school jauntiness, the lack of sheen here sets Mock Deer apart, this is an act that never favours commercial appeal over a traditional feel. Luckily, it’s lacking in banjo too, so it’s never too wearing.

Those songs are enjoyable, but it’s the softer material here that really impresses. In a more low key mood – and one with a much stronger appeal for those who like the more thoughtful singer-songwriter stance. During the title cut, the space between the instruments is immediately striking – the intermittent bass jostling against occasional keys while a shuffling drum holds things together creates a rather sparse mood, but everything hangs on the voice. …And what a voice it is: taking a far more naturalistic approach, Damiani brings voice down a few notches to lend the performance a more personal air and in doing so, the performer is instantly more approachable, especially taking his complex acoustic guitar lines into consideration. On the louder notes, his voice shows real passion; his twangy tenor voice slightly reminiscent of Kristian Bush in his old Billy Pilgrim days. In all, a superb number. The quietly haunting ‘A Hidden Stone’, meanwhile, strips the guitars back to their barest essence, allowing the sound of fingers scraping against strings to add character during the opening verse. Introducing the rest of the band, the bass is at once warm and inviting, while occasional slide guitars and a simple drum bring out the best in the live in the studio set up. As good as the music is, it’s almost impossible to lose sight of this being the Ricky Damiani show and against that rather fine acoustic melody, his trembling voice often suggests a sadness in the tale told; his delivery always timeless with its rootsy timbre.

Although predominantly of interest to those with an interest in acoustic and folk music that isn’t too shiny, ‘How We Used To Live’ has a surprisingly broad appeal that could pull in listeners from other roots music spheres. Although celebrating sounds that occasionally appear a little unrefined, the EP doesn’t ever come across as too niche and it’s in that careful balance that the music’s real strength lies. There are times when Damiani’s talent for a lyric and a melody plays second fiddle to his prowess on the acoustic guitar, but even so, ‘How We Used To Live’ is a strong offering all round.