When Steve Hackett left Genesis at the end of the ‘Wind & Wuthering’ tour in 1977, for some of the more dyed-in-the-wool prog fans, that signified too much of a potential change waiting in the wings.  The fact that the three-man band of Phil Collins (drums/vocals), Mike Rutherford (guitars/bass) and Tony Banks sounded more commercial upon their return and even scored a genuine hit single with a pop ballad marked the end for some.  For those, supper had gone cold.  For the fans Genesis lost at this time, their new, more commercial sound gained new fans in droves and although the band became far less prolific – partly due to all three members embarking on extra-curricular recording – it marked the beginning of a very commercially successful decade.

The Genesis hits of the eighties – especially ‘Mama’ and ‘Invisible Touch’ are still in regular rotation on some radio stations many years after being written.  The band’s albums throughout the eighties and beyond are home to some really fantastic pop/rock; it may not be ‘Watcher of the Skies’ anymore, but with Phil Collins (star of ‘Calamity The Cow’ and maker of divorce-themed world beating albums, for a time, Genesis could do absolutely no wrong in terms of commercial success.

When Collins bowed out in the early 90s, it came as a surprise when Banks and Rutherford announced their continuation with ex-Stiltskin vocalist Ray Wilson.  When a hugely successful and popular frontman steps down, it’s sometimes difficult for a band, but with the resultant ‘Calling All Stations’ Genesis left the world with a really solid, hugely underrated release.  It’s one that some fans have never heard…and one that neither Banks or Collins even seem to acknowledge.  Filling some pretty big shoes belonging to a particularly small man, Ray gave it his best shot.  Those who like ‘Calling All Stations’ really like it, but that’s never been quite enough to give the album it’s full due.

In our second Genesis poll, Real Gone invites you all to cast your votes for your favourite songs from the second half of the band’s celebrated career.  With fewer epics on offer, there’s every chance the results here could be more interesting.  Do you like the pompier parts of ‘And Then There Were Three…’ and ‘Duke’, or does the sharp pop of ‘Invisible Touch’ lift your spirits?  Tell us…

As always, you have ten votes to cast where you please and polls close at the end of the week. 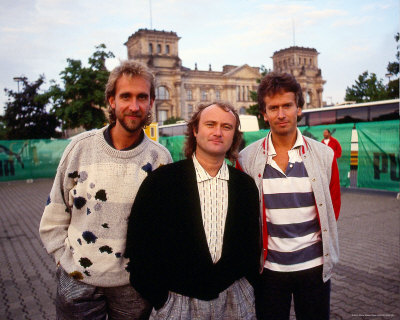