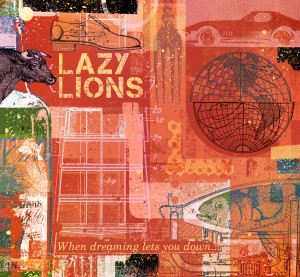 Lazy Lions is a project bringing together the talents of four musicians whom, in their own words, “have been around the block enough” to have an extensive musical CV.  Frontman Jim Allen has had a prior career as a singer/songwriter; bassist Anne Marie Stehn was previously a member of Antigone Rising; drummer Sean McMorris has recorded his own material in addition to being a seasoned session guy (most notably for Television’s Richard Lloyd), while guitarist Robert Sorkin previously held a place within the Monterey Symphony.  Unsurprisingly, with his song writing skills and big vocal presence, it’s often Allen who appears to be firmly in the driving seat. The band’s preferred sound borrows heavily from 70s power pop and a few later Elvis Costello devotees, but essentially what we have with ‘When Dreaming Lets You Down’ is an adult pop/rock affair that almost seems timeless. There’s a loudness to some of the material that occasionally belies the Lions’ latter-day rechanneling of these older sounds as opposed to this being a 1984 recording, but in terms of songs, these could have been written by anyone at any time.

Closer inspection shows a few of these tunes to be very strong, particularly the sneeringly titled ‘Let The Bad Times Roll’, an odd hybrid of 70s pop, the lyrical bite of Edward O’Connell and some unexpected bar-room coolness, akin to indie-jazz merchants Morphine (sans saxophones).  This is principally a showcase for the rhythm section, with intermittent punchy bass playing against some rattling drums, although a deep twanging guitar ensures there’s plenty more retro enjoyment.  This slightly jazz-tinged style also suits Allen incredibly well; a man with a deep and often fairly loud delivery, it might be fair to say his approach to the vocal mightn’t be to everyone’s tastes, but when given this kind of material, the natural timbre in his voice shines through.

A simple waltz, ‘Freezing’ comes across like Costello crooning an old Tom Waits ditty, centring around a keyboard drone akin to a harmonium and a deep voice.  As with a few of the other tracks, the vocals are mastered in such an upfront manner, if you don’t like them, there’s a good chance of it rendering this tune – and parts of the rest of the album – very hard to listen to.  If you can make it past that, though, there are a few nice flourishes throughout. Keyboards replicate the sound of a piccolo and a Spanish-inflected acoustic solo adding to the old-fashioned atmospheres within the tale.  Despite the protagonist repeatedly stating “Jesus, it’s freezing in here”, by the end of this number there’s a good chance you’ll find it has a homely warmth and deep human quality alongside its honest air.

For those hoping for something rather more upbeat, ‘February’ fares well with a heavy 70s power pop bent, a retro organ and a few catchy “ba ba ba”.  Despite taking a fairly dominant role, the drums are measured; the guitars switch between big chord progressions and a staccato flourish, while Allen tackles his vocal with gusto.  Herein lies the album’s only real flaw: atop such joyous sunny pop/rock, his boomy style seems at very much at odds with his band mates and there’s a fair chance that’ll lose a few ears along the way. ‘Tiny Little Cracks’ finds the quartet more settled overall. The drums come with a understated and flat sound – the kind the 1980s dispensed with, for better or worse – always anchoring a simple beat, while a punchy bass dances throughout.  With a few stops for good measure, this number excels as an exercise in tightness, showcasing the band’s brand of pop in a wonderfully succinct fashion.    While some are likely to hear traces of Elvis Costello in the lead vocal with its very affected style, the presented drawl also draws comparisons with a vocalist of a lesser-known nature: here, perhaps more so than on any of the Lions’ other material, there’s a tone that instantly reminds of Cowboy Mouth’s Fred LeBlanc. This comparison to one of alt-country’s most cult figures is heightened by the two-step influence in the music – this is pop that sounds like it might embrace country if someone lets go of the reins.  It’s a little different from some of the Lions’ best material, maybe, but always shows the same confident streak.

Both ‘Susannah Rachel’ and ‘You Can Run’ offer plenty of twangin’ guitar on top of basslines with a hugely pleasing tone, the elements adding together to create something that’s friendly on the ear.  While the easy retro pop of these tracks could rank alongside a few of the more marginal acts from the Athens set, there are the odd twists in the former that ensure these Lions aren’t gonna make it as friendly as it could’ve been.  Like some of the other upbeat numbers, Allen’s vocal doesn’t always sit squarely – in fact, here more than ever, his untrained voice sounds like the voice of a man in totally the wrong band – but in terms of quirk, he’s actually upstaged by a wonky mid-section, full of discords and off-key tones.    Bringing things back down to a maudlin mood, ‘Creep Across The Night’ is truly wonderful; a slow bass provides the structure, muted brass brings smoky cool, a deep croon recalls Mark Eitzel.  This could be a different band to that of ‘February’ or ‘You Can Run’ – it’s certainly the sound of this band’s true(st) calling.   These voyages into darkness only happen infrequently, but perhaps that’s what makes them so cool.  The jazzy tones bring out the best side of Lazy Lions – the classiest side, even; when tapping into their shadowy, dark side all four members of the band can be heard bringing something of great importance to the end sound.

For some listeners, some of this disc has a danger of being marred by a love it/hate it voice, but if you go in with that firmly in mind  then it shouldn’t come as too much of a shock – and ‘When Dreaming Lets You Down’ is definitely worth persevering with.   The power pop tunes are (mostly) good, but it’s the moody, introspective outings that make this long player worth hearing.