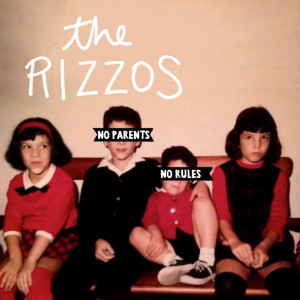 A lo-fi alt-rock trio from Brooklyn, The Rizzos will already be familiar to some DIY music aficionados due to their inclusion on the second King Pizza Records sampler issued in November 2014. Their track ‘Do Anything I Want You To’ celebrated the sounds of early 60s girl groups with its post-doo wop sounds, taking Phil Spector’s dream and running it through several fuzz pedals en route, ending up sounding like a restrained Kat Bjelland playing The Crystals.  In just under three minutes, The Rizzos proved they had some reasonable chops, paving the way for their then upcoming release.

Three months on, the band celebrated the new year in style by putting out their first EP.  ‘No Parents, No Rules!’ captures more of their DIY charm, though interestingly, very little of the sound of  that earlier track remains…   Still recognisable as being the same band, it doesn’t always quite have the same spark, though their shifting away from such a heavy influence could be deliberate.  ‘Worth It’ comes across at a slow pace, with drummer Bettina laying down a steady beat from the start, and its a beat that never wavers.  Over the backbeat, guitarist/vocalist Megan Mancini dominates, throwing out large garage rock chords over which her slightly drawled voice has an attitude. By the time the band arrive slightly belatedly at a chorus, the drums break into something rawer, the heady beats fleshed out by rattling cymbals.  In terms of song writing, The Rizzos believe in keeping things basic, a two part harmony tackling the chorus line repeatedly until it’s time to move on.  While there’s a slacker cool at the heart of this tune – the three piece clearly channelling some lo-fi riot grrrl credentials – it doesn’t quite live up to the potential of the track from the sampler at first, but once you’ve tuned in, in terms of slow and pounding garage sounds, the sneering attitude has its own charm.

Tackling something much faster, ‘Vomit Kiss’ is an instant garage rock classic.  Megan’s guitar sound pulls as much from the early proto punk of Real Kids as it does Mudhoney’s Steve Turner with its repetitive clanging sound, always kept buoyant by an underlying noodling bass from Justin Ferraro.  Throw in some vomit sounds, a trashy beat made for bouncing around and an all-round couldn’t give a fuck attitude and this is a quick glimpse of what The Rizzos do best.  Trashy, almost timeless fun guaranteed.     Last up, ‘Late Nights’ combines the best elements of both tracks: Justin shows himself to be a fine bassist, Bettina’s drumming shines through on a rolling intro, Megan’s naturalistic voice sounds like a 90s slacker indie pop dream.   A chorus is mostly absent, instead a stretched out vocal fills the space, but the general speed and rhythm of the track ensures it’s never leaden.

With traces of the earlier Sleater-Kinney, or that dog. played in a deliberately flat manner and a few other 90s girl bands acting as a springboard – whether deliberately or otherwise – ‘No Parents’ brings sounds as relevant at the time of release as when they first broke through decades earlier.  The EP may get off to a wobbly start and the recording budget may be very small, but the sense of DIY fun is big enough to carry The Rizzos through.