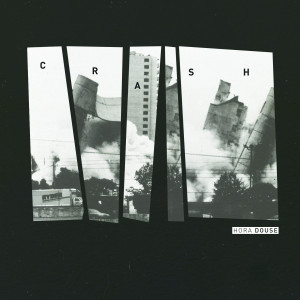 On their ‘Crash’ EP from 2014, Mancunian alternative rock trio Hora Douse convey a sound that’s as familiar as it is ambitious; strands of math-rock collide with a more classic nineties sensibility, leaving behind three tracks that cover a huge array of influences and moods within what feels like a tiny fragment of time.  These guys aren’t out to make noise for noise’s sake – even though there’s a time and a place for that.  The three songs are angry, but not always confrontational, within their music – for those willing to invest the time – there’s a real sense of heart.

Hora Douse aren’t content with breaking their listeners in gently, however. The title track doesn’t even give us the courtesy of an intro – from the second the music starts, the lead voice is out there front and centre spitting words over an angular riff. Upon first listen, the relentless bashing of the snare drum creating a hard and simple backbone is comes across as particularly aggressive, but that’s not to say the track is simply constructed.  Around this, there’s a heavy chug in the guitar part – very much of of a post-punk/indie persuasion, while a couple of time signature changes offset the otherwise solid alt-rock elements.  There are brief glimpses of lead bass complexity, a teasing with a muted riff during a bridge and despite this all round busy-ness, the band have still managed to include a fairly memorable and surprisingly melodic hook.  In just two and a quarter minutes, it manages to achieve a frightening amount.   Frenetic is clearly still the watchword as they band shift gears into ‘Bored’. Clocking in at under two minutes, it shows the band in an even more interesting way.  Tackling something that’s very much a cross between angular post-punk riffery and noise rock attitude, the tune drives forward at a relentless pace – with hints of the fastest Therapy? tunes (‘Bloody Blue’ springs instantly to mind), but the pace is often offset by a few offbeat math-rock time-signatures.  With the quirky tune complimented by a vocal that’s angry yet always holding back, there’s a feeling that this is the musical equivalent of entrapment and frustration – a ticking time bomb set to explode at any time.  The band are incredibly tight with no sloppiness within their world of alternative chops, it’s hard to imagine they could ever be any more intense than this.

Almost as if they’re finding a way to exorcise some inner demons, ‘Speak’ is incredibly mellow by comparison.  Soaring guitar lines weave in and out of jangly riffs, while the vocal has a definite ache, teasing with an almost emo sensibility that seems a world apart from the near-dangerous approach throughout the prior number.  It shows that Hora Douse have grand ideas beyond angry statements; this is the work of a band set to win over the hearts and minds of those whom encounter them.  The sheer melodic qualities of ‘Speak’ are such that once it’s over, there’s a feeling of being let down – not only in that you may find yourselves feeling you want to hear more from this band almost instantly, but the effect is surprisingly moving, as if you’ve somehow been affected by the singer’s mood as he delivers each line.

Whether you like it angry or downbeat, in an alternative rock sense, there’s something engaging here.   Set aside eight minutes and wait for Hora Douse to really win you over.  Eight minutes are all they need…

[Although recorded in 2013 and released as a download in 2014, ‘Crash’ was reissued on cassette by Withdraw Records in 2015]