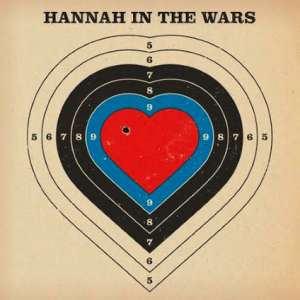 The stage name of New Zealand born singer-songwriter Hannah Curwood, Hannah In The Wars is a vehicle for soft, dark and occasionally bleak soundscapes – a mix of the piano balladry of Nick Cave and the Bad Seeds, The Last Town Chorus and a touch of Mazzy Star.  This, her third release, is rarely anything shy of being a gloom-laden masterpiece.

A touch more forthright than the bulk of the material, the opening number ‘Burning Through The Night’ centres around a hard-strummed guitar, it’s repetitive chords well suited to the resultant repetitive chorus, on which Hannah pushes the louder, crying end of her voice.  While the dark, retro sounds demand the attention of the listener and are enjoyable in a moody style, they’re not always completely representative of the tunes that follow…though if you find yourself liking this, chances are you’ll be smitten by the remainder.  ‘The Hunter’ is far superior and a good indicator of Hannah’s world, a slow waltz played by piano and cello, over which the vocals settle for something akin to Hope Sandoval meeting with the early ‘Glow Stars’ material by Heather Nova.  Naturally, the lead vocal asserts itself as the element from which all the components must centre, but the band are superb throughout.  Occasional plucked bass, the piano always teetering, drawing us in farther with each listen – a great track.

Sparser still, ‘Watch The Dog Grow Old Together’ is a tale of mortality, at first with solitary piano bringing a circular melody. Over this, the lead vocal sounds incredibly fragile, carrying a rising and falling counter melody, occasionally cracking under the weight of the simple but direct emotions.  A deep drone and wordless vocal act as a chorus refrain, adding an unease to an already uneasy situation.  While lacking the all-encompassing blanket of ‘The Hunter’, it’s fairly typical of the artist’s way of confronting a dark world.  At the mid-point, ‘Only Wanna Be’ is one of the more accessible tunes, meling Hannah’s usual bleakness with a kind of piano-pop that might befit Sarah McLachlan, before ‘Like a Stone’ waves a truly dark musical shroud over everything. With Hannah’s voice placed against the sounds of a Fender Rhodes, the results are superb; the deep rumble of the electric piano automatically gives everything a sense of retro unease, while the vocal – here more than anywhere else – taps into her Kiwi accent.  As the tune gathers momentum – and any momentum here is a naturalistic slow crawl – the haunt disappears but the hurt remains.  In many ways, ‘Infidel’ represents the pinnacle of Hannah’s talent, as her echoing, world-worn voice draws in the listener with each passing line.  While the occasionally accompanying piano chords help to give the piece a real depth and the idea of bringing in the percussion at the end creates a definite climax, it’s the pairing of her voice and a hard-strummed electric guitar that really appeals – much like a reimagining of the wondrous Mazzy Star, seen through the eyes of the Cocteau Twins and the 4AD label.

Moving towards the close of an already great release, the final pairing of tunes finds Hannah in a very strong place, first pushing the ambient elements of her music to the fore with ‘Lay Your Hands’.  A belated interlude of sorts, filtered vocals add a dream pop styling across a percussion free drone, before finally leading into ‘Dark Summer Dawn’, a glorious celebration of ambient pop and jazz, all rustling drums and hard-plucked upright bass.  One of the more upbeat tunes on this album, it’s good to end on a high – but obviously there’s still a darkness pulling at the heart.  The collision of sparse piano and elastic band-eque bass work provides instantly likable sounds, but it’s the smooth confidence in Hannah’s voice that leaves its mark.  With a higher register than some of the material, she calls out with a definite cry, under which soaring strings fill sounds against that aforementioned bass.  Like a cross between The Last Town Chorus and the quieter sounds of Sophie Zelmani, this provides great late night listening.

Created at times of family crisis and natural disaster, the introspective sounds come from a place of desolate beauty, of thought and reflection.   This is an album that although soft, is rarely background music – the voice and general sense of pain command an ear at all times.  Potentially one of the finest discs of 2015, this low-key and moody affair is the work of a great, if rather understated, performer.