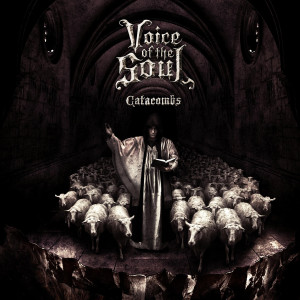 Forming in the late noughties when the band were just teenagers – young enough to rival Def Leppard in the precociousness stakes – Voice of the Soul always had very grand musical ideas.  Following three self-released EPs between 2009 and 2011, the Middle Eastern extreme metallers found themselves in a great position to expand on their previous works.  Taking to the studio in early 2014, the band set about making their first full length release – and in melodic death metal terms, the dark and sprawling world conjured up on ‘Catacombs’ does not disappoint.

‘Desolation’ brings clean semi-acoustic sounds and a gothic horror appeal by way of an intro before ‘Perpetual Deception’ explodes with metallic fury.  There are pneumatic drums – as very much de rigeur – and a deep, unsettling growl of a vocal borrowing from classic death metal angst, but in the musical department, Voice of the Soul have more to give.  A keyboard drone adds extra beef, while crisp electric leads mix old school styles with just a touch of technical prog-metal charm.  Moving on, once the roll of the drums subsides, there’s a deep chug powering a belter of a tune, while those keys – still there beneath – wail like a mechanical choir.  Throwing in a complex and impressive lead break, this has a little of everything you’d want from an extreme metal workout, but often having the good sense to blend the aggression with smart melodies.

That, in just over five minutes, is a perfect capsule of the VOTS ethos.  Although slightly heavier, ‘Pendulum’ is equally cool from a technical standpoint, often pummelling hard rhythms in the head of the listener.  Staccatto riffs and a drum pedal trigger provide the main appeal at the number’s end, but building up to that point, vocalist Kareem demonstrates more of his uncompromising approach to a vocal, while the bass steps into the spotlight with a truly fantastic and  natural style – the bass work on this number is especially impressive.  Showing more of their dark and doomy edge, ‘Perdition’ kicks off with another deep drone and mournful bass, worthy of many a doom metal tune.  Quickly things break into another mechanised rhythm driven by pneumatic beats and a crisp lead guitar.  There’s a gentle eastern mood colouring a few of the lead guitar riffs, but any temptation for things to develop into a more obvious (and slightly passé) ‘Kashmir’ style has been swiftly avoided.  The relative melodies often shine through a veritable wall of sound, resulting in a tune that moves towards early Opeth and classic Obituary.

Those looking for a slow and oppressive riff should head straight for ‘Images Subside’, the doom-laden album closer.  In terms of classic riffery it’s among the disc’s very best, while it’s outright heaviness has been balanced by haunting piano lines and a wall of clean vocals.  In the inclusion of clean voices, it’s set apart from so much of VOTS’ other material, but fear not, it’s no less heavy overall, due to Kareem’s full-on growl dominating.  Within this rather sprawling five minutes, the band take you on a rather grand journey: there are clean guitars and old style twin lead breaks adding much to the epic arrangement; the aforementioned increased use of keys, a few crooned vocals (perhaps closer to Tool) appear somewhat thoughtful, while the lead voice keeps things grounded in extreme metal territory.  In terms of the style, it doesn’t get much better than this.

The vocals will certainly be hard going for some – no amount of hard-sell is going to win over those who dislike a guttural growl – but this release is full of great musical arrangements, right from the get go.  Combining pneumatic rhythms with a deep production style, throughout these eight tracks [nine, including intro] Voice of the Soul often sound like a real musical force, making ‘Catacombs’ a release that fans of the style should not miss.