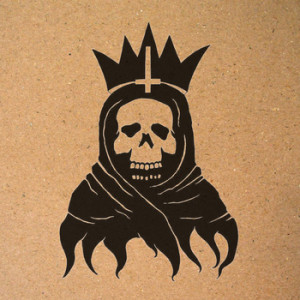 Three songs, seven minutes, seven inches of black plastic.  That’s all that’s needed for you to work out that Colchester noisemakers La Muerte mean business.  On this debut EP, the tough musical trio blend garage rock, punk with a touch of metal for extra punch and come out sounding like a cross between Misfits, Killing Joke and Limb – a combination of gritty noise that’s guaranteed to leave an impression…one way or another.

Given the short running time of this EP, however, they don’t go all-out in an instant. A distorted sound, some feedback hint at a fairly intense beginning, before the descending scale at the centre of their theme song announces La Muerte’s arrival with such direct simplicity, as if they know the classic sounding  riff should be enough to catch your attention. And then with that, it’s headlong into a thrashier riff – a metallic sound with a garage rock intent, the shouty vocal occasionally slipping into a defiant Glenn Danzig croon.  ‘Snacks & Wax’ kicks off with a grumbling bass, a grungy garage rock sound best befitting of the earlier Melvins, before tapping into particularly grubby metal groove that befits the band’s dirty delivery on all fronts.  A distorted voice chews threw every line with an unavoidably English charm – with hints of Killing Joke’s Jaz Coleman – but its the moments between where the riff dominates that La Muerte’s real allure is most obvious.  That’s not to take anything away from the vocal, of course, the naturalistic shouting provides an important part of the overall picture – each line spat rhythmically and with a surprising amount of anger considering the rather disposable nature of the song’s subject.

‘Deathwish’ shows off the band’s best side, with a workout that’s settles somewhere between early Motorhead and the Supersuckers – speed and simplicity very much of the essence.  As before, the vocals have a defiant presence, fuzzed up for extra attitude, but the combination of spiky rhythm guitar and impressive drums wins out.  Considering the track ends with the three guys literally busting a gut in the speed department, driven by thrashing drums, there are some complex fills along the way, suggesting La Muerte could certainly be capable of playing more intricate music, but based on this, they don’t need to – they have a very enjoyable sound as it is.

This three track EP gives a great representation of La Muerte’s musical manifesto – loud, fast…and faster. Although over far too quickly, its sonic punch is defiantly hard.  It’s brash, snotty and wholly unpretentious – the sound of a horror-fuelled snack binge run through several distortion pedals after a lack of sleep.  Ugly, edgy and yet utterly satisfying if played loudly enough.