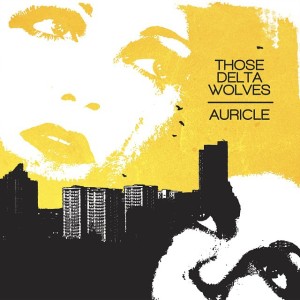 Those Delta Wolves are an alternative rock band from Leeds. A city with no shortage of musical talent, The Wolves would already have to work incredibly hard to stand out, but the three tunes on their debut EP ‘Auricle’ suggest that, in the live setting, these guys are already a force of nature, ready to crack to skulls of their awaiting audience.

From the get-go, this release is a no-nonsense affair, ‘Hide & Seek’ kicking off with Killing Joke-esque shrill guitars and crashing drum.  After a few bars, they change tack and settle into a heady groove that combines hard chopping riffs and an extremely confident vocal.  Within a couple of lines, singer Jonny Van Grun asserts his presence, pushing his voice from a full moan to a defiant rock shout within just a few lines.  The rest of the band are behind him all the way: the lead guitars career across several bars with a defiant attitude when called upon to do so, but it’s the combination of hard driving riff and meaty bass part (courtesy of Ben Parkinson and Aaron Palenzuela respectively) that really catch the ear.  The guitar riffs straddle that fine line between chunky classic rock and alternative chug; an important stylistic choice for the Wolves’ dirty sound.  With little fuss, they slide straight into ‘SGMC’, which essentially brings more of the same, while giving drummer Mark Scott a harder workout.  As before, the lead vocals are strong and the riffs stronger, but the track belongs to the bass.  Given a brief burst flying solo, Palenzuela’s fat and distorted sound commands the same presence as JJ Burnel’s best work in the 1970s combined with the dirtiness of Krist Novoselic on the low-budget Nirvana debut ‘Bleach’.  In terms of bass sound, he’s only beaten by a fellow Leeds musician – Tom Goodall from Cattle – whose work represents one of the best bass sounds ever committed to plastic.

While the previous tracks are great rockers, its with ‘Yellow King’ Those Delta Wolves really come alive and show off their full potential.  A slow, lurching blues, there are hints of the defunct Skeletons In The Piano at the core, something expressed by fuzzed out, heavy wah-ed guitar parts, but it’s the lead vocal that really shines.  Trading in his rock screams for a quasi-Danzig croon, Von Grun unleashes a slightly threatening side as he delivers each line with a dark menace, while Palenzuela cranks out overdriven, slightly distorted bass notes to suit.  Like The Doors taking a sidestep from bad poetry and circus music and throwing themselves into a mire of hard gothy blues-rock, this is a track not to be missed.  For the big climax, the band eventually revert to their more comfortable hard rock, but this gives Von Grun a chance to slide effortlessly back into post-grunge belting, giving his vocal chords the full work out.

And with that, the Wolves leave you wanting more.  These three tunes bristle with energy and attitude, the sound of a great rock band in the making.  With an equal interest in aggression and alt-rock melody, with ‘Auricle’, Those Delta Wolves offer something very enjoyable indeed.