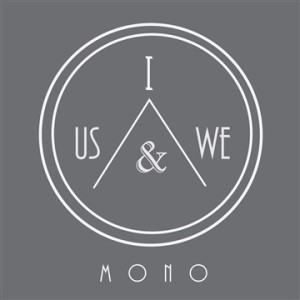 Blending elements of dream pop and synth pop, California’s I Us & We create a fairly spacious, yet melancholy sound on their debut EP ‘Mono’.  Like Australia’s MNTNS, their core sound is heavy on electronic drones and synths, but thankfully like the more melodic elements of Moby or the very best parts of Depeche Mode’s expansive catalogue, somehow manages to eschew most of the coldness that such humanly detached sounds might conjure if left in the hands of the lesser talented.

‘Sunday’, a number which circulated the net prior to the EP’s release, is perhaps best representative of the band’s musical outlook.  A high tenor vocal cries each line, suggesting “we can only run so far”, needing in tone, pleading with the outside world for love and acceptance.  What might’ve sounded like self-pity, in fact, comes out as heartfelt, thanks to a huge musical backdrop – slow beats, huge synths and – ensuring that extra layer – the occasional sounds of a ringing guitar fleshing everything out.  In terms of pop, you’ll find this to be both accessible and beefy, ticking the right boxes for those who like their tunes with a huge and spacious feel.   Similarly low-key, ‘Free’ has a cold and detached, slightly Scandinavian quality despite the band’s US origins.  The bulk of the tune utilises slow drones and a steady beat, pitched against another high end vocal, fragile and breathy while other noises crawl from within, sounding much like a treated guitar run through electronic treatments.  The guitar eventually rises for a very brief solo, at first seeming a little out of character but still providing an important interlude.

Soaring guitars provide the main thrust of the intro of ‘Alive’, though the keys and electronic elements soon take over.  The drum is doused in echo for extra atmosphere, while the lead vocal is perhaps the most melodic on offer.  The deepness of the arrangement combined with a wistful voice calls to mind a couple of the more low key tunes by Norway’s Team Me, though some listeners will also here elements of Moby as a core influence.  Lyrically, there’s a universal sentiment – “love is keeping me alive for this moment” – and although the tunes should perhaps feel as mechanical as before, the longing in the voice  combined with the beefy sound actually gives this tune a fairly emotional heart.  The EP’s best number, ‘Lanterns’, quickens the pace.  A sequenced beat and steady rhythm provides a rarely changing pace over which occasional synth lines evoking the youthful Gary Numan add extra textures, while a breathy vocal with a classic stylistic meter make it almost impossible not to think of ‘Black Celebration’-era Depeche Mode when listening for the first time. Subsequent spins expose extra charms; a much tougher sound and a general moodiness that ensures this never feels disposable at all, and while the music dominates on most of their material, here more than ever, a particularly well-structured chorus suggests these guys might have some reasonable song-writing talents.

These four tunes, the opening gambit of four body-painted mystery men, are aloof yet inviting, mechanised yet full-blooded, sounds begging to be cranked.  While their brand of electronica veers closer to the pop side of things than the alternative, their relative simplicity provides the real charm.