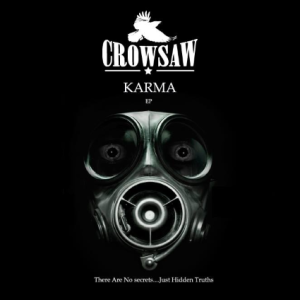 The intro and subsequent verses of ‘The Answer’ almost throw extant fans a bone via some retro sounding clean guitar works and naturalistic vocals and also again via an echo-driven mid section.  However, by the time the chorus hits and vocalist/guitarist Rob Lomax really lets go, the new and improved Crowsaw are set to impress.  With a heavy dirty tone, his guitar riffs are as heavy as the bulk of Dream Theater’s output (although, thankfully, lacking that band’s coma-inducing self-indulgence), while his voice is almost as huge – often forceful, but always melodic.  Making things heavier still, drummer Mark Pullin throws in a compliment of double bass drum pedals along the way, by which time, there’s no denying the talents of this rejuvenated power trio – where power is very much the watchword.

Captialising on this sound, ‘The Colours’ is even more complex, with the band sounding even more assured in their shiny metal boots.  Jazzy notes provide a base over which bassist Glyn Mason cranks out a distorted riff, and surprisingly, this sound manages to sound melodic while simultaneously hinting at something heavier just over the horizon.  These elements are first bolstered by huge ringing chords, before Lomax reverts to a classic sounding heavy riff to rival ‘The Answer’.  Moving through a hugely melodic chorus that has a distinctly European flavour, Lomax and Mason show off their combined vocal talents to great effect.  All of this would make for a great track, but the instrumental break with the musicians hammering their fretboards is incredibly impressive.   Last up, ‘Believe’ capitalises on all of the best parts of the previous numbers:  there’s a huge, melody focused hook, a powerful vocal and crushing riff.  There are bigger hints of progressive metal in the time signatures, and perhaps here, more than elsewhere, Pullin really hits the mark, with a few jazz-inflected fills as well as powerhouse drum rolls and crashing snares to rival the best metal drummers.   Combined, these three numbers are amazing – it’s so easy to listen to them on a loop and still feel like you could discover something new next time around.

In the words of frontman Rob Lomax, ‘Karma’ presents “…a new start.  There’s no point in denying who [Crowsaw] really are.”   One listen to this and it’s so easy to understand where he’s coming from.  The metal elements charging these three songs sound absolutely natural, as if this was always Crowsaw’s calling – so much so, you have to wonder why they didn’t just opt for metal-based tunes in the first place… Despite having its deserved supporters, ‘Smoke & Mirrors’ was okay for what it did, sure, but it wasn’t great.  This isn’t just great – it’s immense. It could easily alienate those who loved Crowsaw’s previous work, but ‘Karma’ has a sound and attitude that’s set to win them new fans aplenty.