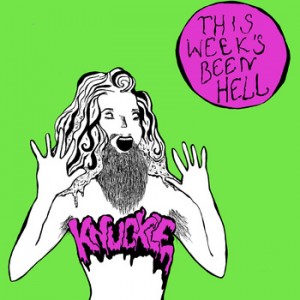 Clearly wanting to make an impression – good or bad – Knuckle are at their most uncompromising during the opener, the amusingly named ‘Knuckle Shuffle’.  Given the use of the word shuffle, it wouldn’t be unreasonable to expect an obvious groove, maybe akin to The Dead Exs‘ ‘Nolita Strut’; or a tune that swaggers with an extreme confidence.  We get that via a killer riff in the intro and recurring on occasion, but the rest of this particularly frenetic ninety seconds involves drummer Ben Wallbanks delivering something that sounds like a raucous drum roll while vocalist/guitarist Johnny Firth sounds like Mark E. Smith shouting into a bucket. The confidence is there by the truckload…if they’ve not scared you away, there’s a strong sense of there being better to come.  The slow and brooding ‘Apocalyptic Kiss’, takes a distorted blues guitar and weaves a magical slow groove over a pounding bass and snare.  There’s still a rawness here, but the anger is channelled into a far more accessible tune; the blues groove takes hold very quickly and never fades, showing off some solid guitar chops, but it’s Firth’s lead vocal that makes the piece.  With a bit of reverb for effect, he wails each line with intent, ensuring long cries of “oh yeah” and “all right” linger in the memory much like the performances of the youthful Ozzy Osbourne circa 1970 (certainly in intent if not especially in style).  Slow and moody with a great presence, this doesn’t necessary sound like the band who pummelled our senses previously, but is effortlessly cool.

By the time ‘Hand Grenade For a Heart’ rolls into town, Knuckle have really found their stride.  The drums rattle and the guitars wail as the garage rock grubbiness takes on a more rock ‘n’ roll mantle.  Firth’s confident croon chews through each line with professionalism, his guitars drive forward at full throttle laying down a danceable groove until the end, when things decend into a metallic, grungy chug – swapping the Jon Spencer-esque sounds for a dirgy vibe more akin to those aforementioned and over-rated major label puppets Royal Blood.  In just under three minutes, this shows Knuckle’s full potential and their musical fire at its most accessible without losing any of the power.  At this point, you should be totally sold on these guys – each of these tracks, although very different, adds up to demonstrate a very broad talent.

The second half of the EP has a more melodic sense (relatively speaking), and if you like it raw, may not reach the heights of those earlier tracks.  For fans of Royal Blood and – to a lesser extent – Jack White and The Black Keys – the remainder has a tough and tuneful approach that seems designed for a bigger audience in mind.  Stripping things back for staccato chords and a naturalistic vocal, ‘Ejector Seat’ has an intro that sounds out of step with Knuckle’s key sound at first, but the arrival of a solid drum line for the second verse rounds out the sound giving things a more traditional garage rock sound.  This provides the bulk of the rest of the number, but those looking for more noise will be pleased to note some really distorted guitars and wordless vocals in place of a chorus are on hand to crank up the intensity.  With a video released to promote this EP, ‘Bad Brains’ is a fuzzy, stoner-esque tune, heavy on the riffs – once again with  more than a passing resemblance to Royal Blood as multi-tracked guitars fill spaces where other bands would use a chunky bass.  In the quieter moments the lead guitars have a tuneful quirkiness, but this track really is all about the relentless fuzz, right up until and squealing lead guitar break pulls things to a close.   Taking a similar confident stride, ‘Living Hell’ is a slower affair calling upon a stronger vocal melody to compliment a distorto-blues riff.  If other tracks hinted at comparisons with Royal Blood, this track hammers the similarities home with a giant mallet – the overdriven sounds swamping a steady beat throughout.

With quasi-melody, groove, distortion, ugliness, power killer blues rock and a couple of surprising hooks – Knuckle have each of these within easy reach and pull each out of the bag in turn, ensuring their minimalist approach to band work never sounds too repetitive.   Fans of garage rock and similar grooves should seek out this release at the earliest opportunity – this EP is a winner.