In March 2015, Judas Priest are to reissue their classic album ‘Defenders of the Faith’ to mark its thirtieth anniversary.  Much loved by fans, the album is home to Priest classics ‘Freewheel Burning’ and ‘Some Heads Are Gonna Roll’.

The new deluxe edition pairs the studio album with a complete live show – two disc’s worth of live material recorded on the ‘Defenders’ tour of ’84.   Unlike the two previous Priest deluxe editions, no visual material is included, despite the band making a few TV appearances to promote the original album.   The extended 12″ mix of ‘Freewheel Burning’ is also omitted.

This release follows the band’s 2014 studio album ‘Redeemer of Souls’ and marks the first time the Priest archives have been raided since the release of a deluxe ‘Screaming For Vengeance’ CD & DVD set released in 2012.

DEFENDERS OF THE FAITH DELUXE EDITION 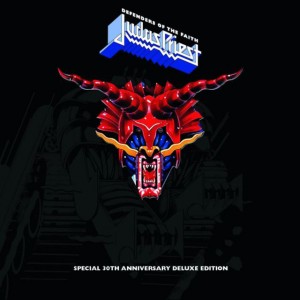 Read a review of ‘Sad Wings of Destiny’ here.