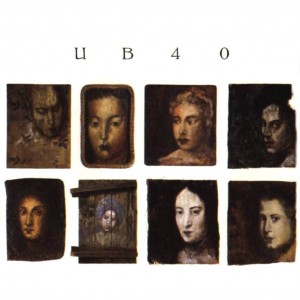 After this, expectations were high for future UB40 reissues, but the years passed without a word.
Anniversaries of other albums – most notably the classic ‘Present Arms’ and much-loved covers record ‘Labour of Love’ – came and went uncelebrated in reissue land.  [In the absence of anything happening, Real Gone looked at a hypothetical ‘Labour of Love’ reissue in March 2014].  Finally in the summer of 2014, it was announced that ‘Present Arms’ would be reissued in November.  No official tracklisting for what was to be three disc set appeared.   The November release date came and went.  The release was put back to January 2015.  By December, the release date was set back further still, with a proposed date of February 2015 – still no details about what said reissue was to include.

It seems, therefore, that UB40 fans may have a long wait on their hands if they’re patiently hoping for lavish reissues of ‘Geffery Morgan’, ‘Rat In The Kitchen’ and the like.   This means more rumours and sketchy thoughts as to what such reissues could contain, in the unlikely event of them ever happening at all…and if their self-titled release from 1988 was ever denied such revisitation, that would be a travesty.   Real Gone looks at why ‘UB40’ desperately needs a reissue below.

In 1987, UB40’s career hit a high when they became one of the first Western bands to play to a huge audience behind the Iron Curtain in the USSR.  After this career high, their following return to the studio and the resultant album could feel underwhelming, especially being an album that takes longer to work its magic than the well-known ‘Rat In The Kitchen’.  Fact is, however, 1988’s ‘UB40’ includes some fabulous material.  The band’s political slant is heard in great form on the rarely heard single ‘Come Out To Play’, Astro’s vocal contributions show both sides of his style – in ‘Contaminated Minds’ he delivers one of his best performances since ‘You’re Not An Army’ back in ’84 and ‘Music So Nice’ is a great slice of reggae pop.  Proving that tried and tested ideas can work magic, a second pairing with Chrissie Hynde on a cover of ‘Breakfast In Bed’ is arguably far better than the UB/Hynde collaboration on ‘I Got You Babe’ a few years previously…and yet this is hardly ever heard on the radio.  Yes, ‘UB40’ is a fine album indeed, though rarely ever thought of as readily as many of the band’s other albums from their first decade.

1988’s self-titled album, although not as well-known as some of the band’s 80s works should be a priority reissue given the extra material that remains hard to find, or even unavailable on a commercial release, including a feature length video ‘Dance With the Devil’ presenting the album’s songs in a ‘Labour of Love style.

So, what would the ultimate ‘UB40’ deluxe edition include?  A whole world of audio and visual treats – with a lengthy DVD making up the bulk of the essential stuff.  One day, maybe, the world will see such a thing…though, certainly not as extensive, and as always, record company priorities make it seem unlikely.

Disc Three: DVD
Dance With The Devil (The Movie)*

Live at St. Andrews Stadium, Birmingham*
Dance With The Devil
Music So Nice
’Cause It Isn’t True
Red Red Wine
Cherry Oh Baby
Come Out To Play
Rat In The Kitchen
Breakfast In Bed
I Got You Babe
Dub Mobile
I’ll Be Your Baby Tonight (w/ Robert Palmer)
Johnny Too Bad
Sing Our Own Song
I Would Do For You
If It Happens Again
Food For Thought