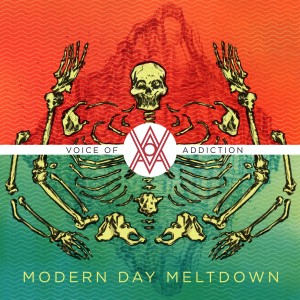 Ten years on from the release of their debut LP and some seven hundred live shows later, Chicago punkers Voice of Addiction show absolutely no sign of getting stale on their sixth release ‘Modern Day Meltdown’.  Its four songs showcase a tough musical style and some rousing choruses, as well as stretching a punky base to allow for a few broader sounding musical passages along the way.  There’s absolutely no indifference within the ranks here; Voice of Addiction set out to grab their listeners from the very first notes…and then keep them.

In a superb demonstration of the bands punk rock chops, the title track provides the EP’s most direct cut, rattling along at a brilliant pace. Led by drummer Andy Bobby Petty whose playing style is pretty heavy on the snares, the band tear through three minutes of great punk.  The drums are concerned more with presence and speed than anything particularly flash, while a (dis)harmonious vocal chews every line with attitude.  There’s nothing especially original here, but there doesn’t need to be – the band are working from a near faultless blueprint, where fans of US punk bands that borrow heavy influence from older English punk – Rancid, Lower Class Brats et al – will find a musical kinship.  Similarly pacey, ‘Juvanescence’ works around a gravelly vocal and pumping bass (courtesy of Ian Tomele), its core sound inviting comparisons with Rancid, but also bands from the second wave of English punk.  The solid arrangement shows all three musicians to be a tight unit – and capable of the surprisingly complex too, a mid-section employing a quirky time signature suggests someone in the band is fond of more arty stuff like Fugazi and Gone – but any flourishes are brief.  In terms of song writing, this provides the release’s catchiest hook with the band members stating in unison “we won’t grow up / we won’t give in / we won’t grow old”.  You want classic older style punk? Look no further.

‘Daley Struggle’ [sic] employs a dual vocal – one voice fairly traditionally punk in both volume and attitude, the other a more distinctive croon, showing more than a hint of Funeral Oration’s Peter Zirschky (RIP) in the delivery.  The combination of voices makes this stick out somewhat between the other numbers, but more than anything, it’s VOA’s combined musical talents that shine through.  The bass sound is great throughout – even greater when allowed brief Fat Mike-esque rattles – and Kyle Tilev’s guitars are tough; this combination results in one of the best overall sounds since Face To Face’s classic debut ‘Don’t Turn Away’.  Just as noteworthy is the simple drum intro which shows off a great, natural sound, made all the better by the bang-up production job from Scott Fritz at Stranded On A Planet.  ‘Same Old Song’ combines grit and melody in an almost perfect fashion.  The chiming guitars and complex bass work have strong influences from Face To Face once again (but that’s never a bad thing), while there’s a heavy focus throughout on gang vocals.  The furiously paced punk sections often resemble the other numbers, but are given a lift by some very pleasing lead guitar twiddles, while a couple of very slow moments build tension.  Once you think the band are done, a coda showcasing a barrage of whoas rises up and a moody guitar accompanies the choir of voices in their unified sound.  Throw in a fairly edgy guitar break somewhere in the middle and this number has a little of everything.  The push and pull between time signatures makes this number constantly entertaining, but also helps to sustain a surprisingly lengthy duration.

It may only be an EP but ‘Modern Day Meltdown’ provides a really balanced view of a hardworking and independent band.  The musicianship is strong, the song writing stronger.  In short, this is a fine slice of punk rock – certainly recommended if you enjoy the likes of Face To Face and Authority Zero.