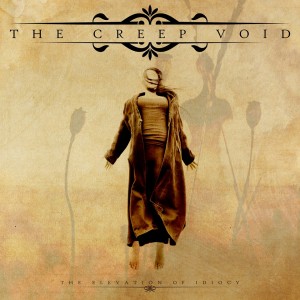 Hailing from England’s North East, The Creep Void are an independent rock band trading in some great post grunge and alternative sounds.  While the core of their work owes a debt to the nineties, the quartet’s 2014 EP ‘The Elevation of Idiocy’ isn’t just a throwback to times of khaki colours and plaid shirts. There are certainly a few unavoidably grungy elements within these four tracks, but the song writing and tough sound places them firmly in the twenty first century – ever looking forward as well as drawing from their classic influences.

‘I’ll Be Your Masochist’ starts rather atmospherically, with Barry Appleton’s lead vocal subjected to various effects, sounding like he’s singing into an answering machine, before blooming into a full sound on the chorus.  The vocal melodies latch on to a soaring and rather basic tune, but that’s all that’s required here.  The rest of the band show a great promise too – the guitars lurch with a sludgy post-grunge intensity bringing a mighty riff, while the drums are solid throughout.  In terms of post-grunge sounds, there are hints of many similar bands lurking throughout this opening track, but to ensure it leaves a strong lasting impression, The Creep Void have an extra trick up their collective sleeve.  The second half of the track focuses more a haunting, vibrato filled cello, which adds so much to the overall sound, pushing things farther towards the gothic. More direct, ‘Persona of Many’ powers ahead with a quasi-grunge riff peppered with a garage rock spikiness, all topped with Appleton’s slightly treated vocal.  A quirky key-change and fast paced lead between verses helps move things along apace, while a selection of backing vocals adds a necessary melodic edge.  While not as interesting as the other numbers, it’s general pace and attitude fleetingly recalls another UK hard rock act, Fire Red Empress, while its more direct approach gives it the feel of a live belter, a feeling reinforced by Adam Hay’s no nonsense approach behind the drum kit.

For rhythms – and bass playing especially – ‘Needles To Say’ shows the band in a far busier set-up from the off.  A hard, chiming guitar part instantly catches the ear, over which a busy bass really adds interest via a complex melody.  The vocals appear in due course, with Appleton tackling a verse that has hints of Chris Cornell in the meter, if not his vocal tone.  These elements combined create a very melodic yet tough alt-rock sound all round. he lyrical content on the resultant chorus isn’t especially clear, but Appleton wails each note with conviction, showing no effort as he reaches for some powerful and lengthy notes.  For the climax, the band seem more than aware that things need switching up a gear and guitarist Chris Hanna steps up to the task in hand, cranking out a fat, downtuned and grungy riff that has a great power.  …And just as those riffs really begin to take hold, the tune stops dead.  Talk about finishing at a peak.  Rounding the EP out to a traditional four songs, the epic sounding ‘When You Look Into The Abyss, The Abyss Looks Into You’ showcases everything that’s great about the band.  While the musical base may not stretch too far beyond what’s been laid down previously, each of the elements is delivered in a superior fashion. The vocals and guitars are tough and melodic throughout, but it’s the rhythm section stealing the show: check out Dean Pegg’s noodling bass busying away almost constantly beneath the crunchy riffs and the crashing drums driving things ever forward without rest.  In terms of post-grunge/alt-rock, this one ticks all the right boxes.  Crank the volume and enjoy.

Four songs, consistently tough riffs and a great professional sound despite its independent origins, ‘The Elevation of Idiocy’ absolutely cracking outing from a band that’s firmly in the “one to watch” category – and a step forward from their previous work (2013’s ‘Apothesis’) in almost every respect.  So many great musical ideas within such a short duration, it’s a pity this wasn’t a full length.