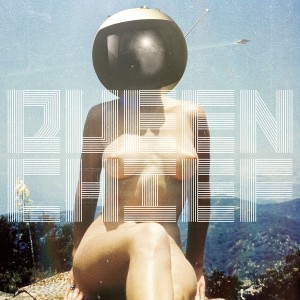 With a neo-electronic edge, heavily treated guitar sounds kick off the lead track ‘North Dakota Spirit’ with an almost mechanical strut – very distinctive and mildly unsettling – before blossoming into a really heavy garage blues arrangement.  Between the heavy riffs and fat bass, Lien’s lead vocal cries out, heavily distorted as befitting of such a domineering arrangement.  Across a strong riff blending those deep sounds with a soaring and lead guitar line, Lien tells the listener how he “brought back some spirits from North Dakota” and his “roots once unclean now rub with a squeak”. The element of storytelling throughout the number is important, although the amount of reverb slapped across everything makes some of the lyrics hard to decipher without a lyric sheet. The main riff is impressive, easily carrying the number alone, but it’s the forceful lead guitar work that brings things to a close that leaves the strongest impression with a huge presence: a twin lead and a couple of multi-tracked elements bring a distinctly seventies vibe (or, rather, a reimagining of the seventies through a nineties filter). ‘False Face’ kicks off with a very distinctive riff with a similar mid pace.  Tackling something not a million miles away from Joy Division’s ‘Isolation’ – or, rather more specifically, Therapy?’s cover of ‘Isolation – this tune already starts with best foot forward.  Such a heavy and simple riff provides the perfect excuse to crank up the distorted elements in the band’s core sound even farther.  The lead guitar parts borrow heavily from 70s blues rock, while squirly electronic sounds add a touch of space rock to the defiantly retro grooves.  Some of the vocals are filtered – in this case a chorus has the voice drenched in echo – and the lyrical content appears to lean toward the spiritual, as the protagonist speaks of rivers and wanting to return to his roots.  The tail end of the track hosts another impressive solo, with Lien battling things out with a second guitar played by Dustin Bartee.

A spooky interlude ‘Stands and Looks Back’ churns out a huge chord like a death knell for just over a minute, before the emergence of a clean acoustic guitar signifies the arrival of ‘Sleeping Under Trees’.  This thoughtful, slow and almost eerie affair pitches minimalist guitar against a hushed vocal covered in swirling and masking effects.  In taking such a stark approach, it really stands out among this material.  Soaring guitar notes and deep bass drones towards the end really fill any available space and while there’s less here for the listener to chew upon in terms of presence and riffs, it’s a strong contender for being the main reason to check out this EP.  Spooky, spooky stuff, indeed.  With a steady beat, ‘Sky Throne’ opens with a solo drum hitting the ears before making way for a tough, chugging riff.  At first the riff seems a bit too familiar – you’ve already heard a similar style on ‘North Dakota Spirit’ – but it soon develops into something far sludgier, its all-round heaviness best befitting of the song’s dark tones…and  as with most of Queen Chief’s material, the riff soon dominates.  Unlike ‘North Dakota Spirit’ it’s not the guitar work that shines here; in this particular case, that would be the chorus, where the guitars drop out in favour of bass and a tripped-out vocal, much like that of ‘Sleeping Under Trees’. The voice is almost ethereal – well suited to the mentions of rain and angels along the way – and smothered in a shoegaze echo throughout.  This has just the right balance between crunch and cerebral quality, a great snapshot of Queen Chief’s rockier side.

Fuzzy, reverb-drenched and yet almost always remaining accessible, Queen Chief’s debut brings some solid alternative rock sounds and thoughtful lyrical content.  It takes a few plays before things really start to stick but, on the whole, these five songs represent very strong beginnings that are almost guaranteed to please that Black Keys fan looking for something a little more underground.

[Listen to a stream of ‘Sky Throne’ below]