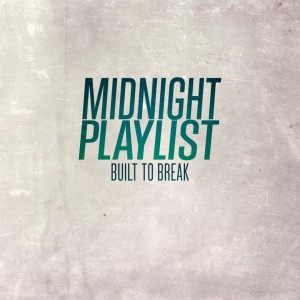 London’s Midnight Playlist are a four piece alternative pop-rock/pop-punk band, who bring a strong sense of good times and youthful spirit on their debut EP ‘Built To Break’.  There’s a real energy present from the very beginning of the opening track: a door slams, voices chatter, an amplifier buzzes…and with that, the quartet burst into life. That opener ‘A Year In Hell’ mixes pop-punk guitar chords and an alternative rock spirit, like a DIY collision between early Sum 41 and Don Broco; it’s a performance on which drummer Atish really excels.  Twin guitars chug and thrash in classic punk-pop style – even making room for a couple of lead flourishes – while lead vocalist Aaron cries each line with confidence, all the while happy to let his natural accent through, despite the attempts of a few vocal filters to make his voice sound more generic to the musical style.  You’ll have heard this sort of thing a thousand times before, but there’s an energy and tightness here – even obvious despite the limited recording budget – that makes this tune very enjoyable all round.

Similar in intent but a touch slower, the title track is a crashy rocker with plenty of staccato chords laying down a tight rhythm. The punk-pop speed carried over from ‘A Year In Hell’ is dressed up with a smidgeon of alt-rock in places allowing guitarist Jack to indulge in a grittier style throughout. Meanwhile, Aaron’s English-accented delivery is even more obvious – the blend of these tough elements results in the EPs best track. With a full sound and plenty of choppy guitars, ‘Tear Away’ fuses yet more pop-punk with a mere hint of alt-rock and clearly works to a formula which the band are very comfortable.  Despite this very formulaic nature – the bulk of this could be any number of tunes dropped by Fall Out Boy et al – closer inspection shows it still has a few notable elements.  Aaron drops in a particularly melodic solo (for the genre) and, again, Atish’s approach behind the drum kit shows more flair than most punky bands with such youth and relative inexperience at the time of this release.

Those looking for similar full-throttle punk-pop may initially find themselves a bit disappointed with the remainder of the EP, but for those with a (slightly) broader listening palate, the other three tracks bring some enjoyable guitar driven rock/pop sounds.  In terms of hooks, ‘Hollow’ is a winner, home as it is to a world of whoas and a repetitive chorus line of “I should’ve known”, which makes an impact right from the first play…and sounds better with each spin thereafter.  This is not so much pop-punk in the old sense but closer to the emo-rock as practiced by 30 Seconds To Mars, albeit without the horrible corporate blandness.  Of particular note during this number (once again) is the work laid down by Atish, who chooses to pepper everything with hi-hats almost constantly, a style that gives this number extra bounce.   ‘Undone’, meanwhile, is the weaker link, some of the riffs – although maintaining the same pleasing ring – don’t quite have the melodic sense these guys have already proved capable; a great chorus may have rescued things, but even there, things aren’t as instant.  The results: an average track that doesn’t necessarily leave a lasting impression.  Still…can’t get it right every time as they say…whoever they are.

A little more spacious, ‘Desperate’ fuses a few punky edges with a huge swathe of alternative rock, its ringing guitars, once again, leaning towards emo intents. While not as instantly thrilling as ‘Hollow’, it gives a better insight into Midnight Playlist’s scope as musicians – the lead guitars have a cleaner approach, but maintain a great presence, while bassist Ben takes on a greater role adding a very melodic lead bass throughout each verse.  Vocal harmonies are present, but perhaps should have been a little higher in the overall mix – the woos and counter-vocals add something whenever the chorus rolls around, but they never feel like much of a feature.  As a result, the chorus doesn’t quite punch in the way it should.

Midnight Playlist may initially promise riff after riff after riff on ‘A Year In Hell’, but the broader approach during the six numbers present on this release shows off a band with more to give than first impressions suggest.  For listeners who like plenty of jangly and rhythmic guitar chops, this EP should be met with open ears – spiky, accessible, high-energy goodness fills a flawed but enjoyable eighteen minutes.