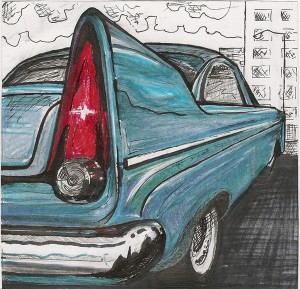 Armed with an unhealthy obsession with Donald Fagen, an admiration for Todd Rundgren and a liking of Badfinger, Malcolm Moore and David Myers (aka The 1957 Tail-Fin Fiasco) set to work in their quest to create proper “pop music for grown-ups”.  With all manner of invented characters and scenarios to share the British duo laboured hard, writing and recording at various locations into the small hours in an attempt to bring results that tipped the hat to their myriad heroes in a most appropriate manner.  Unleashed to an unsuspecting world at the beginning of 2013, their first release ‘Private Jet Flashback’ is a sophisticated work comprising of seven glossy pop/rock ditties.  The results are almost guaranteed to thrill those with a retro ear, a liking of an off-kilter lyric and – perhaps most importantly of all – a craving for tunes that have the kind of love and care afforded to those Steely Dan and 10cc records of yesteryear.

The opening number ‘Benny Rise & Shine’ brings out the best in the Tail-Fin sound.  Within just one verse and chorus, unfamiliar ears will soon ascertain whether this duo’s blend of rock and jazzy pop will float their proverbial boat…or not.  A strong bass underpins a hard piano line evocative of the US album radio sounds of 1977, over which the vocals bring the closest sounds the UK has to offer in terms of Donald Fagen sassiness.  Meanwhile, a few chords filling the instrumental breaks tease the audience into thinking things could break into a cover of ‘Footloose’ at any second.  The featured guitar break blends 70s rock with a jazzy lilt that screams Californian canyons and while the chorus isn’t the most instant, the repeated phrase of “take a bow Benny” eventually burrows into the subconscious.  In three minutes, these guys bring a retro-pop kick that’s almost unmatched by any of their contemporaries – if not for the slight shiny edge that twenty first century recording techniques bring, you’d almost entirely believe this had spent time in a record company vault awaiting discovery.  For a second bite of this musical cherry, things get even better.  While neither David’s lyrics or Malcolm’s musical arrangements ever hide their love of Steely Dan (as you’ll discover as the disc progresses), the epic ‘I Love The Smell of Bacon In the Morning’ blatantly flaunts melodies which are a clear homage to ‘Show Biz Kids’ with a mix of piano and bass once more.  Tipping things farther towards Danville, this number brings a perfect collision of music and lyric; of the mundane and surreal; a mention of a popular British supermarket hobnobs with Hollywood movies and Robert DeNiro in this imaginary universe, while hard-struck and sun-filled rhythm guitar chords add an extra layer of old fashioned radio-friendliness to something that’s already pretty fab.

‘Clean Break’ kicks off with a deep guitar tone and a hard white funk, so typical of the Tail-Fin’s preferred approach. The choppy interplay between guitar and keys during its verses pulls more influence from ‘Countdown to Ecstasy’ with abandon, while a strong lead vocal lends an equally tough melody.  With the push of the guitar underpinned by clanking keys, this has a near irresistible groovaciousness.  For what passes as a chorus, the duo shift gears from westcoast pop/rock into a soaring melody that sounds like a quasi-showtune, yet somehow still manage to make everything sound utterly convincing, despite bordering on the camp – it’s amazing what you can get away with if you play everything absolutely straight.  Just as you’ve been lifted to another place, it’s back to the original groove for another straight run through before tailing off with a fairly forthright guitar break that sounds like a rough take by Skunk Baxter.    As things fade just before the three minute mark, the band clearly feel this tale of moving on has already been told, but as the receptive listener, such a premature exit feels unnatural.  Despite this, it’s still a strong number.

With an intermittently struck Fender Rhodes, ‘If I Had a Heart’ begins a maudlin journey that’s full-hearted yet musically much sparser than its peers.  The love of Steely Dan still shines – frankly a healthy liking of that band’s classic work is essential for a full appreciation of this release – but the lulling arrangement is perhaps closer to something from Mike Viola’s ouvre, especially given the slightly cracked vocal that tackles each line with a lump in the throat.  …And just as you’ve tuned yourself into this low-key quasi-waltz, our protagonist suggests if he had a heart “he’d be sorry” and his broken relationship “would be gold” and it’s all over.    It’s a track that shows a much simpler side to Tail-Fin’s song writing – both lyrically and musically – and as such, it’s very much the odd man out here.  Never unpleasant – not even with its near self-pity – but it never quite reaches the gold standard of its closer peers.  Moving on quickly, ‘Postcards From The Boys’ shifts into high pop gear, aiming straight for the head and heart with a melodic hook.  Simple sentiments of love collide with hazy memories of plutonic friendships in an arrangement best described as a radio filler from those golden days of AM radio. Clavichord funkiness drives the verses, while a love of pure pop shines on a great chorus. Complete with boinging juice-harp sounds and a crisp noodling lead guitar that doesn’t mess around, it soon becomes obvious this isn’t just a good pop song – it is potentially one of the band’s best.  There’s some way to go before they create a masterpiece of the status reached by Andrew Gold’s ‘Lonely Boy’, but hey, it’s a start.

With a rising piano motif, ‘Not Brenda’s Song’ employs a dual vocal alongside a harmony filled strut that’s three parts 10cc and seven parts influenced by their beloved Donald Fagen. Seemingly more basic than many of the Tail-Fin arrangements, the vocals are up front and centre waiting to snare all passing ears with a slightly jazzy melody and repetition of the title line. Digging deeper, a gentle bass dances and this is far from straight-up seventies pop fare; but whereas so many numbers win out with a confident musical structure, it’s clear that vocal approach delivered throughout these three minutes is key to its success.  It’s weaker than some of the Tail-Fin arrangements for sure, but then, not everything can employ a kitchen sink approach and Rundgren-esque confidence…  Taking everything from their impressive bag of tricks, ‘Scenes From a Fell-Running Year’ shuffles with a late night smoothness.  Driven by a piano part and bassline – as per so many of this band’s tunes – the bell-like clarity on the keyboard work during this number is worthy of Fagen’s own ‘Nightfly’, while the clean vocal harmonies do their utmost to ensure some strong melodies are in place throughout.  Again, if you don’t have even the merest interest in Steely Dan, their general vibe will leave you cold; but for those happy to indulge in fine homage, another jazzy guitar break and a heartfelt sentiment are on hand, providing a soundtrack that shows off the best side of these obsessive oddballs.  They know, perhaps as much as Sweden’s State Cows, that there’s nothing wrong with milking an influence…and since their emulation of Fagen/Dan is so close, they’d be fools not to try and make something of it.  You can’t hide what you are at heart…and these guys are Steely Dan obsessed. Since they’re so adept with their own hooks, of course, their material often feels like a step up from mere tribute…and ‘Scenes From a Fell-Running Year’ is no exception.

*
Capitalising on having built a strong online following, in the last quarter of 2014 Tail-Fin reissued most of the previously download-only ‘Private Jet Flashback’ as part of  special edition CD celebrating their work to date.  Six of its seven numbers are joined by three of the four tracks from the ‘Cruise Control’ EP.  ‘Flashback’s own ‘I Had a Heart’ and the EP’s ‘Breakfast of Kings’ (the latter arguably the weakest of the band’s numbers up to this point) are cast aside.  A replacement comes in stand-alone track ‘Jackie & Norm and The Hairdresser to the Star’.  This tune doesn’t break new ground for the duo – being a fantastic example of both their love of the retro sounding Fender Rhodes keyboard and sardonic wit – but it doesn’t really need to.  In this typically bonkers tale, the titular hairdresser argues against claims that he plagiarises musical ideas.  No thievery, none at all: he only washes ELO’s hair.  …So, that’s how Jeff Lynne’s bouffant locks became so huge…

Naturally, those already familiar with the 1957 Tail-Fin Fiasco will already have most of the material on the compilation via the previous downloads, but the opportunity to own it on a bright, shiny 5” silver disc will be a most welcome one indeed.  For those yet to have the pleasure, pick up these recordings as soon as possible, whether as part of the original downloads or the career overview disc.  The obsession with Steely Dan is so strong that The 1957 Tail-Fin Fiasco could hardly claim to be original, but in terms of homage, they’ve often got things absolutely spot on. Pop music for grown ups rarely sounded more sophisticated.