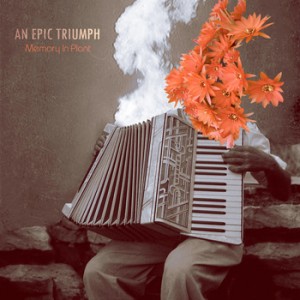 Rarely content to settle, the sounds on this debut EP from Tel Aviv based avant-garde collective Memory In Plant are almost as surreal as their choice of sleeve art.  Their music is spasmodic, electric and occasionally just wilfully difficult.  That’s not to say for those of a certain disposition it won’t have entertainment value – in between the jump cuts and experimentation, pieces of great music creep through the cracks – but ‘An Epic Triumph’ is not always the easiest listen.

There’s no easing in gently either.  ‘Memory Inplant’ consists of a minute and a half’s worth of droning noises.  The guitars screech like an old fashioned computer modem, electronic sounds add to the general melee and worldless vocals wail and moan banshee-like throughout.  This is clearly a step into a dark, unsettling and futuristic musical landscape.  At the point where this atonal sound begins to feel somewhat trying, ‘This Love’ – a track issued prior to the EP release – arrives with a surprising melody.  Clean toned guitars sound incredibly inviting, calling out with a bell-like clarity, before disappearing under a weight of dubby bass.   With the arrival of a filtered vocal, everything branches out into dream pop territory and appears settled, but nothing could be farther from the truth.  The dream pop appears as brief flirtation – complete with more of that fabulous guitar sound, before a few bard of jangly indie rock, then about thirty seconds worth of quasi-dubstep and a few noisy guitar loops.   Continuing in a frenetic style – which almost feels like the madness of side one of Todd Rundgren’s ‘A Wizard/A True Star’ condensed into two minutes – multi tracked vocals hint at old school prog rock a la Gentle Giant with voices repeating set vocal phrases before coming to an abrupt halt.  It’s hard to work out where Memory In Plant are headed – or, indeed, what the thinking behind this is – but the fast pace and unexpected turns should keep any listeners entertained and frustrated in equal measure.  While there’s a feeling that full songs could have been created from each segment – especially true of the dream pop moments – as a sound collage, it works well.

For the next two numbers, things are more palatable, though neither track compromises their collective ideas when it comes to pushing boundaries.  The electronic moments that briefly surfaced during ‘This Love’ are given free rein during ‘Shame On Me’ which begins like a slap in the face with bottom end electronic loops and oddball vocal arrangements (subject to a huge amount of studio trickery).  Eventually, the tune manifests itself as almost lopsided reggae, hard guitar chords at the fore, before slunking into a wall of voices and sounds that bears little resemblance to a tune.  ‘Eyes Up’ blends electronic loops and jarring beats with vocal samples (put through the mangle) with elements of more traditional Israeli musical themes.  Acoustic guitars and Meditteranean moods conjure up thoughts of late 80s Eurovision, before MIP decide to drown everything in stretched tape effects and more big beats.  ‘Runny Veins’ takes those effects and really goes to town with them, offering the listener two minutes worth of backwards drones and spooked out moody vocals.  Percussion sounds are heavily treated to sound like rattling metal – an inspired choice pitched against some of the EP’s most natural sounds, before bottom end takes over with the sound of impending doom.   Want more?  You get an operatic vocal too.  If Memory In Plant’s main brief was to bring together two or three mismatched styles and make them work, they can consider these two minutes a resounding success.

The closing track is potentially the most interesting.  At first a slow, almost dubby arrangement sits below some ugly voices, bell sounds adding atmosphere. By the ninety second mark, the band have decided on a groove and begin to really cut loose.  Dancing basslines and off-kilter time signatures echo parts of Frank Zappa’s work with Adrian Belew – the brilliant bassline is joined by buzzsaw guitar sounds in a rather atonal manner – while the general adventurous nature of the piece also suggests this band has a King Crimson devotee among their number.  The groove never wavers, not even once shouting voices attempt to intrude – and it seems after various interesting experiments, ‘An Epic Triumph’ finds its true calling.  These six and a half minutes fly by, as the prog rock/jazz rock framework takes hold.  The drums adopt a fast jazzy groove, although everything is driven by the bass, frantically stuttering ever forward.  Atop this tight rhythm, there’s little going on by comparison, but attention should be paid to the guitar work – minimalist by comparison but absolutely essential to the collage of sound, it’s occasional shifting of keys and repetitive nature essential to the near hypnotic effect of the sound the band are clearly trying to convey. At the point everything disintegrates into an unsure end – via a few undecipherable voices, some clattering and a couple of jazzy chords, it’s impossible to not find yourself thinking where things may have ventured next…

With a huge collision of sounds shifting between brilliant, melodic, evil, jazzy, funky and frankly obtuse – sometimes all within the same track – the ironically named ‘An Epic Triumph’ constantly balances on a musical tightrope.  Genuinely progressive (rather than “prog” in the lazy, easily labelling sense), it’s an EP that needs to be approached with a completely open mind and a willingness to persevere.  Sometimes people need to have their comfort zones broken – and Memory In Plant are only too glad to help.