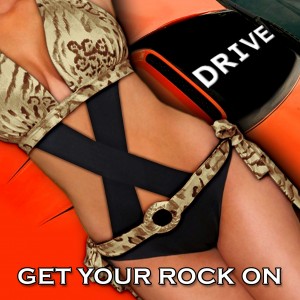 …And unnecessary is also word that could best describe the bulk of X-Drive’s audio output. While 80s influenced rock can still thrill when done well (see twenty-first century releases by Wigelius, Rick Springfield and Find Me), it takes more than musical competence to make a bunch of tried-and-tested ideas really fly. Great song writing is essential – and sadly, much like the reformed King Kobra’s first two releases for Frontiers Records – X-Drive are sorely lacking in that department. Sure, they’ve got some big choruses, but the bulk of the material is filled with almost every tired old rock cliché imaginable.

The title track stomps along in a meaty fashion, via a largely uninspired riff – the music made bearable by a crisp production job. The songwriting is incredibly poor; vocalist St. John wheels overfamilar themes of “mojo rising” (a concept that was dubious in the hands of Jim Morrison in 1970 and doesn’t thrill at all in 2014), while it’s decided that repeating the already embarrassing title several times passes as a decent hook. Meanwhile in the musical department, Lomenzo pumps out a singular bass note over and over like a gonzoid Derek Smalls, while Brunner’s guitar work – although often passing muster – rarely excites. His choice of lead break on this number is too brief by half: if he had any sense, he would have stepped up with a huge guitar solo in an attempt to distract from the overly simplistic elements elsewhere. This is genuinely embarrassing…but unbelievably (or perhaps just believably) ‘Love’s a Bitch’ is much worse. Following a mid-paced pounding drum, the band lumber through a lumpen arrangement with lyrics about being wronged complete with howlers like “that bitch is gonna bring you down”. Best avoided – if only the band had kept this to themselves… You’ve heard dozens of better variants of this over the decades; it seems hopelessly unsophisticated at the time of release in 2014.

Taking the old AOR blueprint and using track four as the big ballad, with ‘Baby Bye Bye’ things improve a little. Beginning with a fingerpicked acoustic and a curly voice, there’s an air of Scorpions reject about this – and a Scorps reject is better than most. These softer features are quickly given a kick via Fischer’s solid drumming and a couple of reasonable guitar breaks. But once again, any decent musical chops are declared null and void once the lyrics are taken into consideration. Every AOR ballad cliché has been explored – the band even insist on packing several into the chorus: not wanting to wait, the sunset, love coming back around and finally telling the song’s dumpee not to cry. It’s like this was created using some kind of AOR handbook – absolutely nothing here has any real sense of imagination or flair. Mid paced rocker ‘California’ utilises some enjoyable choppy rhythm guitar work for its verses, ensuring a half-decent tune, but it quickly falls on its arse. Within the first line the omnipresent AOR “midnight train” gets namechecked; a familiar “rocket queen” also figures somewhere in proceedings, while the songs protagonist is clearly not easily embarrassed – he’s happy enough to tell us he has a “rock ‘n’ roll bible”. The only saving grace during this number is a strong use of harmony vocals on the chorus where a choir of rock voices call “California” with confidence…and then fail to back that up with anything else. Another case of Brunner thinking its easy to emulate all those 80s AOR classics and coming up short.

The album’s second half is equally predictable and often half-arsed. ‘Rattlesnake Eyes’ kicks off with a sleazy hard rock riff which promises a great deal. The rhythm section play a solid role, chugging along with an almost unshakable groove – Lomenzo occasionally rising to play a couple of interesting bass fills – but once again, the lyrics…the lyrics are just bad. In almost record time there’s a penile euphemism and various other dubious elements. St. John appears more knowing here than on the other material, choosing to deliver sub-David Coverdale material with a sub-Coverdale bluesy croon in places, leading to what is certainly his best performance on this long player. The lolloping early 80s rock of ‘Just Can’t Say’ brings a couple more Whitesnake inspired moments on the verse – largely thanks to a mid paced riff that’s very familiar (although you’ll hear Snakecharmer use similar to far better effect on their ‘To The Rescue’), before switching gears for the chorus. It’s an average chorus (and average is about the best you can hope for), but the use of harmony vocals and a surprising European lilt in the vocal is – again – slightly reminiscent of the mighty Scorpions. This track is very much a case of close…but.

The full on hard rock of ‘Turn The Noize Down’ sounds like a King Kobra reject and is best just ignored, while the acoustic shuffle of ‘Change of Heart’ recalls the like of Mr. Big. There are some great harmonies to be heard throughout; the acoustic guitar has a very rich tone and the bass is pushed high in the mix to give plenty of warmth. Some twenty plus years after the acoustic rock boom (driven by MTV Unplugged), this arrangement brings nothing striking to the table, but the sense of intimacy between the instruments and a terrific bass part make this the obvious highlight. Perhaps X-Drive should have written a couple more acoustic tunes?

‘Change of Heart’ is very enjoyable and ‘Rattlesnake Eyes’ is okay blues-rock fodder but, on the whole, this is a largely awful record; almost as bad as King Kobra’s 2012 release. Any reasonable musicianship is spoilt by the lyrics. The material has a decent punchy sound thanks to one-time Led Zeppelin engineer Andy Johns (RIP)…but employing the greatest studio hands will never disguise the fact that Jeremy Brunner just isn’t the best songwriter. Maybe give Desmond Child a call, mate?