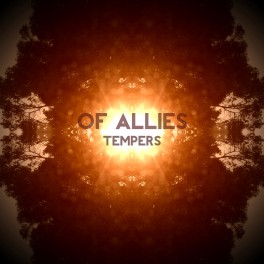 Together for only a year at the time of its release, ‘Tempers’ by UK alt-rockers Of Allies shows a strong sense of focus and of self-belief.  The material doesn’t always show a great range of styles, but essentially this is a good thing – a sign of a band that know exactly what works for them, resulting in five numbers that include no unnecessary padding.  Bringing much heaviness, their crunch oft balanced with an accessibility , the EPs opening track ‘Ghosts’ really makes a play for catching the ear as quickly as possible– and very much succeeds. From a clean intro comprising a couple of clean guitar chords and a soft, heart-rending vocal, the band quickly branch out into a somewhat rhythmic piece, led which drummer Danny Barrick, rattling off his snares with speed.  This is intercut with a heavier chorus riff, the guitars adopting a dirty approach. While clearly comprised of three distinct parts, the bands strong feeling for melody gives everything a natural feeling of togetherness.  It’s a tune that should appeal to fans of bands in the Chevelle mould – heaviness with a very tuneful undercurrent.

‘Our Decay’ tinkers with complex alt-rock touches as a choppy melody drives punchy verses over which vocalist Rich Nichols takes the bulk of the tune.  While enjoyable, it is on the chorus where the band really go for broke – the twin guitars of Rich Nicholls and Tom Hewson chugging heavily, creating a riff that the likes of Sevendust and Taproot have previously excelled.  Nicholls, meanwhile, shows a voice with a reasonable range.  A decision to clean up his performance via some gentle filters doesn’t so much smooth out his delivery as ensure this doesn’t sound like a 90s throwback. Bringing in an extra edge of heaviness (without sacrificing any of their previous tuneful qualities), ‘In Screens’ is perhaps the strongest of the EPs tracks, with bassist Nick Tyldsley getting to lead the charge with a more distinctive sound, his bottom end rattle driving the verses.  Elsewhere, as usual, guitars crunch rather heftily – during the intro the twin guitar assault makes the very best of a wide stereo split, while on the chorus, they help flesh out a very strong melody.  Good riffs, a very pleasing vocal performance – this shows off the best of the talents within Of Allies.  It’s easy to imagine those who still love Fuel’s debut album (1998’s ‘Sunburn’) getting a huge kick out of this.

Moving towards something slower and more atmospheric, ‘In Stasis’ melds a strong rhythmic backline with occasional ringing guitars, moving everything away from crunchy alt-rock and more into the realms of art-rock.  The sounds hint at a need to break into math rock complexity at any time, and yet the band resist, knowing the melody and hook is more important than sheer complexity.  Hints of Arcane Roots jostle against the more typical Of Allies sound, though vocally the two bands are a world apart.  It’s great to know they’ve got a few extra tricks up their collective sleeve and they seem as adept at tackling the atmosphere driven as they do churning the heavy riffs.  Play Dead’ seems to largely repeat this successful formula set down by ‘Our Decay’ – proving Of Allies have settled on a sound that really works.  At the point where they seem just about ready to wrap things up, they introduce a hugely heavy riff that crushes the end of the track. It’s so immense, that alone seems to up the ante in terms of how far they may be able to push things, very much finishing the release with a feeling of looking forward.

Dark and heavy, yet will an all-important over-riding sense of the melodic, ‘Tempers’ is an EP with much to offer.  The band has clearly worked hard to ensure their songs are fully formed before delivering anything for public consumption.  With no obvious weak link within its five numbers or the abilities of the four musicians, for this Hull-based outfit, their first release is a creative success on every level.