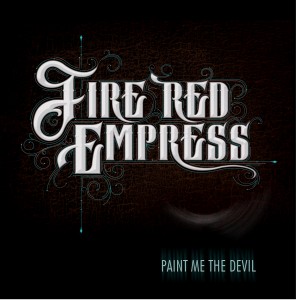 This EP from hard rockers Fire Red Empress serves as a not just a taster of what’s over the horizon for the UK band, but also a timely reminder that if self-released material can sound this good, the days of the major labels calling the shots are seriously numbered.  Decamping to Denmark and hiring Jacob Hansen for production/studio duties, the band clearly made the right choice – even before taking note of how good these three songs actually are, it is almost impossible not to be floored by the actual sound. Having previously produced Epica and Evergrey, Hansen clearly knows the best way to get a big sound out of his clients.  This is no exception – hard, loud and seriously well-rounded, it’s just perfect for the brand of hard rock on show.

Lead track ‘Left Unspoken’ brings plenty of excitement as a full-throttle riff thunders headlong without any delay.  Bringing a classic sound somewhere between Black Stone Cherry and the faster moments of ‘Powertrippin’-era Almighty, this is a tune with a sizeable punch.  Lead vocalist Nik Taylor-Stokes has a delivery which taps into a post-grunge drawl that’s perfectly tempered by a simple chorus loaded with a surprising amount of harmonies. By the time the lead break rolls around – a few bars of old-school whammy bashing over dirty notes – Fire Red Empress sound ready to take on the world.  After throwing in the chorus once again for good measure, the track bows out as strongly as it arrived three minutes previously with a combination of a punchy riff and hard kick-drum.  The title cut brings essentially more of the same – perhaps a little too similar in places – but then, it’s a great sound.  The driving riff doesn’t vary too much from the previous track; there are a couple of moments where things sound a touch more spacious, but the differences are slight.  The mix of solid riffing and top-notch production bring hints of Mark Tremonti’s ‘All I Was’ on the bulk of this track, while a brief interlude introducing more atmospheric notes hints at a love of stoner rock.

Showing off a slightly different approach, closing track ‘Behind The Veil’ slows things down at first, cranking out a Sabbath-esque riff designed to crush everything in its path.  Using that same riff to fill the chorus ensures metal fans will be sated – in this case, heaviness is far more important than any lyrical hook.  During the verses FRE settle for a contrast, a mix of rattling bass and clean toned guitar leaning further towards the gothy (as per The Cult circa 1995 meeting with the darkness of Danzig’s ‘IV’).  Despite these lighter touches, it’s the Sabbath-isms and a very strong vocal performance that leaves that indelible mark.

This debut EP shows off a few obvious influences, sure, but the band pulls off everything quite naturally, never sounding like mere clones of the bands they so obviously love.  Knowing the importance of a good chorus and a sense of melody ensures they never resort to sheer bluster in an attempt to blindside the listener.  If this brand of hard rock is your thing, you’ll click with this release instantly – a very strong debut, indeed.