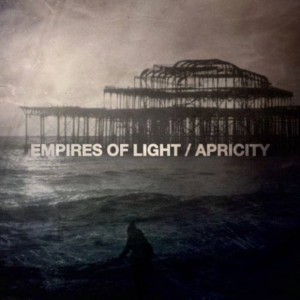 Born at the very beginning of 2014, Empires of Light is a post rock/extreme metal band sprung from the ashes of History of the Hawk, sharing members with doom metal band Opium Lord.  On their first release ‘Apricity’, dark tendencies are abound as the quartet of musicians seek to explore as much musical ground as possible within a relatively short duration, resulting in twenty five minutes of both distorted sonic spaciousness and sledgehammer riffs.

Beginning with a dark and lengthy piece, the epic ‘Sumerian’ represents the band at both their most adventurous and surprisingly most accessible.  Following a rattling snare drum setting the beat, the band find a hypnotic groove that’s closer to goth rock than any forms of metal.  The guitars cry with a ringing metallic edge but ultimately deliver something haunting and tuneful, under which the bass loops and adds much warmth.  Hints of My Dying Bride can be heard alongside a huge influence from post-rockers Godspeed You! Black Emperor and even after several minutes, this repetitive tune doesn’t even begin to outstay its welcome.  At the midpoint, however, the band shift up a gear: the metallic guitars throw themselves headlong into ferocious thrashiness (although it should be noted, the outcome is not thrash, per se); the drums are harder still – particularly in the cymbal depot – and the vocals…the vocals are determined to separate the men from the boys.  Those who hoped that Empires’ brand of heaviosity would be complimented by a deep croon (as perhaps suggested by the number’s opening movement) may be left wanting.  The chosen vocal style is a throat-bleeding rasp; an unrelenting husk of noise that ensures most of the lyrical content remains inaudible.  It works, though; after a few listens to tune in, the whole affair represents a particularly fine eight minutes.  In splitting the number in half, the band seek to please so many listeners – those who enjoy post-rock in all it’s sprawling instrumental glory will undoubtedly find much to love in the instrumental passages, while those seeking progressive forms of black metal may just find their ears pricking up during the climactic bursts of noisemaking…

Having already shown off their gothic edge and proven they know how to build tension before exploding into a ferocious explosion of sound, their next move is somewhat intriguing…perhaps even frustrating.  You may expect more of the same – perhaps with the intensity cranked an extra couple of dials – but you’re certainly not going to get it.  ‘Dalmatia’ is minimal in the extreme.  Pulling as far back from structure as far as possible, the band taunt the listener at first with the kind of cold, metallic drone that best befits an intro to a black metal epic. Except, in this case, it is not just an intro; it’s a full six minutes of distortion used as a sound collage: no percussion, no intermittent bass, just maximum drone.  It may be of interest to some listeners pushing towards music as art, but even then, given that there’s not even a really obvious change in pitch at any point, it’s probably never destined for a lot of listening time.

Those approaching Empires of Light expecting doom metal finally get some solace on the third and final number, ‘Meredith’.  It’s intro alone ensures that the merely curious don’t leave with disappointment, as downtuned riffs emerge, lumbering and slow in classic doom metal style.  The earlier screeching vocals are intercut with a deeper growl, providing the EPs most rounded performance with regard to all-out metal.  With a Sabbath riff that sounds like it’s been weighted down by a brick on the turntable, Empires don’t mess around – combine that with a melodic death growl and this has an intro of sheer force, but it doesn’t last…  Just as the metal finds its feet, the instrumentalists twist things back towards post rock: a shimmering, clean toned guitar sounds great against a rattling, almost jazzy drum part.  …And then, just as that takes hold, it’s back to intense riffing, although the opening doomy grooves are nowhere to be heard.  On the third (and closing) movement of this rather frenetic arrangement, the guitars have an odd tone, one much closer to post-rock than doom metal, while behind the wall of sound there’s a detuned element that owes a little to Thurston Moore, over which other guitars churn out longer drone filled sounds and the vocals revert back to rasping.  It results in a number that’s almost impossible to take in all at once; several listens are necessary in order to pick apart the multiple layers.   Again, those vocals are of an acquired taste, but in terms of extreme metal and post-rock there’s some good playing to be heard.

This EP is unlikely to speak to those who don’t venture into extreme metal territories from time to time, but then, Empires of Light surely didn’t set out to create something of mass appeal.  This is as much an artistic statement as it is a musical entity.  The fact that all three tracks include passages that sound like the work of three different bands is  either a stroke of genius showing the quartet’s versatility, or else just maddeningly inconsistent… On the basis of the two “proper” songs, however, Empires of Light prove themselves a project with much to give, particularly for the more thoughtful metal fan willing to invest the time.