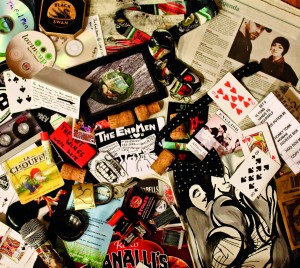 With heavy blues grooves and a hoarse vocal, The End Men made a huge impression on their second release ‘Play With Your Toys’.  Uncompromising, loud and brash on the surface, yet home of a carnival of characters, the band pushed the limits of the two-musician format.  Their follow up ‘Odds & Ends’ does exactly what it says on the rusted tin gathering together some unheard gems, plus providing a proper home for 2013’s two track release ‘Work’/’Ratking’.

Far bluesier than anything from ‘Play With Your Toys’, it’s clear why the Brooklyn duo felt ‘Work’ had no place on that LP.  The main groove is looser, in parts more basic.  Frontman Matthew Hendershot fills as much space as possible with his larger than life growl, at once commanding attention with the stark phrasing of “shut up and work!” It’s not all threat though – there’s twisted fun here too, as he shifting between aggression and almost Tom Waits parody during an interlude where a piratical heave-ho rears up.  While the vocal is huge – unavoidable, even – the tune’s best qualities come from a stretched slide guitar motif; a sound so seedy it’s possible to imagine it delivered via a jazz club sax.  A saxophone appears in due course but parps oddly, almost like a frightened horn, before slinking back into the smoke.  Its original flipside, ‘Ratking’ is business as usual for The End Men: a slow groove lurching menacingly from Livia Ranalli’s kit as she smashes her way into a raw percussive cacophony.  Topping the cymbal-heavy rush, the dirty guitars settle for an equally raw twang, everything coming together to bring you a basic yet thrilling garage-blues affair.

The piano and gypsy violin of ‘Salute’ presents an odd, unfamiliar vocal at the outset as a heavily accented performance from guest Andrea Parodi depicts one of the many characters in the End Men’s late night drinking emporium.   Where there’s often a heavier edge to much of the band’s material, there’s absolutely no attempt here at hiding a deep-held love for ‘Heartattack and Vine’ era Tom Waits, with Hendershot launching into a performance that on occasion could even pass for the great man himself, while Sean O’Neil fleshes everything out with some seedy ivory tickling.  Not wanting to sound to limited or predictable within the confines of their blues, ‘A Storm Is Coming’ every bit as ominous as its title suggests.  Its sparse arrangement allows Ranalli to indulge in some rattling percussion, with a touch more flair than is oft required – her clanking woodblocks and tinkling bells working with the otherwise typical steady beat.  Hendershot, meanwhile, adopts a similarly spacious approach to his performance, a ringing guitar throwing out occasional notes clearly.  Vocally, of course, there are no surprises – it’s sinister growls and rasps for the duration…but, naturally, if you like The End Men, that’s likely what you want from him.

Lovers of heavy blues in a Blue Cheer/Hendrix fashion may get a buzz from ‘Whiskey Rain’, a tune with a hefty riff for a heart. In the style of blues as practitioned by late 60s hard rock outfits, this is dark, beautiful and although completely familiar in its sense of knowing retro cool, it’s also hugely thrilling.  While not necessarily as inventive as ‘A Storm Is Coming’, scratchy vocals, a gritty slide guitar and all round heady groove come together to make this the EP’s best tune.  Similarly aggressive, ‘The Wolves’ takes a huge riff and crashing drums, ramming home DIY fuzz-blues with a lack of sublety worthy of the UK’s own Brockley Forest. More of an acquired taste, ‘War’ shows off a hugely theatrical side melding a lop-sided march with a guest vocal from Dion “Freewheelin Troubadour” Power.  The end results, while totally worthy of The End Men’s catalogue, do not necessarily translate as well as they might. It takes a few plays before it starts to click for sure. It’s also the kind of tune that comes from the musical theatre tradition – and as such it really needs a visual stimulus.

This assortment of discarded toys and broken dreams manages to sound like more than just a mere collection of offcuts.  While naturally some tunes are better than others,there’s no sense of anything appearing underpar here; just dark groove after dark groove in the End Men tradition.  Those who found shadowy solace in the whiskey soaked bar-rooms and ugly circus freaks of ‘Play With Your Toys’ will find this an invaluable seven track compendium; those many, many unreached ears, meanwhile, could use this as a handy primer.